Taking a look back at last year's important moments at St. Joseph's College 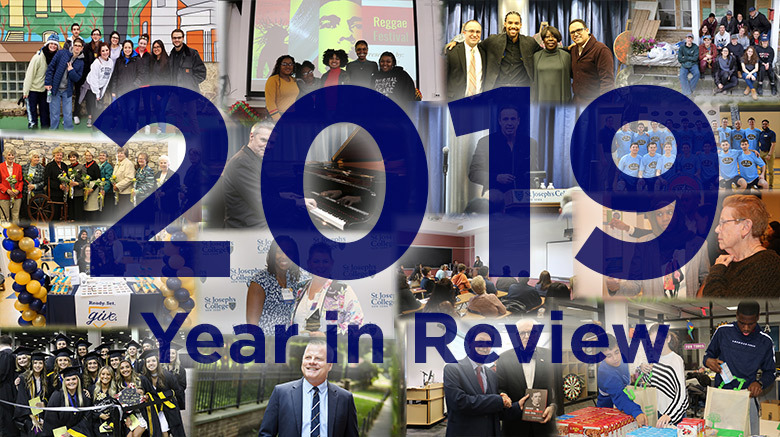 From celebrating its 100th graduating class to the College’s first-ever Giving Day and I💛SJC Week, St. Joseph’s 2019 was historic in more ways than one.

Join us as we take a look back at St. Joseph’s past year.

Growing in Faith and Service: SJC Long Island students visited Camden, New Jersey, and Agape, Massachusetts, as part of Alternative Winter Break. One of the largest community service efforts that SJC Long Island students participate in, AWB provides excellent opportunities for students to immerse themselves in the College’s goal to serve and make the world a better place.

Brooklyn’s New Turf: SJC Brooklyn opened the new St. Angela Hall Turf Athletic Facility on Jan. 28. The facility — outfitted for indoor soccer, baseball and softball practice — will go a long way toward keeping the Bears competitive in the Skyline Conference and within the region.

Black History Month: SJC Brooklyn students celebrated Black History Month by playing their own version of the popular game show Jeopardy and by honoring the impact reggae music has had on black history. SJC Long Island welcomed the self-styled “Queen of the Blues” Bettie Mae Fikes and Emmy Award-winning producer Pierce Freelon to speak — and sing — about slavery, the Civil Rights movement and freedom.

St. Joseph’s College Hosts its First-Ever I💛SJC Week: St. Joseph’s alumni reminisced about the best friends they made, the people who left a lasting impact, their favorite hangout spots on campus, the relationship that led to marriage, the classes they loved and the memories they will never forget from their time at SJC.

National Catholic Sisters Week 2019: At St. Joseph’s College, we’re inspired by the women religious who dedicate their time and energy to the institution. During National Catholic Sisters Week 2019, students, faculty and staff had the chance to learn more about some of the sisters who help make the College community what it is. SJC Long Island also hosted events for the College community about the Sisters of St. Joseph, their rich history and their passion for social justice.

Giving Day Success at St. Joseph’s: More than 1,100 donors contributed over $75,000 during St. Joseph’s College’s first Giving Day on May 1 — obliterating the fundraising project’s goal to raise funds from at least 400 donors. Those who contributed chose to support an array of worthy projects proposed by St. Joseph’s students, faculty and staff, including the SJC Fund, the Golden Eagle Athletic Fund, the Student Emergency Fund, the Alternative Spring Break Fund and the SJC Bears Athletics Travel Campaign.

Student Research Symposiums: More than 60 students from over 10 different disciplines presented their research to classmates, family, faculty and staff during St. Joseph’s annual Student Research Symposiums. Students at SJC Long Island presented their posters and papers on May 4 in the McGann Conference Center and the surrounding classrooms. SJC Brooklyn’s symposium took place May 7 in Tuohy Hall.

Alumni Achievement Awards at SJC Long Island: A veteran nurse, a dedicated ambulance volunteer and the leader of a homeless outreach center were the honorees at the seventh annual St. Joseph’s College Alumni Achievement Awards in Health Care and Human Services. Kevin Dahill, president and CEO of the Suburban Hospital Alliance of New York State (SHANYS) served as the featured speaker.

Commencement: More than 1,500 students in St. Joseph’s College’s 100th graduating class collected degrees in front of more than 7,000 family members and friends across the College’s two commencements in May. From SJC Brooklyn, 216 undergraduate students and 108 graduate students earned degrees at the May 19 ceremony in the New York Marriott at the Brooklyn Bridge. St. Joseph’s President Donald R. Boomgaarden, Ph.D., conferred degrees on more than 1,200 graduates at the SJC Long Island graduation ceremony at the Nassau Veterans Memorial Coliseum May 29. 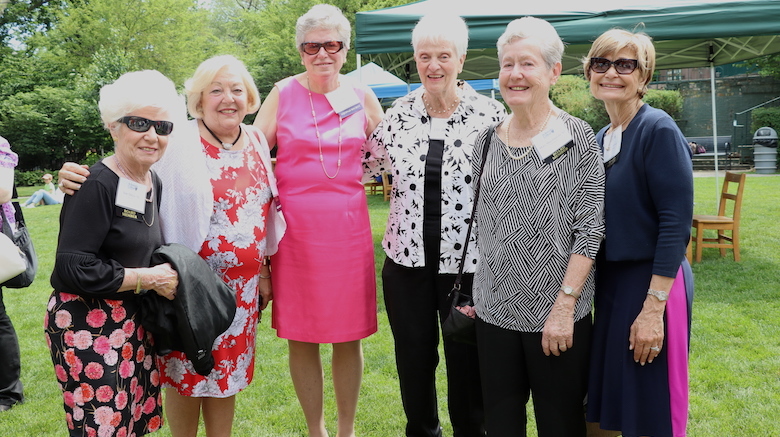 Dillon Center Commemorates 50 Years: More than 85 supporters of the College and the Dillon Child Study Center — including faculty, staff and alumni — gathered Saturday, June 8, in the Bloodgood Garden for a Champagne Brunch celebrating the 50-year anniversary of the Dillon Center. The brunch featured encouraging speeches from President Boomgaarden; S. Patricia Dittmer, a 1972 SJC Brooklyn graduate and an assistant professor of child study; and Dillon Center Director Susan Straut Collard, Ph.D.

SJC Long Island Ushers in New Executive Dean: Eileen White Jahn, Ph.D., started teaching undergraduate and graduate business classes at St. Joseph’s College in 1998. More than 20 years later, she started her new role as interim executive dean of SJC Long Island on July 1. Dr. Jahn continues to serve as chair and professor of the Department of Business Administration and Marketing — a position she’s held at the College since 2001.

SJC Brooklyn’s New Interim Executive Dean: Raymond D’Angelo, Ph.D., took the helm as SJC Brooklyn’s interim executive dean July 1, after spending more than four decades teaching social sciences. Dr. D’Angelo, who has taught at SJC Brooklyn and SJC Long Island, has been the chair of the Department of Social Sciences, as well as program coordinator for the human relations program at SJC Brooklyn since 1992.

Growing their Roots at St. Joseph’s College: More than 400 first-year students gathered in the John A. Danzi Athletic Center Gymnasium at SJC Long Island on Aug. 27 for Orientation. With the day’s theme of “Room to Grow,” freshmen were reminded that SJC Long Island is the perfect place to continue developing current interests and to cultivate new ones.

New SJC Heroes Arrive on Campus: Incoming freshmen and transfer students at SJC Brooklyn were greeted with a cheer from a pack of spirited orientation leaders and campus mascot Vandy the Bear as they entered the gymnasium Aug. 28 during New Student Orientation. The theme was SJC Heroes.

Investiture: New students at SJC Brooklyn and SJC Long Island attended ceremonies at their respective campuses for Investiture — a 104-year old College tradition that marks the first academic event of the year for the freshman class. It’s also an opportunity for family members and loved ones to see their children make the leap to college life while donned in caps and gowns.

Reflections of Four Decades in Patchogue: On Sept. 4, 1979, St. Joseph’s College’s new campus in Patchogue, Long Island, rolled out the “red carpet” — in the form of an evening picnic — to 400 students at its “Let’s Get Acquainted” day. Classes kicked off the next morning. Over the decades, the campus — now called SJC Long Island — experienced enormous growth. Enrollment skyrocketed to over 4,000, while the campus added an athletic center, library, business technology building, wellness center, small playhouse and outdoor field complex. To commemorate the campus’ 40th anniversary, we gathered reflections from SJC community members who were there when it all started.

Callahan Library Turns 30: SJC Long Island’s library received its own building in the fall of 1989. The red ribbon used during the actual ribbon-cutting ceremony was displayed at the Callahan Library on Sept. 18, the exact day the library opened 30 years ago.

Three in Five: The College announces new articulation agreements with Suffolk County Community College (SCCC) that give students the opportunity to earn either a master’s degree in forensic computing or human services leadership at SJC Long Island — all just five years after getting their start at SCCC.

Bear Cave Popularity Soars: The SGA received more than $7,000 to help improve the Bear Cave throughout the year. SJC Brooklyn alumni who donated to the cause returned to campus Oct. 29 to see the new recreation equipment, which includes a pool table, foosball table, television and other games, in use.

Veterans Day: The SJC Brooklyn community hosted a special Veterans Day ceremony. SJC Long Island hosted Veterans Awareness Week, which kicked off with the annual Veterans Day celebration on Nov. 11, and included a special visit from Daniel Murphy, the father of Navy SEAL Lt. Michael P. Murphy, who was killed in action in Afghanistan in June 2005.

Thanksgiving Food Drives: SJC Brooklyn and SJC Long Island got into the giving season with Thanksgiving food drives that benefitted the local communities. 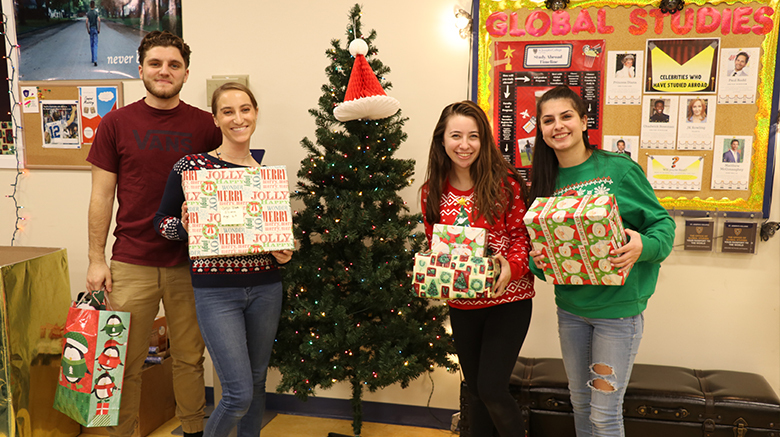 The SJC community comes together to give to those in need during the holidays.

Spreading Hope for the Holidays: The St. Joseph’s College community teamed up to give to those in need this past holiday season. Events and fundraising drives across both campuses helped collect items for less fortunate families from nearby communities.

Coed for Half a Century