Taking a look back at big moments from the past year 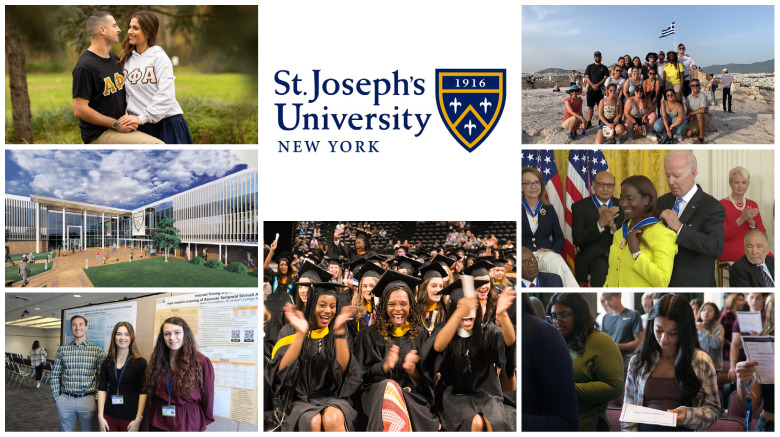 St. Joseph’s University, New York celebrated a lot of important moments in 2022 — chief among them was becoming a university. Here’s a look back at all the important moments at the Long Island Campus over the last year. Be sure to click through for the full stories, or click above for the Year in Review video.

Note: Links to stories from January – April 2022 refer to the University by its previous designation, St. Joseph’s College.

Living Our Mission Returns for a Third Season: The Catholic Faith Network (CFN) television series returned for a third season with SJNY President Donald R. Boomgaarden, Ph.D., as its host.

University Board Members Reminisce About Sisters of St. Joseph: In honor of Catholic Sisters Week, three members of the St. Joseph’s Board of Trustees discussed the cherished Sisters who had an impact on them during their time at the University.

Celebrating the 25th Anniversary of S. Elizabeth Hill’s Presidency: As part of its annual Catholic Sisters Week coverage, the University caught up with Sister Elizabeth A. Hill ’64, CSJ, J.D., to discuss her time as St. Joseph’s sixth president.

Class of 2022 Commencement Celebration: St. Joseph’s University honored the transformational journey of its Class of 2022 during the institution’s 103rd annual commencement ceremony Thursday, May 26, inside Nassau Veterans Memorial Coliseum in Uniondale, New York.

Explained: Long Island’s Abundance of Sharks: After six reported run-ins with sharks in just a few weeks, adjunct Biology Professor Matthew Berkhout ’09 discussed what may be causing the influx of our finned friends along our South Shore.

St. Joseph’s University Receives $120,000 from the George I. Alden Trust: The funds will be used to equip the new Student Center classrooms with cutting-edge technology.

St. Joseph’s Assistant Baseball Coach Saves Umpire’s Life: Andrew Aschettino was fast to act at a championship tournament game in Georgia this summer, when he rushed on to the field to perform CPR after the homeplate umpire collapsed.

Pursuing a Childhood Dream: After earning a law degree in 2019, Philip Branigan ’16 is pursuing an M.D., following his childhood dream of becoming a doctor.

‘Lessons and Carols’ Kicked off Christmas Season:  The event featured performances by the Long Island Campus Chorus, The Sharps, President Donald R. Boomgaarden, Ph.D., and other faculty and staff.

St. Joseph’s Students Spreading Joy Once Again: Student groups across the University supported causes close to their hearts during the holiday season.

A Holiday Message from St. Joseph’s University, New York: Members of the SJNY community gathered to wish everyone a happy holiday season.