A Love of Literature Brings the SJC Community Together 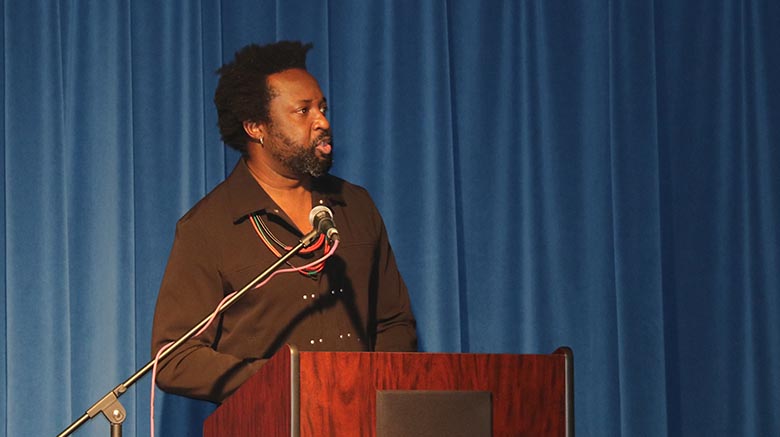 Author Issac Fitzgerald interviewed James about his book, covering a diverse range of topics, including his writing process, strategies for developing intricate worlds, and his choice of perspective used in the book.

“The fact is, one of the reasons why I love fantasy is because I’m a nerd,” said James, as the audience cheered in solidarity. “At any given time, I would much rather live at either Middle-Earth, or have the proficiency for the School for Gifted Youngsters, than on my actual street.”

James wasn’t the only writer self-describing themselves as a “nerd” for their literary interests at SJC Brooklyn that evening.

Ahead of the Brooklyn Voices event, Writer’s Foundry faculty member Alicia Mountain said being surrounded by other people who get “nerdy” about writing is one of her favorite things about the creative writing graduate program. She co-hosted a free virtual MFA Craft Session in Burns Hall, alongside Writer’s Foundry Director Lee Clay Johnson and faculty member Cleyvis Natera.

“The community rules,” Mountain said of the Writer’s Foundry. “I’ll start off by saying it’s so much fun. When you’re in school, or you’re at work — which is kind of what this is for some of us — and it doesn’t feel like either of those things. It feels like hanging out with other people who are as excited, and passionate, and nerdy, and goofy and as delighted about this art practice as we are.”

The Craft Session was an intimate virtual event attended by current and prospective Writer’s Foundry students. Johnson, Mountain and Natera took turns reading their work, showcasing the safe, but constructive, environment of such craft classes and workshops in the Writer’s Foundry. 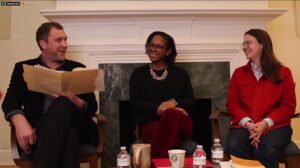 Johnson read an excerpt from a not-yet-published novel, Mountain read a selection of published poems, and Natera shared a published short story. Each piece reflected a different style of writing and gave insight into the experiences and personalities of the authors.

After the readings, prospective students asked questions about the Writer’s Foundry and the faculty member’s writing processes.

“I had a very fraught experience with publishing,” Natera said. “I worked on my novel that will be published in May for 15 years. I worked a full-time job, I got married, I was working a corporate job, and working on other projects — so there were a lot of times where I just felt like I couldn’t write because I felt like I failed because I was unable to get my book published.

“It wasn’t until I actually decided that whether I published a book or not I wanted to write anyway that my world kind of exploded,” she continued. “I started writing essays, and book reviews, and short stories, and then all of a sudden all of those things got published. For 15 years I published nothing, and then in the past four years I probably published 20 different things.”

Fostering the love of writing for the sake of writing, and the drive to master the craft of writing because it’s something the student enjoys, is a top goal of the Writer’s Foundry, explained Johnson.

“The aspect of a nontoxic, supportive community is really important (here),” Johnson said. “With that said, we hold ourselves and each other to the highest literary standards. But it’s really important to understand how to read a piece in a way that helps it become what it intends be and what you think it should be.

“And that requires excellent attention to what a piece is doing and succeeding in, and help it move in that direction,” he added. “That’s really what we focus on in our workshops — and not how something might be failing … It’s that kind of intimate, helpful, and yet rigorous experience that our workshops are great at doing.”

Click here for more information about the Writer’s Foundry and how to enroll.

James’ book “Moon Witch, Spider King” is the second installment in his acclaimed Dark Star trilogy, “African Game of Thrones.” The trilogy began with New York Times bestseller “Black Leopard, Red Wolf,” where Sogolon the Moon Witch proved a worthy adversary to Tracker as they clashed across a mythical African landscape in search of a mysterious boy who disappeared.

The mystique continues in “Moon Witch, Spider King,” as Sogolon takes center stage and recounts what happened to the boy, and how she plotted and fought, triumphed and failed as she looked for him. The vivid fantasy story also divulges the details of a century-long feud that Sogolon had with the Aesi, chancellor to the king — told from the perspective of a 177-year-old witch.

When James started writing the trilogy, he didn’t necessarily intend on the trilogy taking on different perspectives in the books. He told Fitzgerald it was a serendipitous result of his brainstorming process for “Moon Witch, Spider King.”

“I’ve always been interested in how perspectives view the same story,” said James, explaining his fascination in the way two people can recount the same event differently.

But keeping track of the different perspectives, characters and stories in his books is easier said than done. Fitzgerald pointed out that James’ office is full of maps and charts on the walls, guiding him through the writing journey.

SJC Brooklyn hosted the event in partnership with the Greenlight Bookstore in Brooklyn.