A Weekend in the Life: SJC Brooklyn’s Science Club 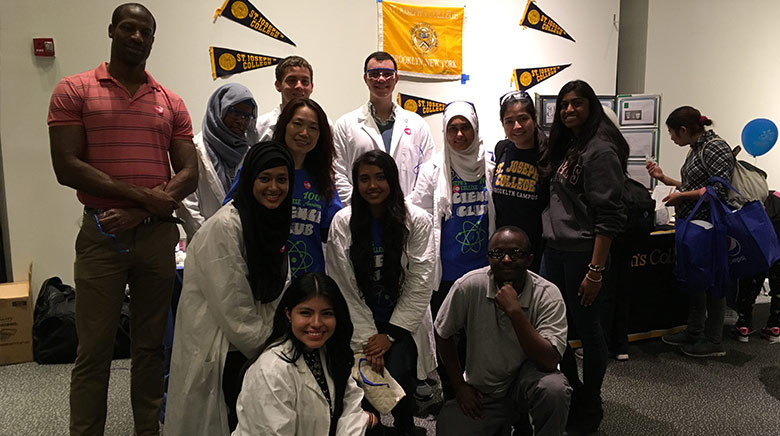 The weekend before Halloween, science club members had a lot to do — other than getting their costumes ready. On Friday, Oct. 28, SJC Brooklyn’s Science Club members taught students at the Dillon Center Halloween-themed science experiments, included two anyone can do at home:

1. Ollie’s Potion, which showcases what happens when you put liquid soap, vinegar, baking soda and yeast together.

2. Dancing Frankenworms, which shows how you can make gummy worms dance by bathing them in baking soda, vinegar, and much more.

Not only were the students fascinated by all the experiments, but the teachers were too.

Presenting at the MACUB Conference

On Oct. 29, biology major and science club president Christine Johnson presented her research proposal at the Metropolitan Association of College and University Biologists (MACUB) Conference at SUNY Old Westbury. This year’s research conference’s theme was “The Dance of the Genes: From Cancer to Conservation.”

Johnson’s proposal was visited multiple times by conference guests. Her research focused on whether or not carbon nanoparticles derived from supermarket bread have any affect on the soil nematode C. elegans. This was based off a recent study that first discovered the presence of nanoparticles in food.

Representing SJC at the Hall of Science

On Oct. 30, 15 science club members manned the SJC table at the New York Hall of Science’s Chemistry Day. This year, as in many previous years, SJC’s table was one of the most popular due to an engaging experiment: Super Shrinkers. Here, a plastic container made out of polystyrene is put in a toaster oven. Within two minutes, the container shrinks. Kids enjoyed drawing on the container and watching their creations “magically” reduce in size.

View all posts from Christine Johnson

A Sorority’s Philanthropic Focus on Diabetes