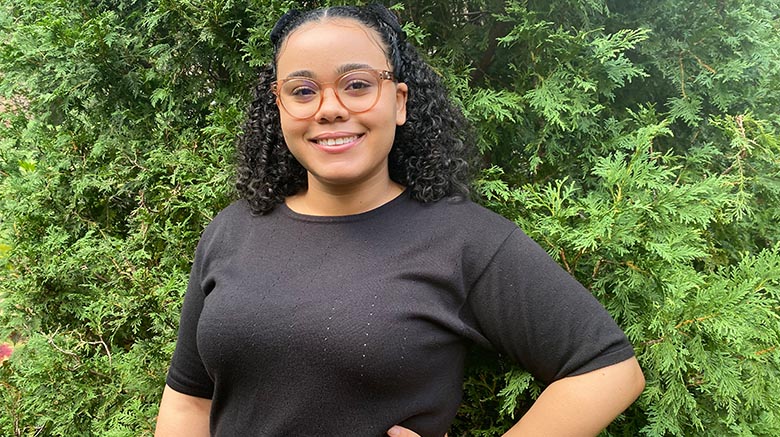 For Adailed “Adi” Marshall Garcia, the Academic Center for English Language Studies (ACES) program is a safe place to dream about her future as a nurse.

It’s an academic setting that bursts with resources to help her and her peers succeed as college students in a new country. And its tight- knit community provides a sense of belonging. The ACES program has been much more than a helpful resource for Ms. Garcia — it is family.

Ms. Garcia, a junior who came to the United States from Cuba as a child nearly a decade ago, remembers clearly her first visit to ACES in St. Angela’s Hall. Still a student at International High School at LaGuardia Community College, she felt an immediate connection with the program.

“What made me fall in love with ACES was the intimate, close relationship of the people in the program,” she recalled.

“I would say ACES is a big family that adopted me. One of my favorite resources are the tutors. If it weren’t for them, I wouldn’t be here.

“They help me organize my time and schedule, they help with my grammar and research papers, and they always encourage me to do better,” Ms. Garcia said.

The ACES program — celebrating its 20th anniversary — even connected Ms. Garcia with other nursing majors, who eventually formed a study group together. It was a much less intimidating way to meet new people, said Ms. Garcia, explaining she sometimes can be shy.

“Adi Marshall (Garcia) genuinely embodies the spirit of ACES,” Ms. David said. “Not only is she a highly intelligent and motivated student, but her generosity, creativity and intellectual curiosity sustain the community that we actively hold space for on campus.”

A Nurse in the Making

Becoming a nurse is destiny for Ms. Garcia. It’s difficult for her to remember a time in her life where she didn’t feel drawn to the medical field.

“Since I was a child, my biggest dream was being in a health-related profession,” Ms. Garcia said. “Some days I pretended to be a surgeon, others a doctor or a nurse.”

She was inspired to follow in the footsteps of her father, an Elmhurst Hospital nurse. She said it was difficult for her to study nursing while watching her father work with COVID-19 patients amid the pandemic — but her ACES community helped her persevere.

“Working on my nursing degree during the pandemic was a nightmare,” Ms. Garcia said. “It was impossible to concentrate on the classes. It was painful seeing my dad come from his job where most people were dying. Yet … through the (ACES) tutors and study groups, I was able to come closer to my goal.”