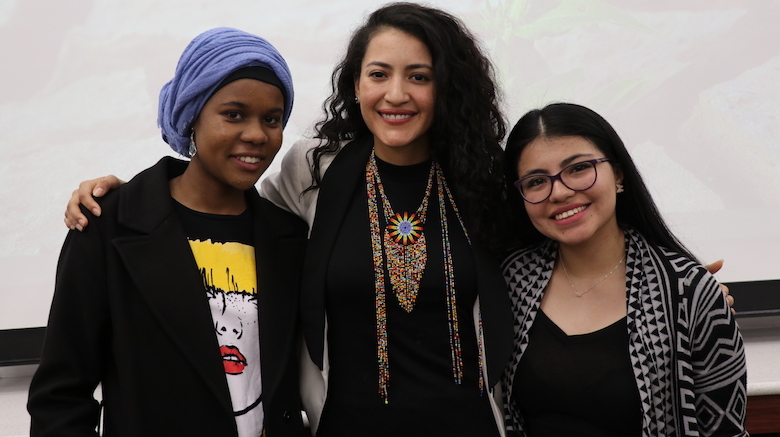 The founder of Solare Creative — a company that helps brands transition into the fourth revolution using creativity, new technology and regenerative practices — encouraged the audience to play a part in protecting the environment during her talk, “Learn How to Surf in the Eye of the Storm: A Talk on Resilience and Sustainability.” 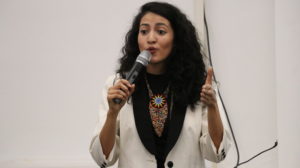 “We hear the word sustainability thrown around,” del Sol said. “We see it on packages, on potato chips, on makeup, on clothes — everyone wants to get into this green movement. And that’s great. We need that change. But sustainability really starts with us. It starts with very small, micro actions.”

She suggested creative ways to live a more sustainable lifestyle, including carpooling and traveling less, eating vegetarian, and using reusable bags and water bottles. It also helps to use less chemicals: for example, del Sol uses a mixture of tree oil and water in her home instead of Windex for cleaning.

“I invite you to think about how, in your individual lives, you can create small changes,” del Sol said. “I made a huge change — I went from using a plastic toothbrush to a bamboo toothbrush … Imagine if this entire school made that one switch?”

She continued: “It’s easy to wait for the government or someone higher than ourselves to make choices for us. But when we take ownership of our own choices, these changes don’t seem so catastrophic. Because at least you’re trying. At least you’re doing something.”

SJC Brooklyn seniors Sally Idris and Maria Guanga, both majoring in biology and minoring in chemistry, invited del Sol in an effort to encourage their peers to help make small changes to protect the environment.

Idris, president of the Go Green Gen Up club, met del Sol during an internship at Solare Creative in the United Nations during her sophomore year and was immediately inspired by her work. She helped del Sol brainstorm ideas and research different brands and the sustainability practices they employ.

Idris was excited to share del Sol’s philosophies with her peers.

“I thought it was good, especially since it’s Earth Day,” she said. “It was very inspirational for today.”

“We wanted to raise awareness about sustainability and motivate students to use other materials,” she said. “We’re a small school, but I think we could do more about recycling sometimes.”

Awarded for Her Work