All in the Family: SJC Basketball Style

Like his dad did in the 1990s, sophomore Ryan McNeely plays basketball for SJC Long Island 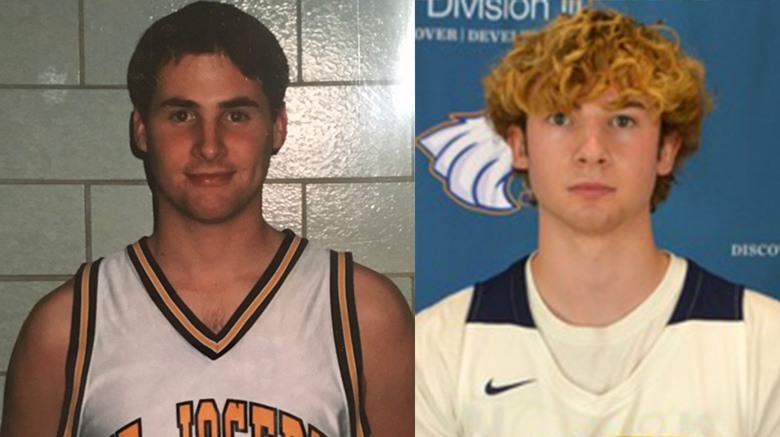 For starters, they both live and breathe basketball. What’s more is that they have attended the same college, played for the same basketball program and have even worn the same No. 30 for the Golden Eagles.

“It feels amazing playing for the same college team my father played for,” said McNeely ’24, who is pursing a degree in Child Study with a Concentration in Speech. “My biggest inspiration is my father.”

The pandemic resulted in a lost freshman season for McNeely, making this season all the more meaningful to them both.

“It has always been a goal of his to play in college,” said McNeely’s dad, who in 1996 earned a degree in Business Management from St. Joseph’s. “I couldn’t wait to watch him play on the college level, so when last year’s season was canceled, I was so disappointed that we had to wait another year to watch him.”

Basketball Runs in Their Blood

Ryan McNeely ’96 playing basketball at SJC Long Island on the old court, which was in O’Connor Hall.

Just like the younger McNeely takes after his dad, so too does the elder McNeely, who like his father Bob became a basketball coach and a school counselor.

“My father is my biggest inspiration,” said McNeely ’96, a counselor at Middle Country Central School District and the boys varsity basketball coach at Mount Sinai High School. “He coached basketball for over 30 years. I used to go to his practices when I was young and shoot on the side baskets. Ryan did the same when he was younger.”

McNeely (the current SJC student) graduated from Mount Sinai and played for his dad there. His younger brother Justin, a senior on Mount Sinai’s basketball team, is considering playing basketball at St. Joseph’s next fall.

Coach Ryan McNeely got his start coaching at Centereach High School, replacing his dad, who stepped down when he felt his son was ready to take over his role.

“Being that my father was a coach, he was able to teach me the right way to play the game,” said McNeely ’96, who started playing basketball in 5th grade and who served as captain of the Golden Eagles his junior and senior years. “He always would push me to get better. As a coach, he had access to all the camps and clinics that could help me improve.”

McNeely ’24, a shooting guard playing off the bench so far this season, recognizes where his own interests stem from, as well.

“I grew up in a basketball household. As a kid, I would go to all of the games and practices that my dad coached,” said McNeely ’24, who began playing the sport when he was 4. “I’ve followed in his footsteps of being a player and coach.”

McNeely ’24, along with his teammate and senior child study major Matt Hirdt, started Long Island Sound Basketball, a travel program where they coach kids from grades 6-11.

The Best Part of Basketball 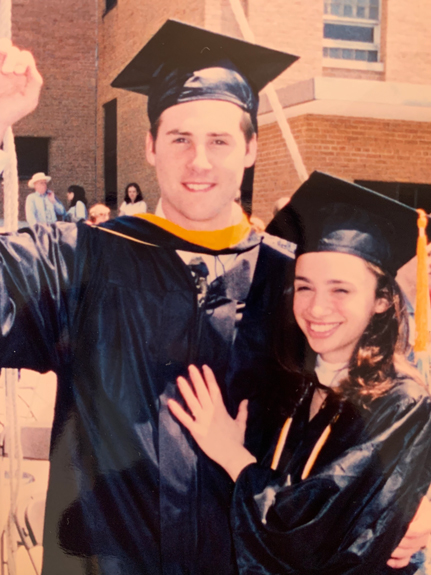 Ryan and Lori McNeely on their graduation day in 1996.

The elder McNeely fondly recalls his time at St. Joseph’s — thanks in large part to his time on the basketball court.

“My favorite memory was February of my senior year, when I scored my 1,000th career point at a home game in front of my family and friends,” said McNeely ’96, a former shooting guard and small forward whose 1,083 career points is the program’s 10th highest all-time.

He also credits his time as a Golden Eagle to meeting his wife Lori, a fellow Class of 1996 graduate who earned a Political Science degree and is now an attorney.

“We met during our freshman year, when I was on the basketball team and she was a cheerleader,” McNeely ’96 said. “We were engaged in December of our senior year.”

McNeely ’96 is eighth on the men’s basketball program’s all-time rebounds list with 464 , and he holds the record for most free throws made in a game without a miss — 15 — in one game. He played his first two and a half seasons in O’Connor Hall, where the gym used to be (where the Student Hospitality Lounge and the McGann Conference Center currently sit), and then a year and a half in the Academy of St. Joseph in Brentwood, while the Danzi Athletic Center* was being built.

“I have heard stories from my dad about the program and have watched old film of my dad playing on the team,” McNeely ’24 said. “After seeing film from the old gym that used to be here, it feels great to have a very nice facility to play in.”

Part of a Team 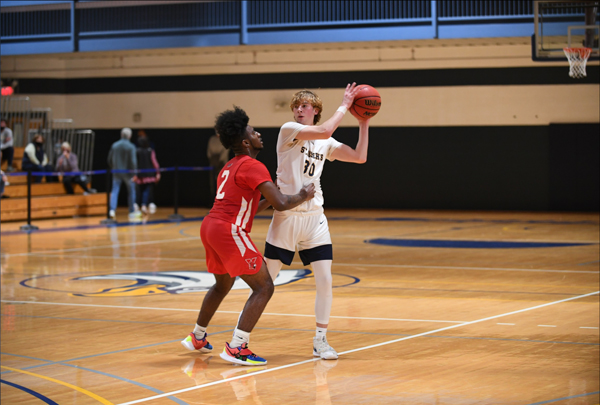 Although McNeely ’24 is only in his third semester at the College and in his first semester competing as a Golden Eagle, he already knows how important the team is to him.

“My favorite experience from my time at the College so far has been the bond formed with my teammates,” said McNeely ’24, who played 20 minutes in SJC Long Island’s 61-54 win over St. Elizabeth on Nov. 17. “We have a great group of guys on the team, so we all get along and have fun in the process.

“Playing here will always be a nice connection to have with my father,” he added.

McNeely ’96 looks forward to attending as many of his son’s games as he can — alongside his wife, his father and his younger son.

*Building the Danzi Athletic Center wouldn’t have been possible without the support of the College’s many donors. And on Giving Tuesday, donors have the opportunity to support the Golden Eagles men’s basketball team again — by helping raise funds for an overnight tournament and for purchasing Synergy, a film software that will help the team remain competitive.