‘Be the Match’ Club Born From a Desire to Help Others 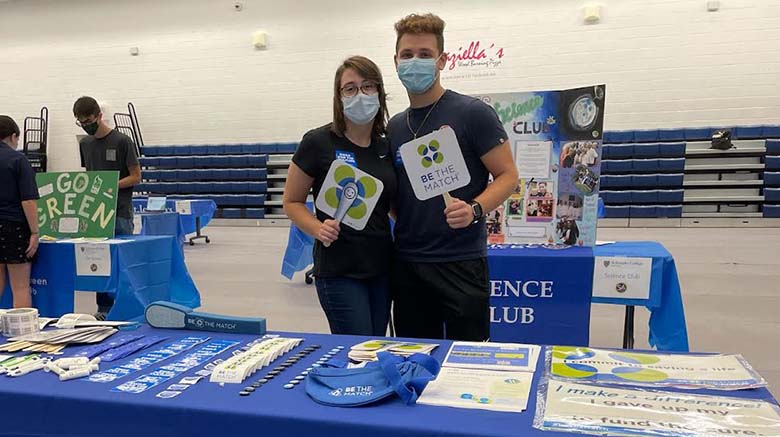 During the COVID-19 pandemic, SJC Brooklyn students Sophia George and Christopher Saad realized the importance of making sacrifices to help those around them.

They sacrificed in-person learning when the College temporarily switched to remote learning to abide by the state’s social distancing mandates to lessen the spread of the COVID-19 virus. They saw the sacrifices nurses and other essential workers made to protect the community. And George saw another incredible sacrifice first-hand when her aunt, who had severe aplastic anemia — a rare condition where the body doesn’t produce enough new blood cells — received a life-saving bone marrow transplant from a stranger.

George and Saad, both junior biology majors, were inspired by these sacrifices and wanted to join others in serving their community. This inspiration led them to found a new club on campus: Be the Match.

Be the Match is a student chapter of a national program of the same name, managed by the National Marrow Donor Program — the largest and most diverse bone marrow registry in the world.

“Unfortunately, people get diagnosed with blood diseases like leukemia and lymphoma everyday,” George said. “By becoming members of the Be The Match bone marrow donor registry, we can provide hope for a cure. Be the Match is more than a club, and it is more than the non-profit national organization it represents. Be the Match is an opportunity and a future.”

Starting a New Club on Campus

George and Saad agreed that one of the best things about the Be the Match club is the way it allows students to serve their community without a large time commitment. Students in the club join the bone marrow registry by using an at-home swab kit and mailing it in. Then, the registry contacts the donor to donate when it detects a match for a person in need of a bone marrow transplant.

Click here for more information, or to join the registry.

George and Saad are registered donors, but have yet to be matched with a patient. Individuals who join the registry may match with a patient immediately, or it can take a decade, or not happen at all — it depends on patients matching to a donor on the list.

Earlier this year, the club hosted a campaign during Black History Month that focused on the disparities that exist for patients from African-American backgrounds. Patients are most likely to match with donors of the same ethnic background, according to the National Bone Marrow program. By campaigning for a diverse donor pool of registry members, George and Saad hope to change that statistic.

“What we do know is that chances of finding a match varies between ethnic backgrounds,” George explained, “which is why it is important for everyone to join the registry.”