Becoming a Business Owner: Catching Up with Greg Melita ’06 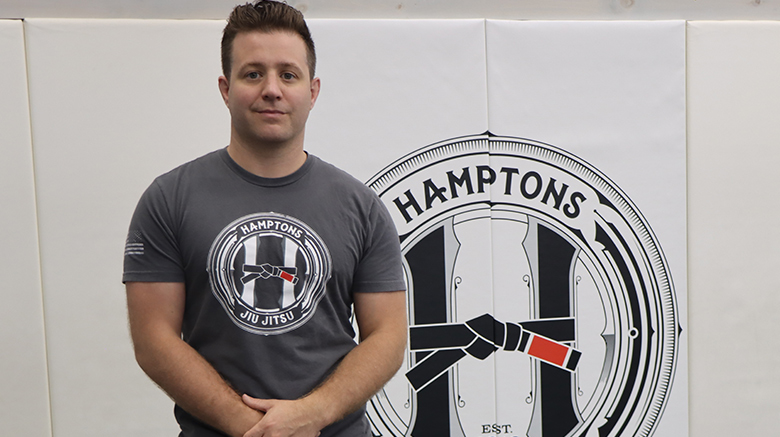 While many small business owners struggled to stay afloat during the pandemic, Greg Melita found his not only survived, but thrived.

Hamptons Jiu Jitsu, opened by the St. Joseph’s alumnus in 2017, moved to its third location in March 2022, gaining better amenities — and about 20 more floor mats — in the process.

“Everyone’s calling it HJJ 3.0,” said Melita, who graduated from the Long Island Campus in 2006 with a B.S. in Computer Information Technology and a Minor in Business Administration.

“Not knowing post-COVID if things were going to come back, it was definitely a risk,” the Islip resident said of the move. “But all in all, this was worth it, 100 percent. Having everyone we trained here believe in us and support us, it really feels good. It shows that when you put in the hard work and you believe in what you’re doing, you’ll figure it out.”

Hamptons Jiu Jitsu’s new home is located in the Southampton Gym, just a few doors down from the Hampton Jitney East End drop-off for passengers from Manhattan. Since its start, more than 2,000 people have come through the doors of Hamptons Jiu Jitsu to train.

In between offering Zoom classes during the pandemic, Melita, 37, started a nonprofit organization called Hamptons Youth Camps. The endeavor pairs together low-income families with local recreational companies affected by COVID-19.

“Here at Hamptons Jiu Jitsu, where we establish so many relationships with local businesses, we were talking all the time about how damaged we were by the pandemic,” Melita explained. “The surf schools, the tennis schools, the yoga instructors, the paddle boarding coaches, the fishing charters — all these people were training with us and talking about how much this hurts.”

While there are summer camps in the Hamptons where kids participate in general sports for a fee, Melita wanted to provide high-end experiences for kids, through a mutually beneficial partnership.

“It’s been amazing so far,” he said. “We’re actually working with the Shinnecock Reservation now; they come once a week for Jiu Jitsu classes. We’re starting up our surf lessons, as well. We have a couple more board members now, and we’re in talks with other local charities. And it all started from a tough spot in COVID.

“Kids experiencing even one or two of these activities, whether they stay with it or not, can change their lives,” Melita added.

Hamptons Youth Camps started in the summer of 2020 and has since grown to include more activities, with the donations allowing for a larger group of kids to enjoy them.

Since opening his business, Melita has seen such celebrities come through to practice at Hamptons Jiu Jitsu as former UFC Championship featherweight and lightweight double-champion Conor McGregor, the late chef Anthony Bourdain and most recently, middleweight UFC fighter Nick Diaz.

They also had a local reality show film there, the episode of which will appear on streaming services this fall.

“It’s been really exciting here to have those big celebrities or TV shows reaching out to us,” Melita said. “It kind of shows that we’re out there, and the brand is established. That’s one way as a business owner that you can say, ‘Okay, things are taking shape and you’re known.'”

Melita advises others thinking about starting their own business to not let their doubts hold them back.

As far as what led to Hamptons Jiu Jitsu’s success, Melita credits his adaptability and open mindset.

“That’s a huge part of it,” he said. “If you’re just going to stay with what you think you should be doing without taking in what’s happening actively and adjusting from there, that’s not going to be good for anyone’s business.

“Establishing and having a good mindset is the biggest thing that helped us,” Melita continued. “It’s one of the best traits you can have as a business owner.”