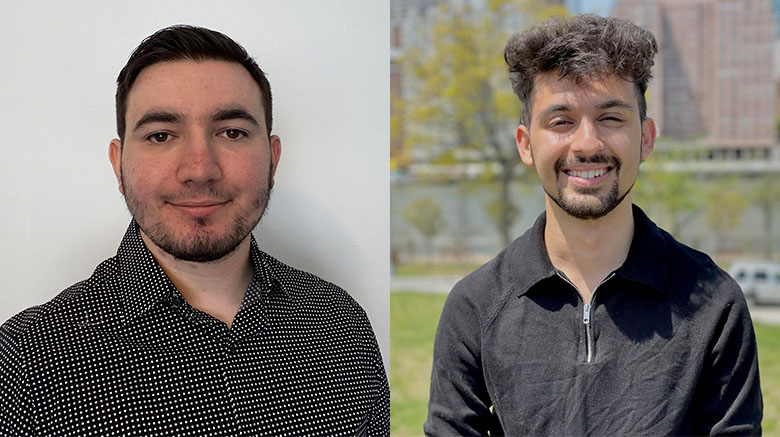 Since the program – designed for local undergraduate students interested in studying computer science or related fields in graduate school – was established in 2014, St. Joseph’s has seen nine students accepted. Before Pokharel and Stewart, SJNY’s most recent participant was Sambhav Shrestha ’22 in 2021.

We recently caught up with the pair to discuss the program, the main takeaways and how the experience may affect future plans.

A total of 12 students took part in the 2022 Microsoft Research Data Science Summer School from May 31 to June 24. The application process required students to provide resumes, recommendations, statements of purpose and other material.

“The process was similar to applying to a graduate school program,” Stewart said. “(The experience) will be helpful for me in the future when I apply for master’s programs.”

Both students credit faculty members in St. Joseph’s Department of Mathematics and Computer Science for making them aware of the program and for helping them during the application process.

“(SJNY professors) David Seppala-Holtzman, Ph.D., Elizabeth Zollinger, Ph.D., and Salim Arfaoui, M.S., wrote recommendation letters for me,” Pokharel said. “They are always there to push me if any opportunity arises, and I appreciate their mentorship and guidance.”

“We have great professors at St. Joseph’s that care for their students,” added Stewart. “Going through the computer science program is like having a little team to help develop your skills.

“My professors were crucial in helping me get a spot in the program directly with recommendations from Professor Arafoui and Dr. Zollinger.”

Sessions ran Monday through Friday from 10 a.m.-5 p.m. Initially, the coursework aimed to develop technical skills, and later it was geared toward research practice.

“The first half of the program was all about learning the R programming language and bash scripting in Linux,” Stewart said. “It helped us work on our main project in the second half.”

“I learned machine-learning algorithms, model complexities, and cross-validation for assessment and fitting,” Pokharel said. “But more importantly, I got better at doing research.”

“Learning the bash scripting was fun because I have taken those skills I learned and have used them for automating some basic tasks on my computer,” Stewart added.

The educators were all Microsoft employees, including Jake Hofman, a senior principal researcher and the Summer School’s lead instructor.

“Having (Hofman) as the instructor was a game changer, since he also has a teaching background as an adjunct assistant professor at Columbia University,” Stewart said.

Stewart added that “one nice aspect (of the program) was that all of the researchers were in academia at some point. They all had their Ph.D.s., and that was helpful from a learning perspective.”

The program proved to be an invaluable experience for both students, who developed new skills, made meaningful connections and got a taste of what working in the data science field is like.

Pokharel and Stewart have long dreamed of working in the field, and their time in the summer program further confirmed their desires.

“I always wanted to be a data scientist,” Pokharel said. “I’m an international student from Nepal, and I decided to pursue my academic career in the U.S. to have better career opportunities.

“Now I’m working with renowned urologists in Indonesia on a research project where I am contributing to the data science department,” he added.

When asked if his experience in the program changed his future plans, Stewart said “I wouldn’t say the program necessarily affected my career goals, but I do believe that it affirmed my desire to become a software engineer.”

He has a job offer he intends to accept after graduation this spring but plans to attend graduate school in the fall.

“I would like to attend graduate school to gain more experience in the human-computer interaction space,” Stewart said. “I want to use my skills as a software engineer to work on accessibility issues in the technology field.”