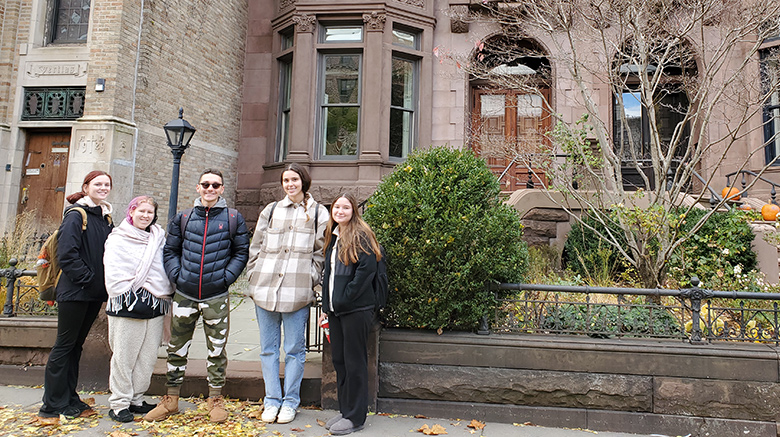 Gentrification – a process by which an influx of wealth alters the makeup of a low-income neighborhood – is an untenable reality in Brooklyn.

The location of the Brooklyn Campus, in the picturesque neighborhood of Clinton Hill, recently provided students the opportunity to see firsthand the effects gentrification has had on the area.

So, having recently completed gentrification field reports on a neighborhood of their choosing, the students took to the pavement to further study the stages of gentrification.

Sights on the Nov. 28 trip included the Charles Millard Pratt Mansion, the Clinton Hill Co-ops and the carriage homes on Waverly Avenue.

“The first part of the field trip included a discussion of the economic and political changes in the late 1800s that led to the influx of wealthy families to the neighborhood,” said Dr. Landriscina. 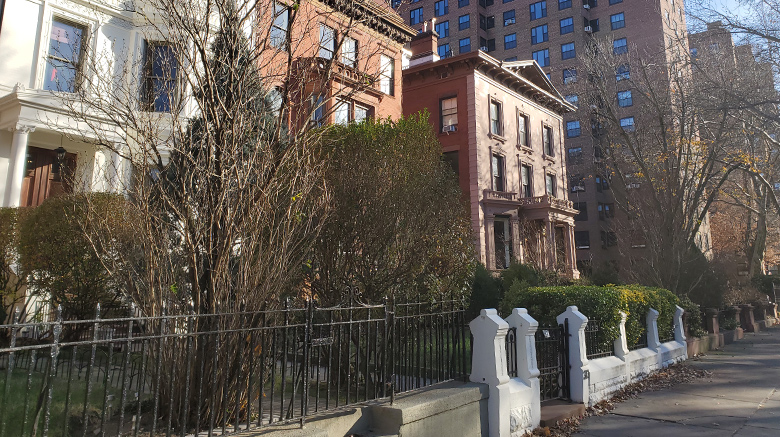 “Clinton Avenue was once part of Brooklyn’s ‘Millionaire’s Row,’ and a period of property development produced the architectural features of the neighborhood that have attracted multiple waves of gentrifiers starting in the 1980s.”

Alexandra Malvasio ’23, one of the students in the class, gave her definition of gentrification.

“Gentrification occurs when lower-income communities are taken over by those with greater income, raising real estate prices and rents, driving many prior residents out,” she said.

Look no further than the Clinton Hill Co-ops, built for members of the working class in the 1940s. The demographics of the residents changed after a period of “white flight” in the 1950s and 1960s, and when the rental units were converted in the 1980s, many of the working-class inhabitants could not afford to purchase their homes.

A steady flow of affluent buyers and renters arrived in Clinton Hill in the ensuing decades, drawn by the desirable architectural features of the buildings and the influx of trendy cafes and restaurants.

As real estate values skyrocketed, lower-income residents were pushed out. One building, 280 Washington Ave., was built for a co-founder of the pharmaceutical company Pfizer in 1887 and sold for $9.2 million in 2020.

Dr. Landriscina – who found “The Clinton Hill Historic District Designation Report, 1981,” Zillow, and various news articles to be useful gentrification resources – felt the trip was constructive in that the “experience helped (the students) understand how neighborhood change can deepen the class divide.”

Malvasio agreed, stating that “overall, (the trip was) truly an eye-opening experience.”


“Touring the neighborhood made me aware of (the historical significance of the) buildings that have been around for years, especially the ones next to the University that I passed almost every day for four years,” Malvasio added.