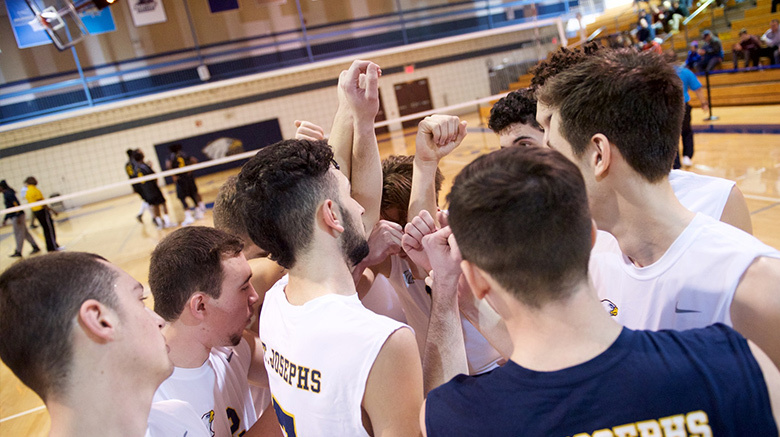 William Kropp was enjoying retirement. After a 34-year career as a teacher and volleyball coach at Sachem School District, Kropp wasn’t sure what the future held, but was eager to savor it. That’s when a familiar temptation came calling.

“I heard from some high school coaches in Suffolk County that St. Joseph’s was thinking about starting a men’s volleyball program,” Kropp said. “They thought it would be the perfect fit for a guy who now had some extra time on his hands.”

Kropp liked the idea of creating something on Long Island from scratch, with a fresh group of skilled Long Island players. And so, in late 2015, he signed on as head coach of the SJC Golden Eagles men’s volleyball team, arriving with an impressive resume — a Long Island high school championship (2013), five Suffolk County championships (1992, 1994, 1995, 2000, 2013) and six Suffolk Coach of the Year honors, all with Sachem High School East.

We would like to make St. Joseph’s a national powerhouse and show we may be a small college, but on the court we can compete with anyone.”

After SJC’s inaugural men’s volleyball season concluded in spring 2017, Kropp added another distinction: Skyline Conference Coach of the Year. He led an SJC squad, featuring eight freshmen, to an impressive 19-11 record, good enough for the fourth seed in the Skyline Conference Championship.

One of those players, Kyle Biggers, first heard about the program during his senior year at Sachem East High School when Coach Kropp texted him.

“Right when he mentioned the program, that’s when I knew I wanted to be a part of it,” Biggers said. “Most people don’t expect much from a first-year program, but what we did this season was pretty amazing and surpassed any expectation that I had.”

Biggers led the conference — and nation — in hitting percentage (.469) and collected 232 kills and 58 blocks on the year. The middle blocker was the only player on the team to appear in all 106 sets this season and finished second in total points (280.5).

The impressive numbers were more than enough to secure him Skyline Conference Rookie of the Year honors. 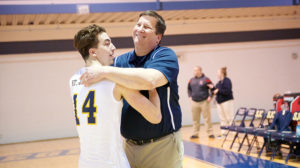 Biggers credits this to his team’s focus and discipline. “Where we lack in height, we gain in hustle,” he said. “I’m roughly six-foot-two and one of, if not the tallest on the team. We have played teams where the whole front row was six-four and up. We handled this obstacle with just really focused play. We would sweat the details and just focus on defense, not letting balls hit the floor.”

Additionally, Biggers landed on the All-Conference First-Team and fellow freshman Paul Curaro appeared on the Second-Team.

With the 2017 season a wrap, it’s impossible not to anticipate great things from a team whose freshman core will be strengthened with experience and skill over the next three years.

“As each day goes by, I am more amazed on what we were able to accomplish,” Kropp said. “Maybe because I was so involved in the process of preparing the team and competing, I was unable to see what we were doing was very special.

“We would like to make St. Joseph’s a national powerhouse and show we may be a small college, but on the court we can compete with anyone,” he added.