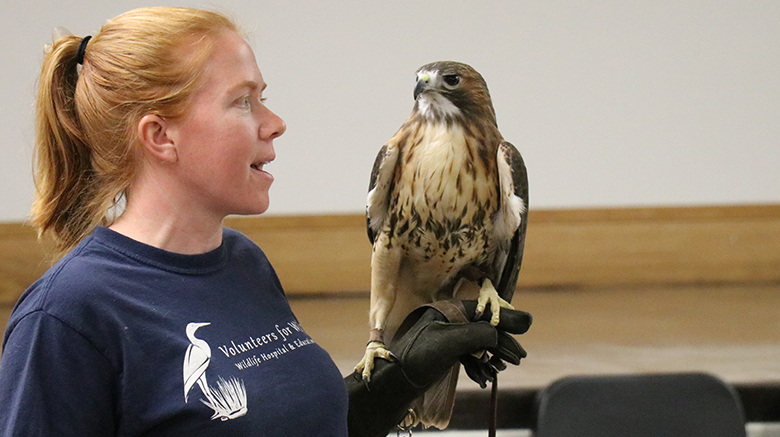 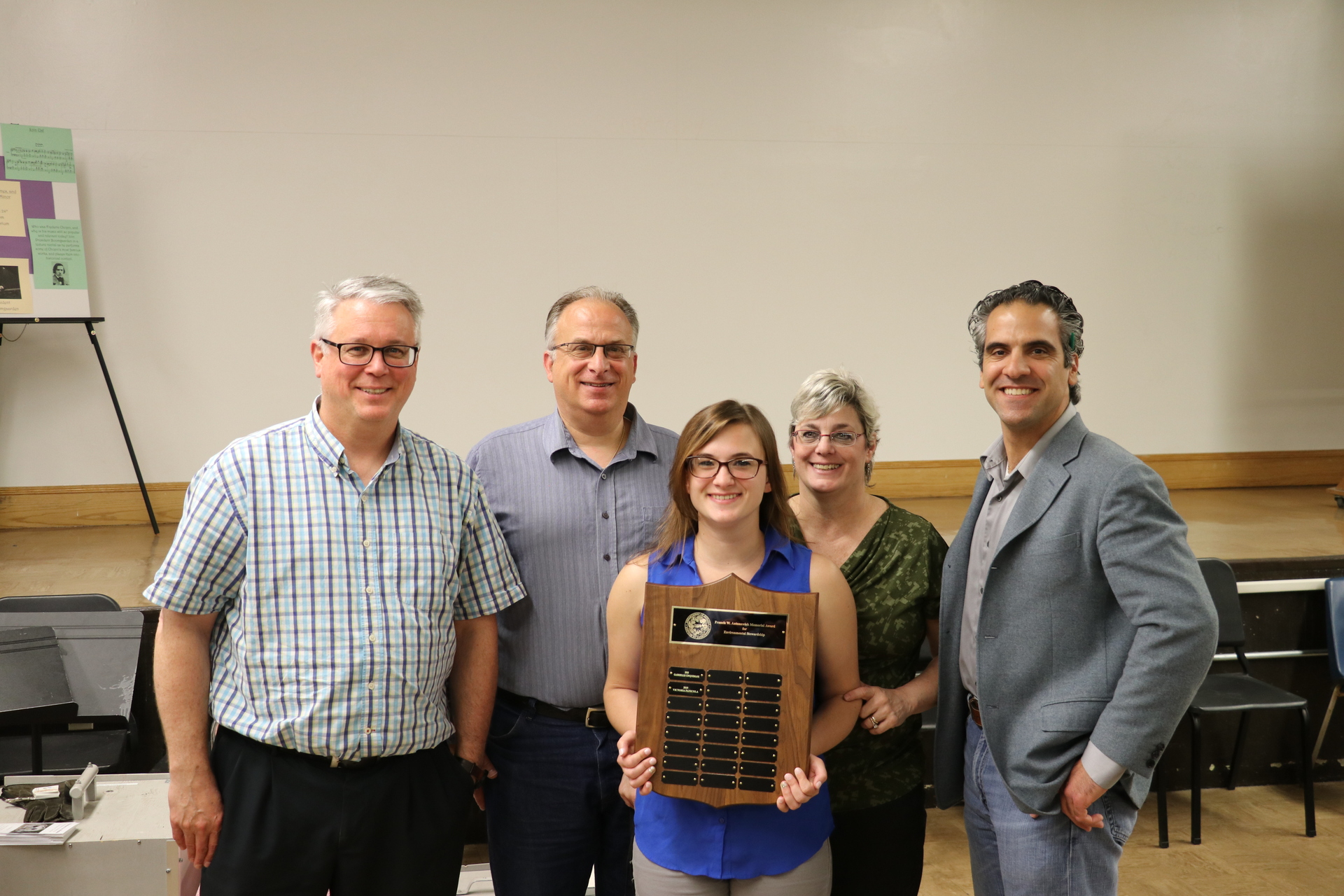 Victoria Panicola with her parents, Dr. Rountos (right), and Dr. Antonawich (father of Francis W. Antonawich and professor and chair of SJC’s Department of Biology, left).

“Last year, the SJC community lost a very special student — one of my first students here at SJC,” Assistant Professor of Biology Konstantine Rountos, Ph.D., said. “Francis W. Antonawich exhibited leadership, environmental stewardship, academic integrity and warm collegiality with his classmates. He was truly a special student who embodied the SJC goals and spirit of volunteerism and action.”

An annual award is given in Antonawich’s name to a biology major who demonstrates the same academic excellence and passion for the environment as he did. This year’s award was presented to senior Victoria Panicola, whose name was added to a memorial plaque that is prominently displayed in the science wing of O’Connor Hall.

Volunteers for Wildlife’s Lauren Schulz Eddings brought four raptors, or birds of prey, for the students, faculty and staff to learn about: a kestrel, a screech owl, a great horned owl and a red-tailed hawk.

“Many of the animals who come into their care have been harmed by human pollution, such as discarded string, balloons, fishing line and nets, as well as pesticides and rodenticides,” said Schulz Eddings, who serves on the Board of Directors of the New York State Wildlife Rehabilitation Council.

Amelia, the kestrel, was brought to the Wildlife Hospital in 2013 after a New York City police officer noticed her walking on the ground surrounded by humans, unfazed by their presence. She was at the age when she should have been flying. While there was nothing physically wrong with her, she did demonstrate signs that indicated she was taken either from her nest or from the wild by a human because she had imprinted on people.

The eastern screech owl, named Duncan, came to the Wildlife Hospital in Locust Valley in 2004. She was part of a project to reintroduce eastern screech owls to Central Park. She was released into the park when she was less than a year old, and she was found on the ground twice. Both times she was brought into rehab, and the first time she was released again. However, they realized she was unable to successfully hunt, so they made the decision not to re-release her.

Marcus, the great horned owl, was found wrapped in a fishing line at a yacht club in Port Washington in 2003. The line caused irreparable tendon and muscle damage to his wing, as well as slight neurological deficits, making him unable to hunt successfully in the wild.

Baby, the red-tailed hawk, came to the Wildlife Hospital in 2001 after sustaining head trauma from a 40-foot fall from his nest as a very young bird. He was brought to the hospital in critical condition. It took several months for them to rehabilitate him, and despite their best efforts to keep him wild and limit his interaction with humans, he became very acclimated with people.

Help reopen the campus nature trail, clean up Patchogue Lake with the Biology Club and prepare the organic garden.

Suffolk County Executive Steve Bellone returns for an update on sustainability issues in the County. Food will be provided.

If you have any questions, please contact the SJC Sustainability Committee at sustainability@sjny.edu.