Home Brooklyn Cheers to the Class of 2022 at the Brooklyn Campus of St. Joseph’s University, New York
BrooklynFeatured

Cheers to the Class of 2022 at the Brooklyn Campus of St. Joseph’s University, New York 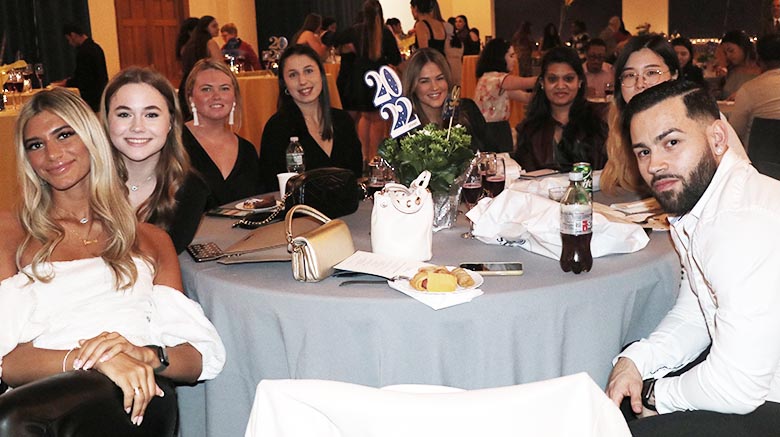 The sounds of joyous chatter and laughter radiated through the Tuohy Hall auditorium Thursday night as the Class of 2022 celebrated their upcoming graduation. 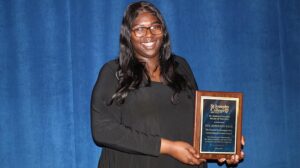 Eva Jefferson-Page ’22 is the recipient of the Donald R. Boomgaarden Leadership in Action Award.

The annual Toast to the Graduates event, hosted by the Office of Student Life at the Brooklyn Campus of St. Joseph’s University, New York, gave the soon-to-be graduates an opportunity to enjoy food as they listened to speeches from Vice President for Student Life and Campus Services Shantey Hill; Provost and Vice President for Academic Affairs Robert Riley, Ph.D.; Board of Trustees Chairman Christopher R. Carroll ’88, Esq.; Valedictorian and Student Speaker Taylor Slakman ’22, and Brooklyn Alumni Board President Margaret Broda ’04.

Carroll said he loves graduation season because it encourages him to reflect on his years at a St. Joseph’s student. He presented the second annual Donald R. Boomgaarden Leadership in Action Award during the event — which was meaningful to him, a former Student Government Association (SGA) president at the University, partially because the recipient of this year’s award, Eva Jefferson-Page ’22, is also the SGA president. She was awarded for her leadership on and off campus. In addition to leading SGA, Jefferson-Page is a three-time orientation leader, a peer mentor, and often volunteers at her church and local food pantries.

The event concluded with a special toast from Hill.

“On behalf of St. Joseph’s College — now University — we wish you continued health, wealth and happiness,” Hill said to the Class of 2022, raising her grape juice-filled champagne flute. “We hope that you continue to carry the values you learned here at St. Joseph’s University, to be a beacon of light in a world that is sometimes unforgiving, and to spread joy and cheer to the many people and places you will soon encounter.”

Check out pictures of the Class of 2022 from the Toast to the Graduates event:

Toast to the Graduates