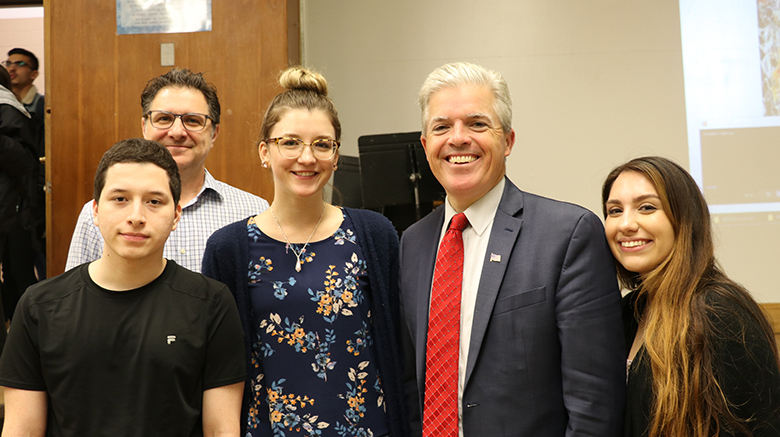 Bellone began his address by discussing a recent event he attended with Gov. Cuomo and entertainer Billy Joel to ban offshore drilling off of the coast of Long Island in favor of wind power, which generates no greenhouse gas emissions.

“Denying climate change is gambling the future of the planet; not just Long Island, not just New York state, the whole planet,” said Bellone. “By backing wind power, we’re being environmentally conscious, while at the same time generating jobs in the maintenance and fabrication of these offshore wind farms – it’s the future.”

The county executive then proceeded to list several important initiatives launched during his tenure in office to reduce the county’s carbon emissions and preserve local water quality. The “green homes” project set ambitious targets for both energy use and efficiency, while grant programs have been made available to homeowners to retrofit their dwellings to increase the efficiency of previously existing housing.

Bellone also addressed the vital issue of water quality and the challenges the county faces in remediating the impact of decades of pollution. He described how the fishing economy of the Great South Bay, once the foundation of 10,000 jobs, was destroyed due to the impact of untreated water. New programs, in partnership with private capital, offer homeowners long-term loans at subsidized rates to upgrade their septic systems to prevent wastewater from entering the water table.

“We live on an island – water is everything here,” Bellone said. “Since I’ve been county executive, we’ve had three ‘once in a century storms’ – either I am really unlucky or something is going on. By reducing greenhouse gases and limiting pollution in the water, we’re both protecting our natural ecosystem and doing our part to preserve our island for generations to come.”