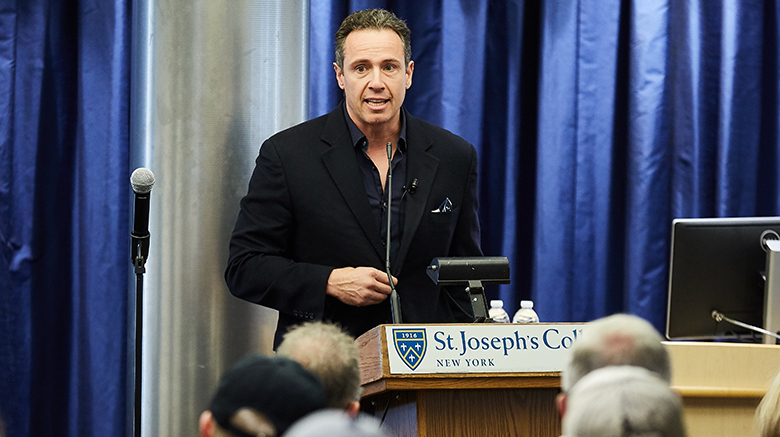 “With the Trump administration, the need for journalism is more important now than at any other time in my career,” Cuomo told the students, faculty and staff that filled the McGann Conference Center. “This is the time that college students studying journalism will be talking about for the next 20 years. They’ll be talking about what happened with journalism at this time; some of it is amazing, some of it is not. There are problems that are now being exposed, and we’re going to have to deal with it.

“The job has changed, but I think it’s in a way that makes it much more important,” he added.

Some of the changes journalism has faced is the advancements in technology, including the role of social media as a way to instantly share news updates.

“The job of a journalist has always been multifaceted,” Cuomo, 48, said. “But now we’re using social media, and we’re learning how different social media have different tolerances. For example, you don’t want to hear 400 words from me on Instagram. You want pictures. Twitter, for me, is open-hand combat.”

He discussed how, while social platforms make it easier for people to find and read news stories and updates, it doesn’t mean that these sources are all reliable or accurate.

Cuomo explained one of the reasons he left ABC News was his desire to be on air every day and to be a part of relevant dialogue.

“There was a real balancing act in network morning television about what people want at 7 o’clock in the morning when they’re getting their kids ready and themselves ready,” Cuomo said. “If a show’s going to do well, it has to respect that balance.”

Now, as an anchor on CNN every night at 9 p.m., Cuomo discusses topics considered too heavy for morning news.

“I’m all about the most neglected of the W’s: Why. Why has become very important to your analogy of being on the side. And at 9 at night, everything’s already been chewed on. That’s why I focus on the why. It’s about what matters and how you test everything you’ve already read about on your phone that day.”

In Cuomo’s opinion, one of the best television journalists is Anderson Cooper because he tells you what you need to know, but more importantly, because he expresses to you the componentry of your interdependence and interconnectedness to what’s happening.

“One of the highest forms of journalism is giving you what you need to process intellectually, but feeding the emotional component that breeds our understanding. That’s why (Anderson Cooper) is the best.”