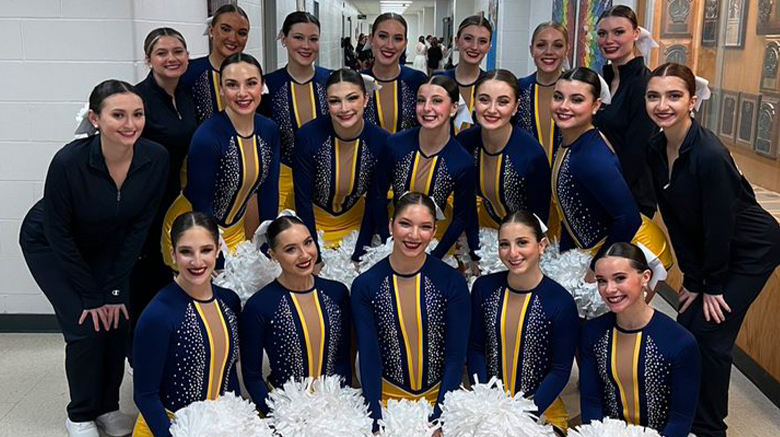 “Nationals was canceled last year, so this year is very important to the team,” said Gabby Castilletti, one of the team’s two coaches. “We have set team goals and individual goals, and are hoping to accomplish them while enjoying our time together at Nationals.

The team will compete in two categories, Open Jazz and Open Pom, on Jan. 14. At Nationals past, the Golden Eagles have finished as high as 14th in Open Jazz, but they’ll compete in Open Pom for the first time this year.

Should the team qualify for finals in either category, they would compete again on Jan. 15.

The Culmination of a Long Season

Preparation for Nationals began in June when the team reconvened. Since then, they have not only practiced, but also fundraised, attended community events and polished their routines with performances at home soccer and basketball games.

On Jan. 7, the team placed first for jazz and second for pom at the Long Island Dance Team Association’s championships – the final tune-up before Nationals.

The team is proud of what they’ve accomplished up to this point, but Nationals is the most important date on the season’s calendar.

“At Nationals, there’s a certain feeling you get,” Castilletti said. “You’re surrounded by some of the most talented and driven dancers from across the country who have worked just as hard as we have.