Each Thanksgiving season, the St. Joseph’s College community uses breads, along with song and prayer, to reflect on the needs of the world. The script of the program is updated each year to reflect current global issues. 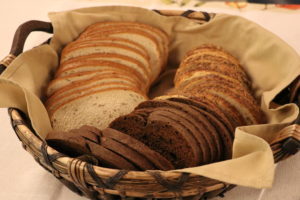 The SJC Brooklyn community uses various breads to reflect on the needs of the world during Thanksgiving time.

The popular “Breads of the World” event had extra special meaning this year, as Campus Ministry Director Sister Susan Wilcox— who helped bring “Breads of the World” from SJC Long Island to SJC Brooklyn some 15 years ago —prepares for her next career. After the fall semester, S. Susan will start work as the coordinator of peace, justice and integrity for the Congregation of the Sisters of St. Joseph’s in Brentwood.

S. Susan said “Breads of the World” is among her favorite events and it fills her heart to see so many students eager to participate each year.

“It has a certain holiday spirit to it,” she said. “It’s become a community building event … At certain times I would ask students, ‘Do you want to do something different?’ They would look at me shocked and say, ‘Not do Breads of the World?'”

“It started to become unthinkable that we would not do ‘Breads of the World’ the week of Thanksgiving break.”

At the end of the ceremony, students sit at a table and enjoy breads — bought largely from restaurants on Myrtle Avenue — representing cultures across the world.

During her time at St. Joe’s, S. Susan saw campus life evolve into the vibrant community it is today.

“It was much less diverse student population than what we have now,” she said. “Most of our students came from local Catholic high schools.”

S. Susan quickly noted that she started at St. Joe’s shortly after the creation of the Academic Center for English Studies (ACES), and saw its immense growth first-hand. Her office at the time was inside St. Angela’s Hall, across from the ACES office, so she interacted with the College’s international students and learned about their specific needs.

S. Susan said she will always cherish her years working for the College.

“My time here at St. Joseph’s really was a time of a lot of growth for me because that’s the kind of place St. Joseph’s is,” she said. “It’s a place where people grow. It’s really an environment for everyone. I really appreciate that about my time here.”