Discovering Where Dreams are Made of at the Brooklyn Campus

For Natalie Fanthorpe ’24, enrolling at St. Joseph’s University, New York’s Brooklyn Campus was the fulfillment of a promise she made herself four years prior.

“When I was in eighth grade, I came to New York City and fell in love with it – the yummy food, the sights, the plays and knowing that my Italian ancestors came through Ellis Island and started their lives here was so surreal,” said Fanthorpe Santa Cruz, California.

“The day we left New York, I was so sad to be leaving. It was raining and I remember looking out of the bus window while ‘Empire State of Mind’ played in my headphones, whispering to myself ‘I’ll be back,’” added the Child Study major.

Fanthorpe made good on the promise when it became time to search for colleges four years later and it didn’t take her long to find the place that she wanted to make her home for the next four years.

“St. Joseph’s was the first school we visited – my mom and I both loved how small and cozy the school felt,” she said. “We were led on a one-on-one tour, rather than a large group tour. I didn’t just feel like a number on a tour list, I felt like an individual the school wanted to welcome into the community.”

Becoming part of the St. Joseph’s community and moving to New York City also helped Fanthorpe broaden her own horizons.

“The town I’m from is a small beach town. I knew that I wanted to live in Brooklyn and expose myself to a completely different way of life, a completely different culture,” she said. “In Santa Cruz, you might get funny looks if you wear an outlandish outfit or if you’re louder than the people around you. In New York, though, I feel completely free to be myself.” 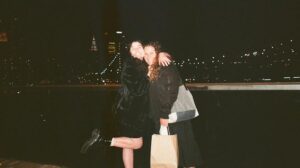 After Fanthorpe arrived in New York City in late summer 2020 — and after the quarantine period had passed — Fanthorpe threw herself into city life.

“Once I was out of quarantine, I had a blast. I loved going to vegan cafés, going to museums, walking around the city, and watching sunsets in the promenade of Brooklyn Heights,” she said. “I also got involved in the community. Through my Buddhism class, I became involved with the organization Seeds in the Middle, which works to provide children and families with access to fresh produce, as well as baby food, diapers, N95 masks and other necessities.”

“I have always loved working with children. When I was a little girl, I would set up my stuffed animals in a semi-circle and read them picture books as if I were their teacher,” Fanthorpe said.

Although enrolled in the rigorous child study program, she has been able to explore other courses and activities to round out her university experience.

“One of my favorite courses at St. Joseph’s was Buddhism with Professor Petriano,” Fanthorpe said. “I learned so much throughout the class and we meditated as a class every week, which was always nice. The class provided me with a lot of inspiration and ideas on how to have a happier life.”

To Fanthorpe, the most unique attribute of her time at St. Joseph’s is the feeling of security and support she experiences.

“The close knit community of St. Joseph’s is very unique — walking through the campus I know that there are friends, peers, professors, and staff that care for me. I know that my Child Study professors will always be there to help me become a teacher that students can look up to, rely on, and trust.”

The video above was produced by Amanda Bernocco.