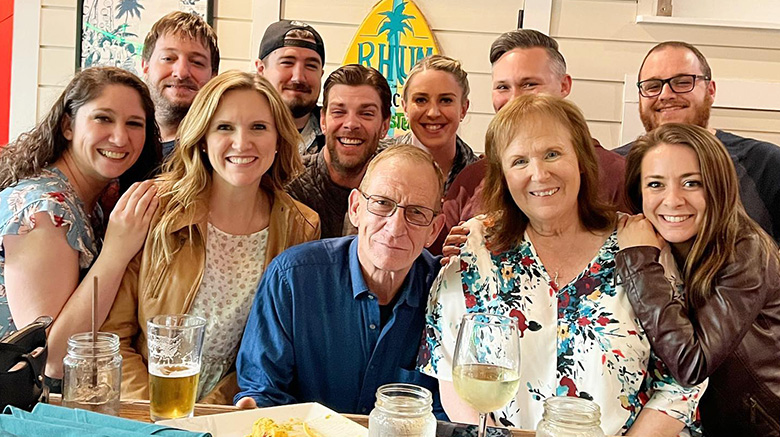 They didn’t expect to hit that goal in less than 10 months.

“When we sat down and set goals, I had no doubt in my mind that we would easily endow this scholarship within the five years we were allowed,” said Alan Zollo ’10, one of the founding members of the scholarship and who gave the donation that allowed the scholarship to hit its goal.

“I was fairly sure we’d do it in under a year and a half,” he continued. “But to reach this goal in under 10 months is mind-blowing!”

DJ Schiulaz graduated from the St. Joseph’s University’s Long Island Campus in 2010, earning a degree in history. As a student, he was an involved member of the University community, serving as an active brother of Delta Psi Omega (now the Alpha Phi Delta National Fraternity), a Campus Activities Board (CAB) executive, a Student Government Association (SGA) executive and an Orientation Team Leader.

He passed away Dec. 3, 2019, from a rare genetic disorder called Duchenne muscular dystrophy, or DMD. A year and a half later, 11 of his friends, brothers and classmates from St. Joseph’s decided to establish a scholarship to honor his life, service and friendship.

“It just goes to show that DJ has had a huge impact on the (St. Joseph’s) community,” said Zollo, a fellow brother of Delta Psi Omega. “We are very excited to reach this goal, and the committee is now eyeing future goals to continue to honor DJ as he should be.”

Supporters of the scholarship include DJ’s friends, St. Joseph’s alumni, DJ’s family and outside organizations like the Lynbrook High School Key Club.

“I’m so proud of the DJ Schiulaz ’10 Memorial Scholarship Committee,” said Lisa Galasso ’08, M.S./MBA ’13, associate director of alumni engagement at St. Joseph’s and staff liaison for the committee. “They had five years to endow a scholarship in memory of an amazing friend and alumnus of the University, and they crushed their goal in less than 10 months!”

Donations are still being accepted so that more scholarship money can go to the recipient.