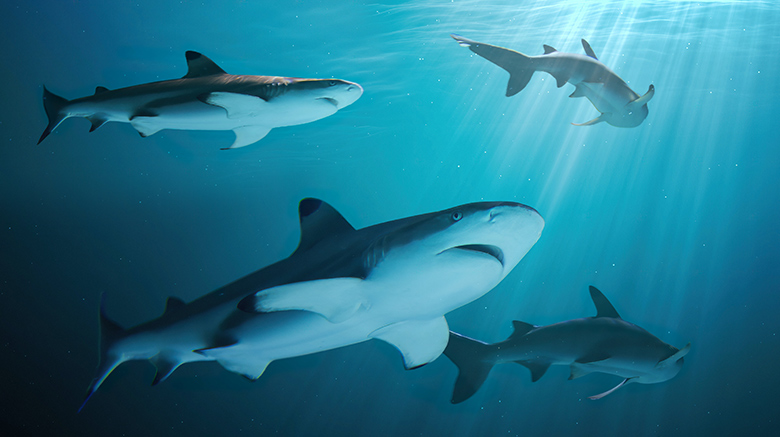 With six reported run-ins with sharks so far this summer in the waters off Long Island, swimmers, surfers and beach-goers alike have been left wondering what’s causing this uptick in attacks.

We sat down with shark researcher and high school biology teacher Matthew Berkhout ’09, who also works as an adjunct biology professor at St. Joseph’s University, New York, to get some answers to our shark-filled questions.

Berkhout, who earned a B.S. in Biology with a Concentration in Adolescence Education from St. Joseph’s Long Island Campus in 2009, is a key member of a group of scientists conducting a years-long shark research project in the Atlantic Ocean, between Cape May, New Jersey and Montauk, New York. The research team includes scientists from the South Fork Natural History Museum, SOFO, who’s sponsoring the research).

OnCampus: There was only one reported shark bite in the waters off Long Island last summer, but there have been six attacks so far this summer. What do you think is the leading cause for this drastic uptick in attacks?

Berkhout: Although these events in the news are obviously negative interactions, the fact that we’re seeing these large numbers of sharks is actually a success story. We’ve been protecting sharks and their food for decades now, and it is working. It seems that most of these people interacting with sharks are swimming or surfing in schools of Atlantic Menhaden (bunker), a primary food source for them.

Greater numbers of sharks are feeding close to shore, and the bathers get in the way. It is important that people know not to swim near schools of fish or at dusk and dawn, when sharks feed the most. With more animals in shallow water and more bathers every year, we should not be terribly surprised that there are some injuries in the water. It’s also important to note that not all “attacks” are bites.

OC: Do you think climate change could be related, and if so, how?

Berkhout: There is no evidence to suggest that climate change is playing a role here. It seems much more likely that protections for bunker and several species of sharks are allowing the populations of these apex predators to rebound toward historically appropriate numbers.

OC: Is there any sign that there’s a shortage in their normal prey?

Berkhout: Thanks to the protective regulations put in place, there is no shortage of prey. It’s actually much more likely that the abundance of prey is bringing these animals closer to shore, where humans spend their time in the water.

The sharks have no interest in feeding on humans, and in most cases, lack the anatomy to do so — jaw size and structure wouldn’t allow them to break bones and gain a meal from a person. These “attacks” we have been seeing are typically the incidental interactions where people interfere with the normal predatory behavior of sharks. The animals are just trying to eat bunker in a large school and the swimmer is in the way.

OC: Have you noticed an increase in the number of sharks you’re seeing and tagging each year?

Berkhout: Although I can’t comment on unpublished results, the last few years have certainly been very “sharky.”

OC: What kinds of sharks have you tagged this summer, and how many?

Berkhout: We have caught and assessed over 50 sharks this season, most of them dusky sharks. In collaboration with the Peterson Lab of Stony Brook University, the SOFO sharks team has put internal acoustic tags in 25 duskies, 10 sand tiger sharks and a few sandbar sharks, commonly called “brown sharks.” The south shore of Long Island has historically been important habitat for these sharks, so it makes sense that we are catching them here.

OC: A recent article by NPR suggests that the sharks, most likely juvenile sand tigers, are confusing people’s feet for fish. Can you speak to any of this based on your research, such as a large number of juvenile sand tiger sharks, why the bunker fish are close to shore, or why a juvenile shark may be more likely to bite a person?

Berkhout: It sounds like that article accurately explained what is often happening. Growing populations do have a greater proportion of juveniles, thanks to a large number of births. That is very likely the situation with sand tiger, dusky and sandbar sharks. In fact, almost all of the dusky sharks we tagged this season were newborns.

Just like humans, young sharks must learn to differentiate between what is food and what is not — but in the case of sharks, the only way they have to do that is to use their mouths. As they gain experience, they become better at recognizing the difference. That’s one reason why most shark bites involve juvenile animals. They mistake a foot for a fish, for instance.

OC: Why do you consider this increase in the amount of shark activity to be a success story?

Berkhout: A large number of apex predators is a sign of a healthy ecosystem. We have been working hard to restore the populations of sharks, seals, whales and dolphins, and protecting their food source has been a successful strategy. That means if dolphins or whales are feeding on bunker at your beach, there are probably sharks there, too — even if we can’t see them. It is not a good idea to paddle over to get a better look.

In general, it is good practice to stay away from wild animals. More specifically, we need to remember that the ocean is the sharks’ habitat. They are simply trying to feed and survive successfully. The best thing we can do is stay away from them and their food.