Home Brooklyn From Bordeaux to Brooklyn: An Uncommon Path to Skyline Stardom
Brooklyn

From Bordeaux to Brooklyn: An Uncommon Path to Skyline Stardom

Bears star from France says 'Brooklyn, for a French person, is a dream' 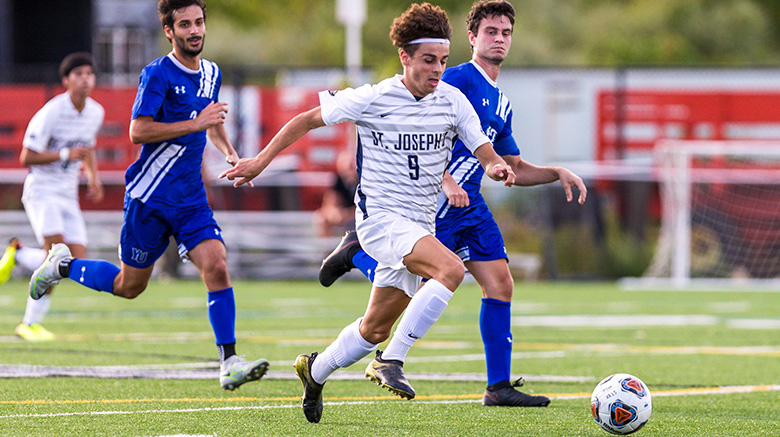 “Brooklyn, for a French person, is a dream,” Naci said.  “And I am currently living that dream.”

The 21-year-old sophomore has been in New York City for barely three months and has accomplished more as a student-athlete than most do in the whole of their four-year collegiate careers.

A talented center forward, Naci — who trained in youth football academies in his native France — led the nation in goals, goals-per-game, and points-per-game at the NCAA Division III level, while powering the Bears to their first non-losing season since 2014-15.

And on Nov. 8, he was named Skyline Conference Men’s Soccer Offensive Player of the Year.

After a stint with the Neosho County Community College men’s soccer team in 2020-21, Naci left Chanute, Kansas, and returned home to Bordeaux, unsure of where his future was headed.

The opportunity to attend St. Joseph’s presented itself when head coach Adam Brunengo saw Naci’s highlight reel on YouTube. Brunegro emailed Naci, and after a lengthy back and forth, recruited the Frenchman.

“I arrived in Brooklyn on Aug. 15 and started training with the team on Aug. 18, so I had to be ready,” Naci said of his first few days in New York. “After two or three weeks of pre-season with the team, I got to know my coaches and my teammates. I scored in our pre-season games and gained enough confidence from my coaches to play as a striker.”

Naci found success early, scoring twice — including the game-winner — in his first game with the Bears, a 4-0 win over Baruch College on Sept. 1.

After being held scoreless in St. Joseph’s second match, Naci tallied a goal in each of the subsequent 13 games, from Sept. 10 to Oct. 22, collecting 17 total during that span.

“I had to concentrate 100% to help my team win and score as many goals as possible,” he said. “I didn’t ask myself too many questions about what I was accomplishing, I was playing to make my family, my friends, and my team proud.

“It wasn’t until the end of the season that I saw that I had achieved something magical,” he added.

Naci scored in all but two games in 2022-23, posted six multi-goal games — including a pair of hat tricks in consecutive contests on Oct. 10 and Oct. 15 — and was named Skyline Conference Offensive Player of the Week twice.

On Oct. 15, he broke the program’s single-season goals record and finished the campaign with 22 goals. Among conference leaders, Naci’s final goal total was double that of second-place Lucas Baredes (11) of Yeshiva University.

The Bears finished seventh in the Skyline standings with a 4-4-3 conference record (6-6-4 overall) and narrowly missed out on a playoff berth.

But Naci’s historic season has the program feeling good about its future prospects. Naci, of course, attributes much of his success to those around him.

“The key to this success has been hard work,” a modest Naci remarked. “But without my teammates and coaches, I would not have accomplished what I had. It’s not just an individual award, but a collective honor.”

Alumni Recognized for Potential as a Future Senior Leader

Giving to Those in Need Through Thanksgiving Food...