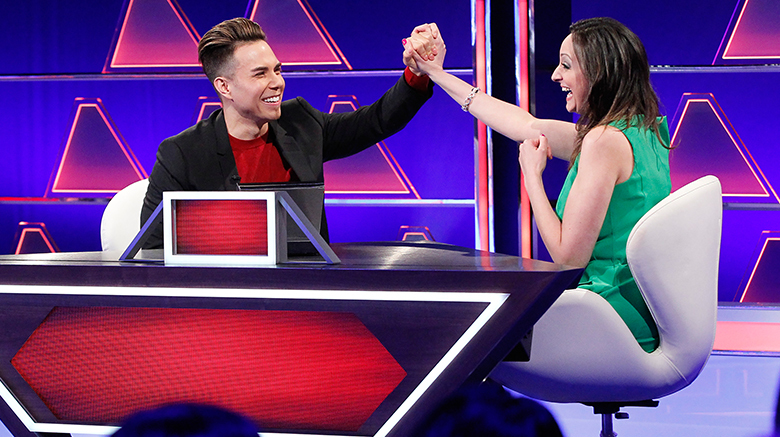 A finished basement. A Vacation. Her son’s college fund.

The moment SJC Long Island staffer Andrea Gallo Volk realized she had won $50,000 on ABC’s “The $100,000 Pyramid,” her mind raced with thoughts of how she’d spend it.

Volk, who graduated from SJC Long Island in 2004 with a bachelor’s degree in speech communications and is now the campus’ director of admissions for data operations, has been a game show enthusiast since she was a child.

“I loved game shows from day one,” Volk said. “I always wanted to be on one. Always. It was like a goal of mine.”

And her goal was achieved. Twice.

Four years later, she found her chance on social media. “I saw on Facebook that ‘Pyramid’ was casting for season two,” said the 35-year-old Ridge resident. She immediately knew she had to apply. “You have to fill out a bunch of questions and you have to submit a video – I think it was about a 60-second video – about why you want to be on the show.”

After applying, Volk heard back and was asked to do a Skype interview – and then another.  “I actually got the call here at St. Joseph’s that I was going to be on the show,” Volk said. “I lost it.” 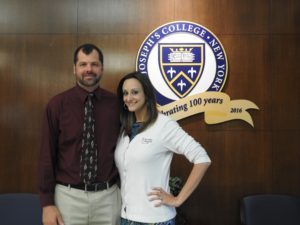 Once she found out she had landed a spot as a contestant, she began practicing with her husband, Robert Volk, SJC’s coordinator of enrollment technology. “My husband and I watched season one, and we would play. We would practice every single night,” she said.

When they finished season one, Volk kept practicing. “We would watch older versions of the show, whether it was Dick Clark or it was Donny Osmond. Even driving in the car, I would be like, ‘OK, I’m going to give you a clue! Don’t look!’” Volk said. Although her husband grew tired of practicing, Volk never did. “You just have to prepare as much as  you possibly can. It’s an experience of a lifetime,” she said. 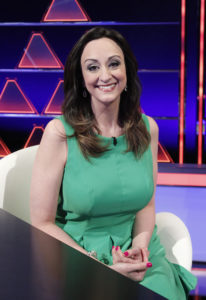 Finally, the day came for Volk’s appearance on “Pyramid,” a game that features two contestants, each paired with a celebrity.

Based on clues said to them by their teammates, contestants attempt to guess a series of words or phrases. The two contestants square off for the chance to get to the winner’s circle for a chance to win $50,000.  With two rounds per game, each contestant has a shot to win $150,000.

“When I was playing the game, I was just having fun and I forgot that there were cameras there and all these people watching,” Volk said.  Although she fell short on her first chance to get to the winner’s circle, she didn’t let that get her down.

A second too late, Decker guessed Kötte’s final clue, leaving them in a tie. “I felt like I had two strikes against me,” Volk said. “I had to see if they got their point, and then when they didn’t, I thought, ‘All right. One hurdle by-passed.’ But then I had to see if I won the tie. And that was another couple minutes of them looking to check the timing of the answers.”

When Volk and Ohno were determined to be the winners, Volk didn’t even hear her name called. “I just heard the bells going, ‘Ding ding ding!’ And I couldn’t see if it was my table that was blowing up,” she said. “I looked at a monitor and saw that it was, and I completely just lost all control of emotion the entire time after that. That was the only time that I was significantly nervous.” 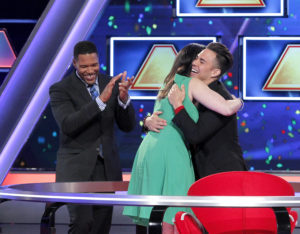 Ohno managed to calm her down before the “Pyramid” winner’s circle round. Volk recounted Ohno’s words that helped her in that final moment. “He said, ‘Forget everything around us. Just look at me. We’ve got this. It’s just you and me playing a game. Pressure’s my life. I’ve lived under pressure my whole life’ (obviously, he’s an Olympian), ‘Just breathe and listen and focus on me.’” And then they won, making Volk the winner of $50,000.

Just eight days before the filming of the show, Volk was extremely ill.

“I had a bacterial infection,” she said. “I didn’t think I was going to be able to tape the show.” But make it she did. “I remember when I was sitting in the winner’s circle and (Ohno) got the last clue, the only thing that kept racing through my mind was, ‘Thank you God for everything,’” Volk said.

“It was just a moment that I will never, ever forget. I couldn’t believe it happened. After everything, after being so sick and not thinking I would be able to make it and then being there, it was just incredible.”

Volk and her husband have already discussed what to do with her winnings.

“We want to work on our basement for our 6-year-old son, Bobby,” she said. “And then we really want to save some. Bobby’s going to be going to college before I know it.  And we’re going to do some sort of vacation.”

A Celebrity at SJC

Volk’s coworkers have been proud of her from the moment she found out she was going to be a contestant on “Pyramid.”

“Everyone here was so supportive,” Volk said. “Everyone was so pumped for the experience.”

Since watching the episode, which aired Sunday, July 9, Volk’s colleagues have had a lot of fun joking with her – especially in regard to her clue for the word “turtle,” which she described as an animal with a house on its back. 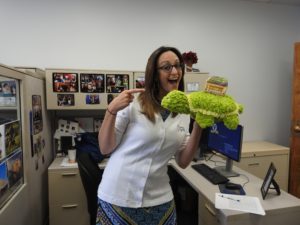 Andrea Gallo Volk ’04 holding a stuffed turtle with a little house on its back that her coworker Kathleen Magistro got her.

“It was the first thing that came to my mind!” she said. “When you talk to kids, you say the turtle carries its little house! I don’t know. But that’s the running joke right now. But it’s cool. I’ll take it forever, that’s fine by me.”

As a student at St Joe’s, Volk was an active member of student government, serving as vice president as a junior.

“I think having that experience here at St. Joseph’s not only allowed me to do well here academically and extracurricularly, but they also helped to mold me into who I really am today,” she said.

To this day, Volk still loves it. “This school has been a part of my life for 17 years. Having the experiences here socially and academically just really helped me to become who I am today. Without St. Joseph’s, I don’t think I’d have nearly as much confidence or drive as I do now.”

Putting Nix on the Ballot