St. Joseph's University, New York student discusses picking a major, being a visually impaired student and plans for after graduating 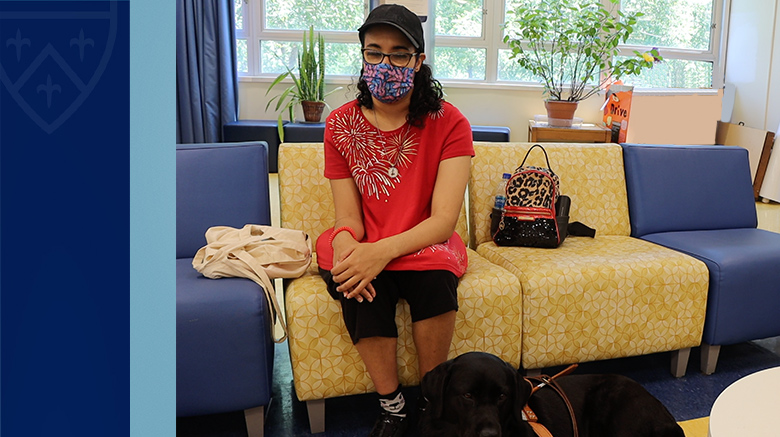 If she had to pick someone as her biggest inspiration in life, Sydney Steuernagel would say her grandma, Barbara Codispoti. After all, she followed in her footsteps of going to St. Joseph’s University, New York.

“She’s very optimistic,” said Steuernagel, who expects to graduate this month with a bachelor’s degree in human relations — an interdisciplinary major that combines aspects of psychology and sociology — and minors in criminal justice and therapeutic recreation. “She always sees the best in people and situations, but she also has really good instincts. She’s super kind, and she’s just a good role model to have.”

And as someone who’s visually impaired, it was helpful for Steuernagel to have her grandmother, who graduated from the Long Island Campus in 1998 with a bachelor’s in health administration, to assist her in navigating the campus.

“I tease her that she has a bigger social circle than I do; she knows everybody and likes talking to everybody,” Steuernagel said of her grandma, who was recognized during the campus’ 2019 Leadership Luncheon award ceremony for her involvement at the University. “She made a lot of friends with staff and faculty, and since she’s retired, socially I think she liked having the connections.”

Steuernagel was recognized at the same Leadership Luncheon, earning a Leader on the Horizon award. She served as secretary and then president of the Sociology Club, and has been a member of the Psychology, Criminal Justice, Recreation, Educators and English clubs, as well as Studio 155.

Steuernagel explained that another pro to picking St. Joseph’s University was how easy it was for her to learn to navigate the campus.

“I think up until last year, I was the only visually-impaired student on campus, and I was always surprised by that because I think, from a vision standpoint, it’s a very simple campus to learn because we’re small and our quad is pretty much a square,” she said. “I find, mobility-wise, that it’s pretty straightforward.”

Not only did Steuernagel appreciate the simplicity of the campus’ layout, but she also appreciated the campus community.

“I found that our staff, faculty and students are all very friendly, helpful, accepting and accommodating,” she said. “They’re also all really cooperative with each other, which is helpful for students. When they all work together, that helps in terms of access, too.”

Steuernagel even had the pleasure of working with St. Joseph’s staff to help develop accessibility guides and standards.

“I was a student advocate in the Office for Tutoring, Academic Development and Student Accessibility Services, so I put together resources for students on a bunch of different topics, including academics, work, accessible books, service animals and self-advocacy in college,” Steuernagel, 23, said.

“It was nice working with Student Involvement as well, particularly in regard to access, because it’s often not a conversation that gets to be had between the students who need the access and staff,” continued Steuernagel, who helped make events more accessible and reviewed digital programs and flyers to make sure they were accessible for screen readers.

Just this summer, Steuernagel got partnered up with her first guide dog, a black lab named Gretchen.

“She loves to sleep, which is useful for me because she’ll sleep while I work,” said Steuerngael, who graduated from Bellport High School in 2017. “She’s awesome. She enjoys playing fetch, but she also loves guiding, which is nice. I knew that going into this, but it’s nice to see how much she enjoys her job.”

The Medford resident was the first recipient of the Frieda Englberger Endowed Scholarship, which benefits Long Island Campus students with one or more physical disabilities who are in need of financial assistance to continue their education at St. Joseph’s.

“I felt very honored to be chosen,” Steuernagel said. “When I learned about Frieda’s story, I found it to be both remarkable and inspiring. The fact that she was an everyday person and was able to save and invest in such a way that she obtained such a large amount of money by the end of her life, I think it’s incredible, and then that she chose to leave it for a college student when she herself had not been one, and didn’t have any particular relationship to St. Joseph’s University, was amazing.”

Steuernagel, who is taking a year off to intern with a nonprofit focused on disability advocacy, plans to pursue a master’s in library science the following fall with the hopes of becoming a children’s librarian.

“Something I want to do as a librarian actually is work with kids — and parents of kids — who aren’t able to read print or can’t read very well, and just make them more aware of how many different options and formats there are for them,” she said.

Becoming a Business Owner: Catching Up with Greg Melita ’06