Many ‘Besties’ Meet While at SJC Brooklyn

Ginny McLaughlin ’62 made many lifelong friends at St. Joseph's College 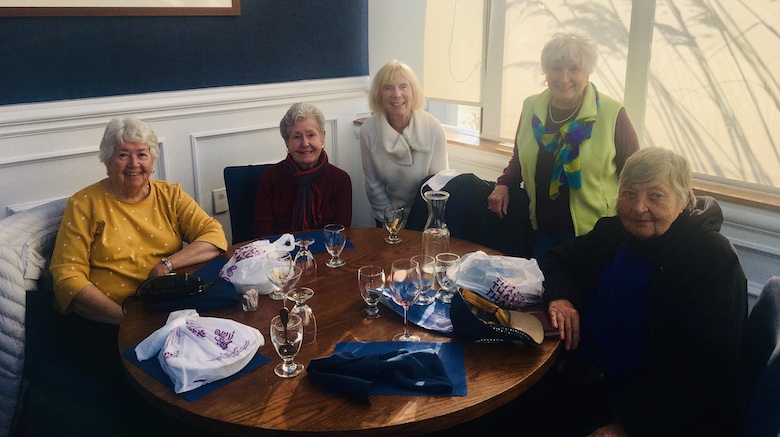 St. Joseph’s College turned out to be a prime place to make lifelong “besties” for Ginny O’Rourke McLaughlin, who graduated from SJC Brooklyn nearly six decades ago.

No matter where she was on campus, McLaughlin found herself speaking to new people and making new friends. To this day, she enjoys meeting up with her Class of 1962 classmates in the city for lunches, to attend shows, and just stroll. Together, they shared all of life’s highs and lows and, somehow, sprinkled in nearly every conversation, are the memories they made at St. Joseph’s College.

“I bonded very easily with girls because we were all highly motivated,” McLaughlin said. “We were good students, and many of the girls were the first ones in their families to go to college.”

McLaughlin, a member of the SJC Long Island Alumni Association Board, comes from an SJC legacy family: her mother Anne Hennessy O’Rourke graduated from the College in 1935 and her late sister, Annie O’Rourke, graduated in 1971.

McLaughlin created an endowed scholarship in her younger sister’s name that benefits an SJC Brooklyn student each year.

“As a child it was a big deal every year when my mother went to the St. Joseph’s College for Women luncheon, so I continued to do the same,” McLaughlin recalled. “My friends and I have gone faithfully for all these years, since 1962. We just love the spring luncheon!”

After graduation, McLaughlin became a teacher in New York City’s public school system, before getting her graduate degree and transitioning to becoming a speech pathologist. Later, she moved to Huntington, where she continued working in speech pathology. She retired in 1997.

Getting involved in extracurricular activities helped McLaughlin connect with her peers. They were active in clubs — McLaughlin took part in theater and chaired the religion committee — and liked to get egg creams after class and go to parties together on the weekends.

It was this foundation that led McLaughlin to make many lifelong best friends at St. Joseph’s College.

McLaughlin’s friendships from SJC are dear to her and she loves to reminisce about them. She recalled a few college summers spent with SJC friends at the O’Neill House in the Catskills. And she’ll never forget Easter Break during her senior year, when she borrowed her uncle’s car and took a road trip with a few college friends to Canada. The girls set out to “sightsee and meet some cute Mounties” — and were successful in their mission, she said.

Since graduation, she’s visited SJC friends Jeannie Foley Edwards and Alice Sheridan D’Anna in Florida and spent summers at gatherings hosted by Mary Collins Macchiarola at her Breezy Point, Queens, home. Staying in touch with the alumni office helped her reunite with her college friends as the years went on, McLaughlin said, noting the joy she felt when reconnecting with her classmate and friend Anita Milaccio at their Golden Jubilee.

“Of course you have friends in other dimensions of your life, but the ones from college are the ones you share an extraordinary time of your life,” McLaughlin said. “Getting an education is the best thing, and it will never be taken away from you. It was hard — and you were sharing it with these same women.”

College Friends Reunite as Colleagues on the Alumni Board