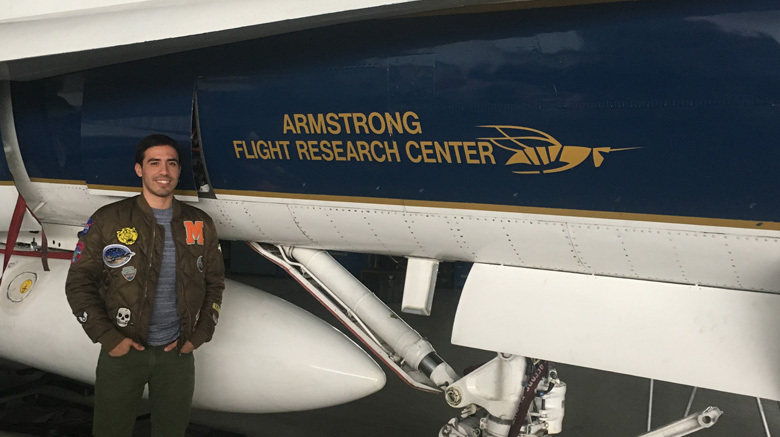 One small step for Matt Ramirez ’17, one giant leap for his career.

After landing an internship at NASA’s Armstrong Flight Research Center (AFRC); the SJC Brooklyn mathematics major – a former Chapel Player and a member of the College’s first-ever men’s swimming team – is one step closer to turning his lifelong dream of becoming a pilot and ultimately an astronaut into a reality.

Ramirez began his journey by applying to 15 internship opportunities at NASA, knowing that only one or two interns are selected for each program. He was hired in late January for NASA’s AFRC predictive analysis internship, located at Edwards Air Force Base in southern California.

The Woodhaven, Queens, native has always been captivated by flight, space and engineering.

“Everything – from all types of aircrafts to learning about the Apollo missions and the interesting subject of physics – that’s involved with the study of our universe,” Ramirez said. “I have always wanted to have an impact on mankind through science and engineering.”

Over four months, the predictive analysis internship is charged with producing cost estimates and developing cost models for various NASA projects and research. Ramirez is responsible for gathering data on NASA X-Planes and building a cost model that can produce accurate cost estimates for future models. There is currently a faulty cost model for the X-Planes project, due to mathematical errors and lack of data. Ramirez works with his mentor Steve Sterk, the only cost engineer at Armstrong, to investigate this issue and conduct intensive data mining to reconstruct the X-Plane cost model.

As an intern at AFRC, Ramirez interacts with NASA employees, engineers and the finest test pilots on a daily basis.

“It’s a small community with the brightest minds in the world,” Ramirez said. “Everyone that works here is so dedicated to their work and love everything they do. These are the most exciting jobs to have. There is so much to see, explore and there are always exciting projects being worked on.”

Ramirez plans to continue studying mathematics and electrical engineering after graduation. He has set career goals to eventually work for NASA as a project manager and test pilot. He is enrolled in flight school at Edwards Air Force Base and hopes to achieve his student pilot certification in two months.