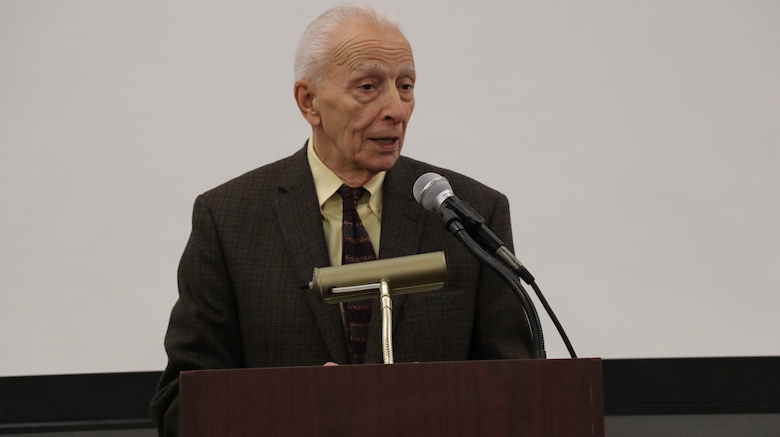 The way news is consumed and delivered has changed drastically throughout political reporter Richard Benedetto’s career. 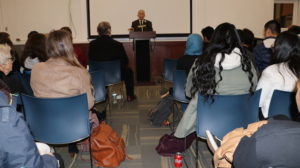 Benedetto’s visit to SJC began Oct. 22 at SJC Long Island where he spoke to journalism classes and delivered a pair of presentations,  “The White House Press Corps: Then and Now” and “Journalism in the Age of Social Media and Fake News.”

Later in the week, Benedetto presented at SJC Brooklyn.

Theodore Hamm, Ph.D., chairperson of the journalism and new media department at SJC Brooklyn, said he was impressed with Benedetto’s visit.

“It was a real pleasure for SJC students to hear from an eminent journalist like Richard Benedetto,” Dr. Hamm said. “He reminded us that it’s our job as producers and consumers of media to pursue the truth.”

Dr. Hamm said Benedetto really engaged his students, talking to them one-on-one about what it was like covering local issues upstate — in Buffalo, Utica and Albany — before making his way to Washington, D.C., to cover the White House.

During a common hour lecture Oct. 25 inside the student lounge at Tuohy Hall, Benedetto encouraged students to students be smart news consumers. He explained that in the age of social media there is a lot of news circulating that is false or bias, and it’s becoming increasingly imperative for the reader to know how to differentiate what can be trusted.

“It’s up to you, the consumers, to be the gate keeper of news,” Benedetto said. “That used to be the editors — but not anymore.”

Benedetto explained that in the past practices, several editors would read and fact check an article before it made it into the next day’s newspaper. Conversely, in today’s media, Benedetto said speed takes a more prevalent role, and quality can take a hit as a result. 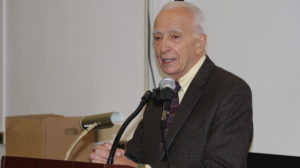 Benedetto offered tips on how to determine what is a trustworthy news article.

He said a news consumer should always think critically about an article, and about the source it came from. “If the story is not coming from a reliable news source, you’ve got to check it,” he noted.

Benedetto explained that in the age of “clicks,” even reliable news sources — like the New York Times, Washington Post, or CNN — try to move fast, get a lot of views, and build an audience. Sometimes the best way to know that a story is accurate is to read about the same topic in multiple sources, he noted.

And, perhaps, most importantly: “If it sounds too good to be true, it probably is,” he said.

Benedetto noted that consumers should also pay attention to the difference between an editorial and a news article. Editorials and columns typically involve a writer including his or her own bias. The opinion pieces are separate from the news section of a newspaper.

Benedetto suspects courses on being a smart news consumer will be integrated into high schools in the future, so individuals can better learn how to decipher news at a young age.

“We’re so connected with so much information,” Benedetto said. “We don’t know what to make of it all … we’re still sorting our way through this type of new media

He continued: “We’re going through a time that folks are going to write books about — that’s for sure.”

The Woodrow Wilson Visiting Fellows program, administered by the Council of Independent Colleges (CIC) in Washington, D.C., brings prominent artists, diplomats, journalists, business leaders and other professionals to campuses across the country for a weeklong residential program of classes, seminars, workshops, lectures and informal discussions.

Study Abroad with SJC this Spring