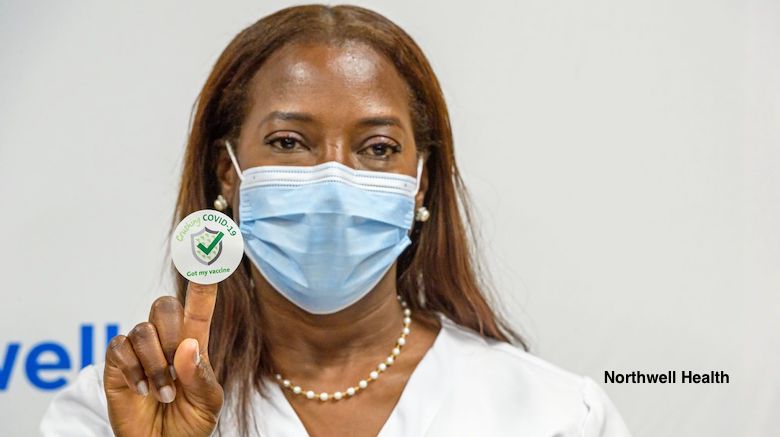 The award — the United States’ highest civilian honor — recognizes Dr. Lindsay’s hard work serving on the front lines during the COVID-19 pandemic and becoming the first American to receive a COVID-19 vaccine outside of clinical trials, according to a White House news release. Dr. Lindsay received her two vaccination shots on Dec. 14, 2020, and Jan. 4, 2021.

“I was just immediately overwhelmed with a ton of emotions — delight, pride, gratitude,” Dr. Lindsay told CBS News, shortly after learning she would receive the Presidential Medal of Freedom. “(I was) just humbled and honored to even be considered for such a prestigious recognition.”

“This prestigious honor is yet another validation of Sandra’s heroism during the pandemic. She fought the virus on the frontline and ultimately made history by rolling up her sleeve and becoming the first American to be vaccinated against COVID-19,” Dr. Boomgaarden said. “We are humbled and extraordinarily proud to count Sandra among our alumni.”

U.S. President Joe Biden will present the awards at the White House on Thursday, July 7, at 2 p.m.

The recipients come from varying backgrounds; each has played a unique role in making the country a better place.

“These seventeen Americans demonstrate the power of possibilities and embody the soul of the nation – hard work, perseverance, and faith,” the White House said in a news release. “They have overcome significant obstacles to achieve impressive accomplishments in the arts and sciences, dedicated their lives to advocating for the most vulnerable among us, and acted with bravery to drive change in their communities – and across the world – while blazing trails for generations to come.”

In addition to the Medal of Freedom, President Biden previously recognized Dr. Lindsay during his Inauguration Day gala virtual programming in January 2021.

Brian Harmon contributed to this report.