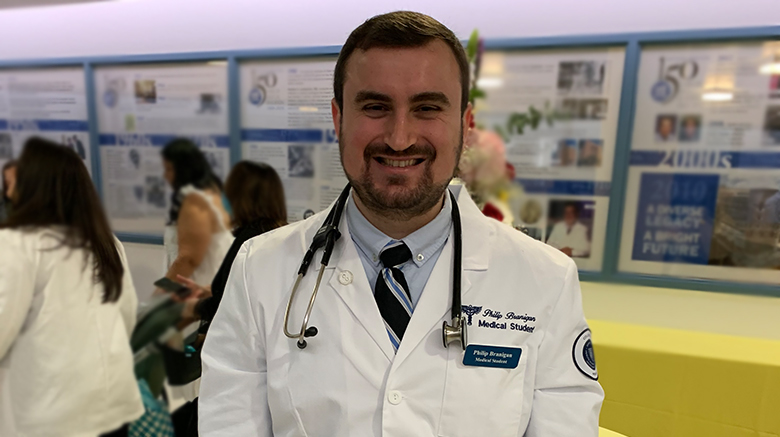 Ever since he was a child, he wanted to be a physician. 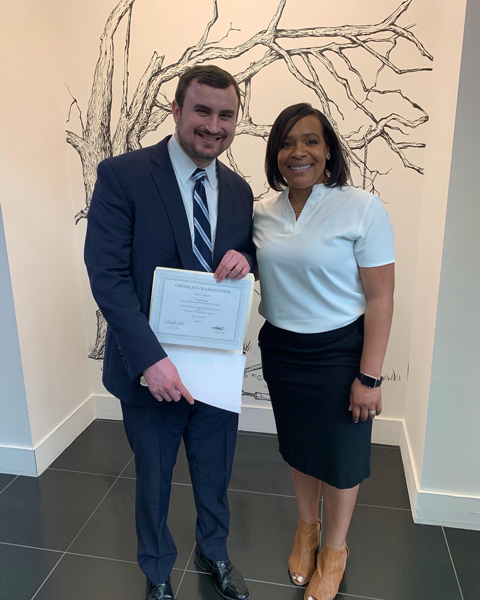 Branigan with his master’s degree.

That’s what led Philip Branigan to earn a B.S. in Biology from St. Joseph’s University, New York in 2016. And it’s what’s leading him to now pursue an M.D. at the SUNY Downstate Health Sciences University College of Medicine.

“I have always loved medicine and enjoyed helping others,” said Branigan, who also earned an M.S. in Biomedical Sciences with a Concentration in Physiology and Biophysics from the Renaissance School of Medicine at Stony Brook University this past spring.

“My various clinical experiences, such as shadowing physicians, volunteering at hospitals and volunteering as an EMT-B at Medford Volunteer Ambulance Company, have allowed me to test and ultimately solidify my desire to become a physician,” the 28-year-old said. “I want to practice medicine to serve my community.”

Branigan, who expects to graduate with an M.D. in four years, is keeping an open mind as to what area of medicine he may want to specialize in. 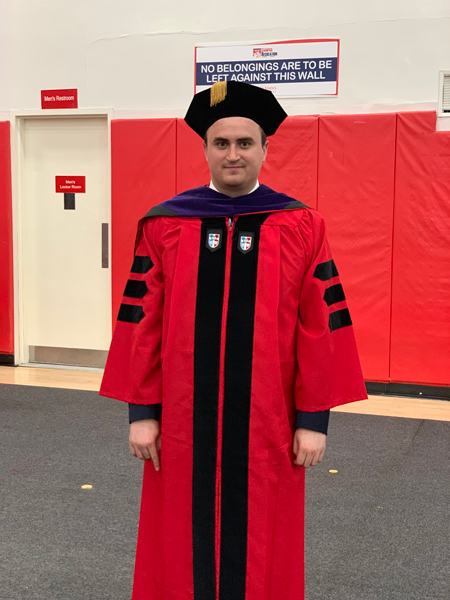 Branigan graduating with a J.D.

Branigan’s passion for biology extended to outside the classroom during his time at St. Joseph’s Long Island Campus. He was an active member of the Biology Club, Chemistry Club and American Red Cross Club. He also played on the men’s tennis team during his last semester.

But that passion for biology almost flatlined during a particularly challenging chemistry class.

“My most impactful moment from my time at St. Joseph’s was the first semester of my sophomore year,” he recalled. “I was taking Organic Chemistry, Genetics and Calculus. I remember sitting in the chemistry lab listening to Dr. Stadler talk about our organic chemistry experiment for the day and doubting whether I was smart enough to continue as a student in her class.”

“After internalizing this feeling, I studied hard and was pleasantly surprised when I received my first test grade back — and realized I had earned one of the highest grades in her class,” he said. “My grades from that semester motivated me to continue as a biology student.”

Even though Branigan knew since childhood he wanted to become a doctor one day, he put those interests on hold after graduating from St. Joseph’s — to pursue a law degree.

“My entire family values education and public service,” said Branigan, who in 2019 earned a J.D. from St. John’s University School of Law. “My father and sister have both served as assistant district attorneys.” 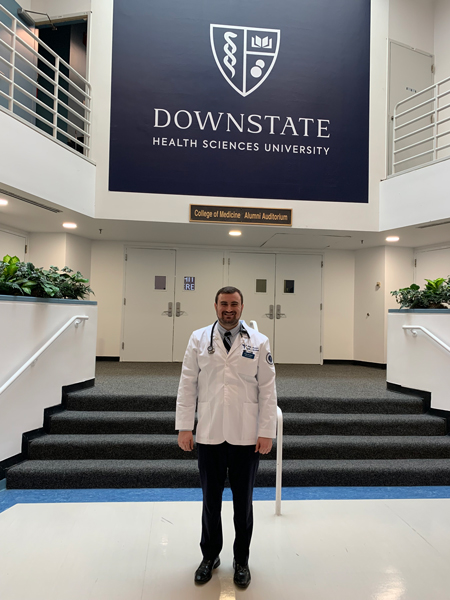 As a student at St. Joseph’s, the Brooklyn resident was inspired to combine his interest in medicine with his family’s passion for law.

“I really loved science; during my courses, I became intrigued with how science, medicine and technology move from the discovery process to the marketplace,” said Branigan, who grew up in Calverton and graduated from McGann Mercy Diocesan High School in 2012.

“My fascination with biotechnology got me thinking about the role of patents and the law, which motivated me to attend law school to pursue my interest in becoming a patent attorney,” he continued. “As a law student, I enjoyed studying the law, participating in legal research and parsing out legal arguments.”

However, he couldn’t help but feel like something was missing. After passing the bar and being admitted to the practice of law in New York in December 2020, Branigan made the decision to return to his true passion of medicine.

“Since returning to my science studies and health-related clinical activities, I have felt a passion and a sense of fulfillment I did not feel when studying the law,” he said.

Branigan participated in his university’s White Coat Ceremony on Sept. 16. He’s looking forward to what the next four years hold for him.