Sharon Dalzell, 61, expects to earn a B.S. in Health Administration in 2023 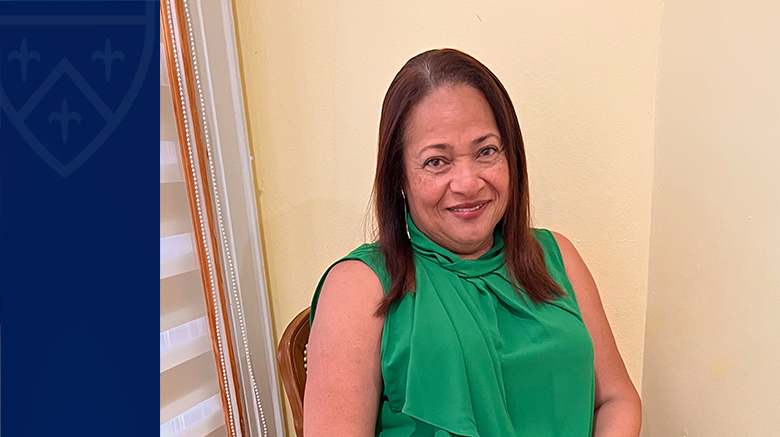 At the age of 57, Sharon Dalzell decided to enter the world of higher education and earn a bachelor’s degree — just for the personal satisfaction of it.

“I never attended college before,” said Dalzell, now 61, of Brooklyn. “In my country, Guyana, South America, we wrote O’Levels, which were overseen by the England, London Board of Education. I took six subjects and passed four: Math, English, English Literature and Chemistry.

“I always wanted to go back to school, so I Googled St. Joseph’s and the decision was made,” continued Dalzell, who expects to graduate with a B.S. in Health Administration from St. Joseph’s University, New York’s Online Campus in January 2023. “My favorite part of St. Joseph’s online program is the ability to complete my credits from the comfort of my home — and not have to travel, especially with all these viruses flying around.”

Dalzell is set to become the second of six children in her family to earn their college degree.

More Than Just Reaching a Goal

Earning this degree means more to Dalzell than just reaching a goal — it’s confirmation of her ability to fight back and be successful in the face of a challenge. More than that, it’s proof that she was helpful when she felt helpless.

“Thirty years ago, my daughter fell ill with transverse myelitis and was left paralyzed,” Dalzell said of her eldest daughter, Andrea. “I felt helpless.”

Dalzell, who worked in the finance field for 20 years, decided to take the market falling as a sign to go back to school to become a certified billing and coding specialist.

“After I got a denial for a medical necessity service for Andrea, I was able to fight back and be successful,” she said. “Once I understood the ins and outs of medical billing and coding, there was no looking back.”

Now, Dalzell works as a financial clearance specialist at New York Presbyterian Hospital, where she helps to ensure other patients don’t experience the same denial as she and her daughter did.

In addition to returning to college to get a degree in health administration, Dalzell and her daughter also turned their heartache into helping others by becoming advocates for those with physical disabilities.

“When Andrea started college, she started to speak up about the disadvantages of being a student with a disability and the accessibility of her college,” Dalzell said of her daughter, 35, who has used a wheelchair since she was 12.

Dalzell explained that Andrea, who went to a 91-acre college positioned atop a hill, constantly fought with the institution to ensure that the pathways were clear, especially when the ground was covered with snow.

“Here is where an advocate was born,” Dalzell said. “Another advocate was born after Andrea asked me to join her at a Roll on Capitol Hill, an NCart event, when we went to Washington, D.C., to lobby for accessibility, not only in the higher education sector but also in private sector job markets.”

Dalzell said Andrea was told that she shouldn’t become a nurse because of her disability.

“She was told she would be considered a liability in all places of health care services,” Dalzell said. “She became a BSN RN in January of 2018, and she now holds a master’s in nursing education.

“She has brought awareness with regard to how inaccessible many schools, doctors’ offices, restaurants, parks, colleges and more are,” Dalzell added.