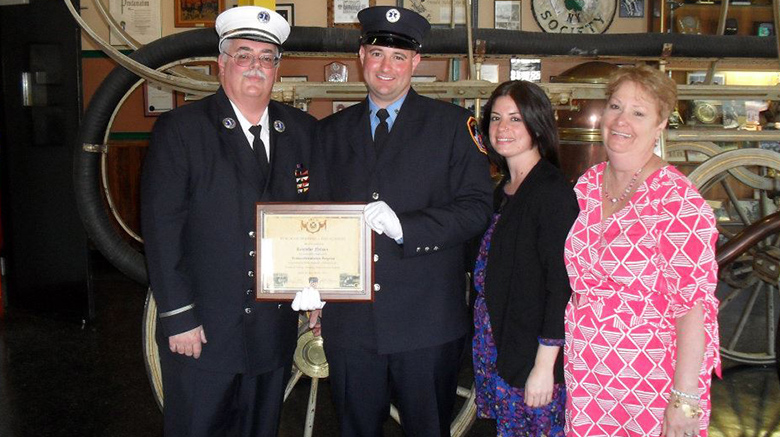 Pictured above is Lieutenant Walter J. Nelson Jr. with his son Kristofor, daughter Pia and wife Dr. Mary Nelson at Kristofor’s graduation from the FDNY Academy.

Dr. Mary Nelson’s first thought when the Twin Towers collapsed on Sept. 11 was to ensure her students and staff were safe.

“I was a first-time assistant principal and the principal was in a meeting,” recalled Nelson, Ed.D., who earned a B.A. in Child Study from St. Joseph’s in 1976. “My first reaction was to make sure my staff and students were safe and to release staff who needed to find their husbands or wives. My next concern was the safety of my two children. And finally, I thought of Walt.”

Dr. Nelson’s husband Lt. Walter J. Nelson Jr., who worked for Emergency Medical Services of the New York City Fire Department for 33 years, was supposed to be off of work that Tuesday, at their home in Brooklyn.

“My first thought was thanking God my father was off that day,” shared Mr. and Dr. Nelson’s daughter Pia Nelson, who graduated from St. Joseph’s in 2007 with a bachelor’s degree in child study and again in 2010 with a master’s degree in literacy and cognition. “Little did I know he would have been called in anyway.”

Rescue and Recovery at Ground Zero

After the call went out for all hands on deck, Walter Nelson arrived at Ground Zero, where he worked in rescue and recovery through Dec. 23, 2001.

“He was driven by the love for the job, but also by a mission to find my cousin Joseph Sacerdote, who worked for Cantor Fitzgerald,” said Dr. Nelson, 68, whose cousin died on Sept. 11.

“I never knew the breadth of my husband’s work at Ground Zero until I needed to get documentation to prove his rescue and recovery efforts,” added Dr. Nelson, who now works as an adjunct in the education department at St. Joseph’s University, New York.

“I was very proud of my dad,” said Pia, now 37, who, due to her father’s work at Ground Zero, received a four-year Rescue and Recovery Scholarship upon graduating from St. John Villa Academy.

“He would work long hours, and he would come home smelling like smoke and covered in dust,” she continued. “My dad was not only a hero to the FDNY but also to me. He helped many individuals that day and the days after.”

Mr. and Dr. Nelson’s son Krsitofor was inspired by his father’s work.

“As a child, I always saw my Dad as a hero,” the 41-year-old said. “I am an Emergency Medical Technician, as well as a CPR  Instructor with the FDNY EMS. I am my father’s son, and I’m proud to continue his work.”