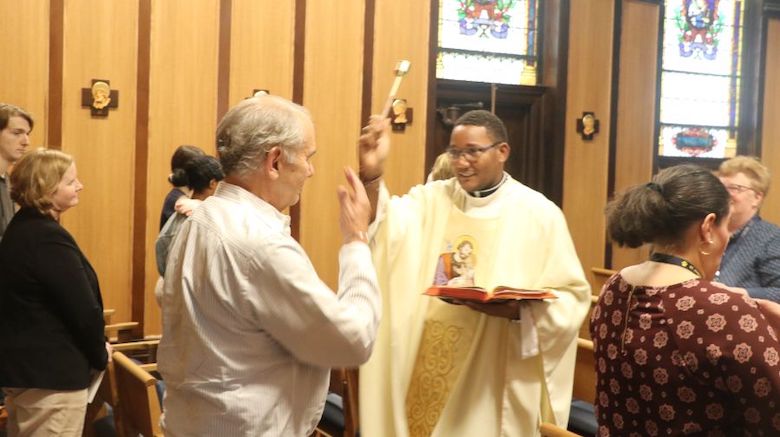 Students, professors, staff, alumni and other members of the St. Joseph’s University, New York community gathered in October for the opening Mass celebration and blessing of the Brooklyn Campus’ newly renovated Kennedy Chapel in Burns Hall.

Celebrants at the Mass, which was led by Fr. Juan Luxama, were greeted by new, light-colored wall panels that brighten up the chapel, along with new carpeting and fresh paint, a refurbished floor, and new padded chairs.

S. Marie Mackey, a faculty member on campus and the former director of Campus Ministry, noted that some of the other changes included new vestments, altar cloths and candles. The thurifer — the metal censer suspended from chains, in which incense is burned during worship services — also is new.

The Stations of the Cross inside the place of worship were stained to match the new panels. Coming soon is a bank of electronic prayer and remembrance candles and four new statues from Demetz Studios in Italy.

The statues — representing the Blessed Virgin Mary, St. Joseph, Ignatius of Loyola and St. Theresa of Avila — will be positioned in the four corners of the chapel.

Christian Branch ’11, a former St. Joseph’s University staff member at the Brooklyn Campus, visited campus to serve as the cantor during the chapel’s opening Mass.

Hundreds of donors contributed nearly $300,000 toward funding renovations in the Kennedy Chapel and the Lady Chapel in McEntegart Library. The Chapel Fund project was established to recognize the ongoing transformational contributions of the Sisters of St. Joseph to the University.

Guided by S. Marie for design decisions to truly reflect St. Joseph’s mission and values, much of the project’s success stems from her compiling a list of needed items for the chapels that donors could purchase and personalize. The list provided donors with opportunities to purchase and personalize items ranging in price from $40 to $15,000, such as candle holders, altar cloths, liturgical books and statues.

Donors purchased more than 135 personalized items, including chairs with inscriptions.

A Need for Updates

“I became aware a few years ago that many of the items being used during masses were the same ones used during my years as a student in the 1980s,” S. Marie said. “I thought about creating a fundraising project where alumni could donate to help update the chapels and the items needed for mass.”

With the help of Rory Shaffer-Walsh, St. Joseph’s University’s vice president for institutional advancement, the Chapel Fund was created, as S. Marie focused on replacing existing sculptures with figures that better represent the diversity of the St. Joseph’s community and charism of the founding Sisters.

“The desire was to lighten the Kennedy Chapel by replacing some of the wood panels and adding touches of gold to the beautifully sculpted ceiling,” she said.

The restorations also included gold paint to accentuate the plaster details in the ceiling of the Kennedy Chapel.

The Chapel Fund saw success in the early stages in 2021, but Ms. Shaffer-Walsh saw an even greater opportunity to crowdfund the project on the University’s Giving Day, the annual 24-hour fundraising challenge that calls on St. Joseph’s students, faculty, staff and alumni to give back by supporting causes that are close to their hearts.

“With an additional $16,000 raised from 83 donations, Giving Day was a great way to increase the funding for these renovations,” Ms. Shaffer-Walsh said. “We also received a new piano from (SJNY) Board of Trustees Member Mary Butz ’69. This has been a true crowdfunding success story.”

So happy to hear that the refurbishment is complete. Will there be an opportunity for donors to see the renovations. I donated a chair and would like to see it.