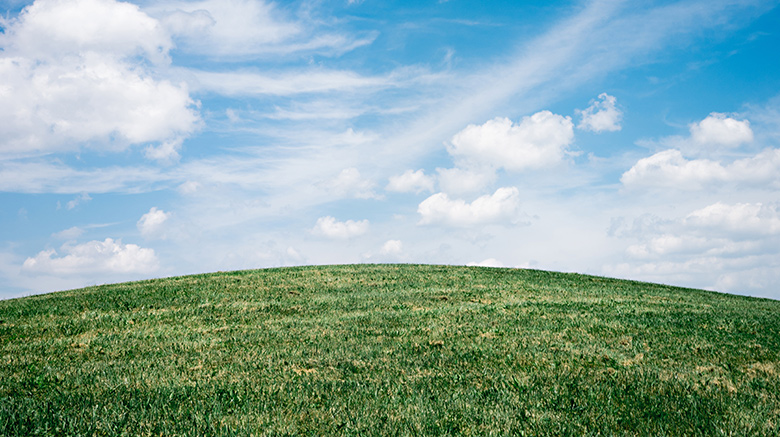 During the event, which was sponsored by the Department of Biology and the Sustainability Committee at the University, students, faculty and staff listened to Pamela Lovejoy, Ph.D., assistant professor of Biology at the Brooklyn Campus, discuss the unintended effects of pesticides.

“Pesticides have been used since the time of the ancient Romans, when they were used to control insects and weeds — often with materials that contained sulfur or heavy metals, or sometimes even salt,” said Dr. Lovejoy, who coordinates the Sustainability Committee at the University’s Brooklyn Campus.

Dr. Lovejoy explained that the pesticides used today are much different than what the ancient Romans used — and much more detrimental to our environment.

“When I think of pesticide use, I think of synthetic pesticides that are commonly sold in stores today,” she said, explaining that these types became more widely used after World War II. “They are chemical agents used to deter, discourage, incapacitate or kill pests.”

These pests vary depending on the field you’re in, Dr. Lovejoy said, but they could include insects, weeds, rodents and fungal diseases.

“In a lot of ways, we are very dependent on pesticide use because we rely on their use in order to produce the amount of food we need as a country,” she said. “The use of pesticides allows us to drastically increase food production, it keeps food prices low, and it also reduces the amount of land that we need in order to grow the food.”

Unfortunately, pesticides have unintended negative effects, as well. The first one Dr. Lovejoy explored was DDT, which became available for agricultural use as an insecticide in 1945 and was believed to have low toxicity in regard to mammals.

“DDT was causing the decline of a lot of birds of prey, such as bald eagles and ospreys, because it was causing reproductive failure,” said Dr. Lovejoy, who also mentioned that insects developed a resistance to the pesticide in the 1950s. “This was one of the first tip-offs that kind of alerted people that DDT was not having the best effect on the environment.”

Eventually, the EPA banned the use of DDT in the United States. However, there are other pesticides that are still in use in the U.S. with negative side effects we’re just starting to become more aware, Dr. Lovejoy explained.

One variety Dr. Lovejoy is particularly interested in is neonicotinoids, a newer class of insecticides used in seed coating to control pests. And because they exist in the tissue of plants, they also exist in the pollen of plants.

“Neonicotinoids are thought to play an effect in the colony collapse disorder (CCD) of honeybee beehives,” Dr. Lovejoy said. “Honeybees have a queen and a bunch of worker bees. And so what happens in CCD, a majority of the worker bees in the colony just disappear.

“It’s been found that bees exposed to neonicotinoids have problems with their flight and navigation,” she continued. “They also effect their taste sensitivity and their learning, as well.”

Dr. Lovejoy explained that since about one-third of the American diet comes from pollinated plants, we depend on honeybees and their ability to pollinate, making this issue a major concern for Americans. Neonicotinoids have also now been found in many different samples of honey across the world.

“Colony collapse disorder threatens domestic agriculture, ecological health and the U.S. economy,” she said. “It’s something to keep in the back of our minds when we consider how much we want to be dependent on pesticides like the neonicotinoids.” 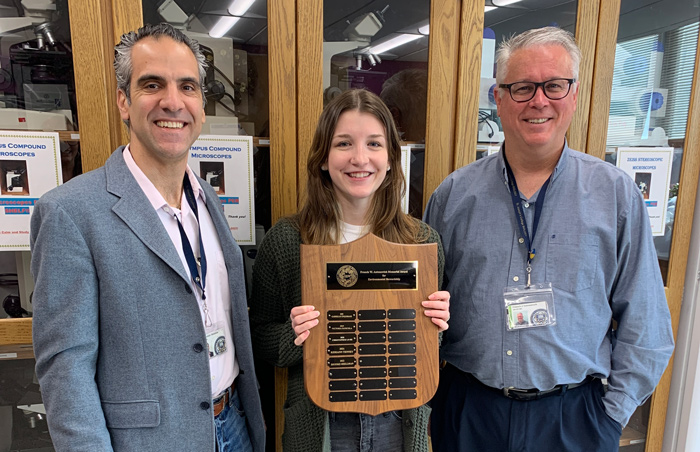 Prior to the seminar, this year’s Francis W. Antonawich Memorial Award for Environmental Stewardship was presented to Brooke Shellman, a senior Biology major with a 3.9 GPA who is an active member of the University’s Sustainability Committee and president of the student-run club Green Team.

“He exhibited leadership, environmental stewardship, academic integrity and warm collegiality with classmates at St. Josephs,” said Konstantine Rountos, Ph.D., associate professor of Biology and Head of the Sustainability Committee at the University, who hosted the event. “He was truly a special student who embodied the University’s goals and spirit of volunteerism and action. In honor of Frank’s academic excellence and sincere passion for the environment, an annual award is given in his name by the Department of Biology in Long Island.”

“As President of the Green Team, [Brooke Shellman] has led it to be one of the most active clubs on campus, providing numerous activities, seminars and events for students to participate in,” said Dr. Konstantine, coordinator of the environmental studies minor at the Long Island Campus. “I have no doubt that she will continue to be a strong advocate for the environment after graduation.”

As part of the University’s annual Earth Week Celebration, the University’s Long Island and Brooklyn campuses are also hosting an e-waste collection through Monday, May 2, which allows members of the community to safely dispose of electronics.

What Can You Do with a Health Care Administration Undergraduate Degree?

Cheers to the Class of 2022 at the Brooklyn Campus of St. Joseph’s University, New York