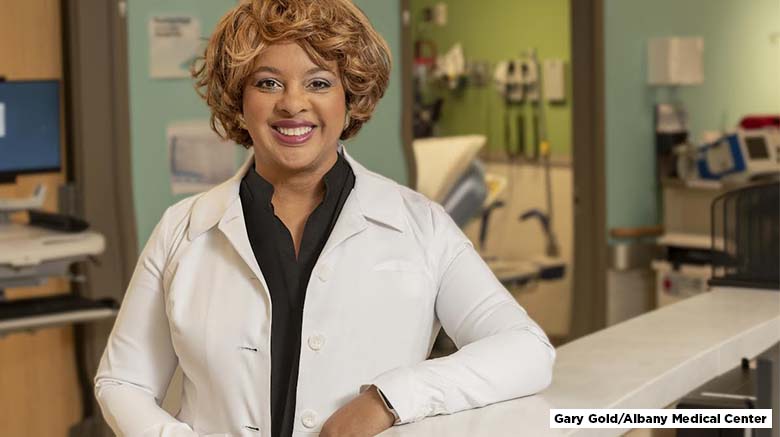 As a child, when someone asked KMarie King ’94 what she wanted to be when she grew up, her answer was always the same: “I’m going to be a doctor.”

Dr. King followed that dream — making history along the way. Her appointment to Chair of Surgery at Albany Medical College in September made her the first Black female chair of surgery at an academic health sciences center in the United States.

“I can’t believe it,” the SJC Brooklyn alumna said of her historic achievement. “First of all, it’s long overdue. But my background and my training really speak to why I was able to achieve this.

“I went to a small college, while most of my peers (in medical school) went to Harvard and Yale and were graduates of very advanced programs — and I was still a top student in my class,” she continued. “That speaks to how well I was trained and how well I was prepared for my medical studies from St. Joseph’s.”

Growing Up in Park Slope

As a teen, Dr. King studied at John Jay High School in Park Slope, Brooklyn (which has since closed and now houses the New York City Department of Education facility) and took part in the City University of New York’s bridge to medicine program concurrently. Then, she enrolled at SJC Brooklyn to pursue an undergraduate degree in biology so she could stay close to home — she was a caretaker for her grandmother who lost her eyesight due to diabetes — and take advantage of the campus’ small class sizes and stellar academics.

After graduating from St. Joseph’s, Dr. King enrolled in medical school, later receiving her Doctor of Medicine from Washington University’s School of Medicine in St. Louis. From there, Dr. King worked her way up the ladder, completing residency and a fellowship — and collecting a few more degrees along the way.

She also recalled how Sister Mary Meier prepared her and her classmates for job interviews by holding mock interviews and sharing tips about how to dress.

“We were eight students in biology, so we really had one-on-one mentorship,” Dr. King recalled. “A lot of us went into the healthcare field … The professors were really invested in us.”

Dr. Hayes said she had no doubt Dr. King would have a prosperous career after graduating from SJC Brooklyn.

“I am enormously proud of KMarie,” Dr. Hayes said. “Am I surprised at her accomplishment? Not at all. She was always a doer and an achiever; always a leader in our department and always ready and willing to help her peers.

“It’s gratifying to see that all of those wonderful qualities have remained with her in her professional career,” Dr. Hayes continued. “Albany Med surely has a winner.”

Dr. King said she hopes the new generation of St. Joseph’s students takes advantage of the College’s resources and dedicated professors to help them go beyond their career goals.

“I’d encourage anyone who is there now to really just dream as big as they want to and not let the size of their world restrict them,” Dr. King said. “They can really become anything with their St. Joe’s education that they want.”

Season Three of ‘Living Our Mission’ Airing in Early 2022