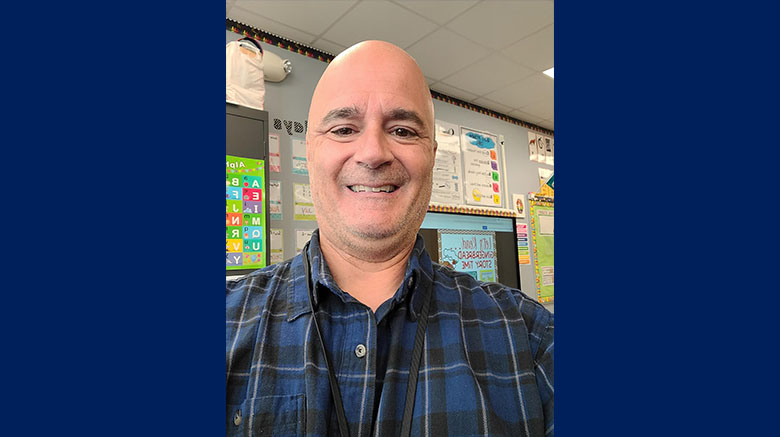 Chris Crisona has taught elementary school in four different states down the east coast since graduating from SJC Brooklyn in 1990.

Crisona, a first-grade teacher at Wedgefield School in East Orlando, Florida, had his first taste of teaching when he was a high school student, tutoring young kids. Tutoring sparked his passion for teaching, inspiring him to apply to St. Joseph’s College to master his craft. He learned the tips and tricks of the trade from his professors in the classroom and through hands-on learning at the Dillon Child Study Center.

“St. Joe’s was the best experience I had in my educational career — I loved St. Joe’s,” said Crisona, reflecting on his years at the College.

Crisona fully immersed himself in Student Life, acting in four Chapel Players performances, attending mixers and taking part in the Student Government Association. He was a class representative in his junior and senior years, spent three years wearing the Bear mascot costume — before the mascot was named Vandy — and helping the Office of Admissions with recruitment efforts.

After three decades as a teacher, Crisona still pulls from the lessons learned at St. Joseph’s from his English professors, Louise Rose and Margaret Jennings, and his child study professors, S. Helen Kearney, Ph.D., and S. Anne Berry.

“They were great inspirations for me,” he said.

Sharing his love of learning with students

Crisona began teaching middle school in New York City during the 1991-92 academic year. Later, he taught in Delaware and Pennsylvania, before finally settling in Florida.

“Working with kids is my favorite thing about teaching,” Crisona said. “Teaching children, introducing a new topic to them, having them give me that ‘what are you talking about’ kind of look but then going into the lesson more and more and you see a light bulb go off in their head and they said, ‘I get it, I get it’ — that makes my day.”

Crisona said he loves teaching the younger children now, especially since there’s less emphasis on standardized tests. He lights up when he tells stories of his students — who he misses teaching all together, in person. His school is operating in a blended model, due to the COVID-19 pandemic, with eight students in the classroom and eight online each day.

This summer, Crisona is set to teach summer school at Wedgefield School and two classes at the University of Central Florida, where he has been an adjunct professor for 15 years.

He strives to encourage a love of learning to all of his students, just as his professors instilled in him at St. Joe’s.

“I’m very appreciative of everything St. Joe’s did for me…” Crisona said. “At St. Joe’s, the professors were very nice. It was a small school — I probably graduated with 70 people — so I got to know everyone. We helped each other, we comforted each other when someone was sad, and I keep in touch with a bunch of them still.

“It was the best experience educationally, and personally, that I ever had,” he said.

An Alumna Educator Making Her Mark in Georgia