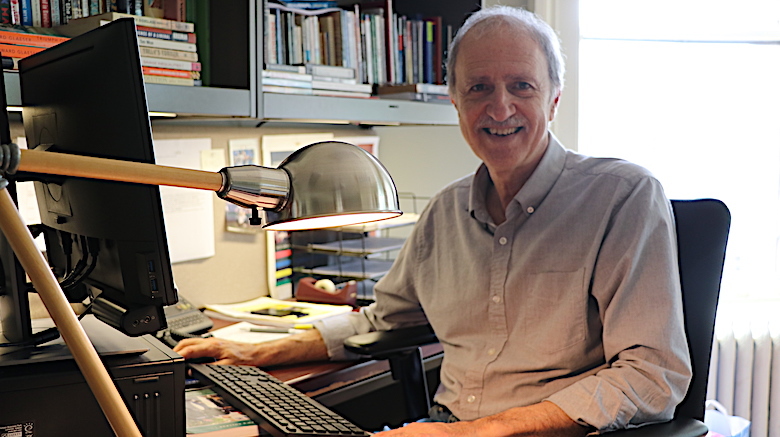 While this will be Dr. D’Angelo’s first administrative position at the College, he’s no stranger to handling leadership roles. Dr. D’Angelo, who has taught at SJC Brooklyn and SJC Long Island, has been the chair of the Department of Social Sciences, as well as program coordinator for the human relations program at SJC Brooklyn since 1992.

“I’m looking forward to this position,” Dr. D’Angelo said. “I hope to extend the good work that was done by Michael Hanophy.”

He continued: “There are two things I would like to accomplish over the next year. One is to continue to strengthen the academic programs at St. Joseph’s. And the other is to work to enhance and spread the academic reputation of the College.”

Growing with the College

SJC Brooklyn — and the surrounding Clinton Hill neighborhood — was a much different place when Dr. D’Angelo began his career as a professor at the College.

Dr. D’Angelo was hired only five years after the College opened its doors to men — up until 1969, SJC Brooklyn was an all women school. At the time, St. Joseph’s was also much smaller in size.

Dr. D’Angelo said he has enjoyed watching the neighborhood boom into the culturally diverse area it is today.

“I’ve always found that Brooklyn — and especially this area in Brooklyn — has been culturally affluent,” Dr. D’Angelo said. “Now, we’re going through a whole cultural and intellectual renaissance in the area with music, literature and education — and the College is very much a part of that.”

Dr. D’Angelo takes pride in the College’s role in enhancing Brooklyn’s culture, particularly through the Brooklyn Voices literary series. Greenlight Bookstore and SJC Brooklyn regularly team up to give local published authors the chance to present and hold discussions about their literary works.

Dean Sticks to His Roots

“I am still going to teach,” he said. “It’s important not to lose touch with students and the teaching-learning process.”

Dr. D’Angelo is constantly embodying St. Joseph’s pillar of intellectual values through his personal research and work with students. Through research that has mainly focused on race, ethnicity and immigration, he written extensively on the civil rights movement — including his 2000 book, “The American Civil Rights Movement: Readings and Interpretations.”

Most recently, in 2017, he published “Taking Sides: Clashing Views in Race and Ethnicity,” a book that that dives into controversial issues in a debate-style format. He co-edited the 11 editions of the book with a longtime colleague, Professor Herbert Douglas.

Dr. D’Angelo was recognized by Harvard University in 1998  when he received a National Endowment for the Humanities Award for his participation in the seminar “Teaching the History of the Southern Civil Rights Movement.” He was also the recipient of a pair of coveted fellowships from the National Science Foundation and a research award from the National Institute for Justice.