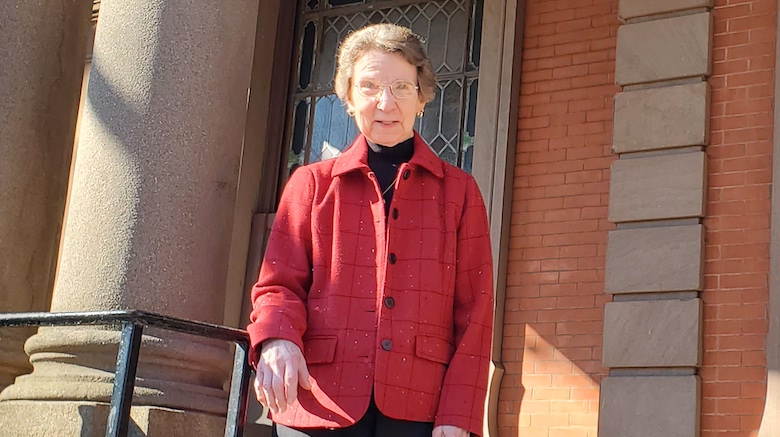 This year marks the 25th anniversary of the selection of Sister Elizabeth A. Hill ’64, CSJ, J.D., as the College’s sixth president. As part of its annual National Catholic Sisters Week coverage celebrating the contributions and charism of the Sisters of St. Joseph, the College caught up with Sister Elizabeth to discuss her presidency.

When chosen for the position, Sister Elizabeth had an impressive range and depth of experience, having served as her predecessor’s executive assistant for 17 years.

“Sister George Aquin O’Connor was a woman of extraordinary courage, who left behind very big shoes to fill,” Sister Elizabeth said. “Having worked with her, though, I knew of all of the incredible possibilities that existed as well as the challenges St. Joseph’s faced. Thankfully, I had a great many people pulling for me and supporting me as we moved forward.”

Sister Elizabeth’s tenure saw the College dramatically expand both physically and in reputation, with the College’s physical footprint expanded on both campuses to support the needs of a steadily growing student population. However, in her view, the most important accomplishments were the ones that directly addressed the student experience at the College.

“I am most proud of the development of the faculty during my time as president,” she said. “With the help of the deans and two strong provosts, the College hired new faculty, who brought with them ‘a touch of rhapsody.’ Their passion for scholarship and research showed in their teaching and presented our students with a range of new opportunities.

“We also embraced technology and integrated all of the benefits of the digital revolution into the student experience,” Sister Elizabeth continued. “Finally, I am also proud of the establishment of the Council for the Arts – each of us possesses an appreciation of beauty and wonder, and the arts provide the means by which to foster this in hearts and souls.”

Sister Elizabeth’s presidency also provided for the opportunity to learn more about herself, as she worked to grow and expand the College.

“I discovered that I was more of a risk-taker than I ever knew … I enjoyed the excitement of trying new things and experimenting,” she said. “I also realized that when it came to leadership, I was good at recognizing the talents and energy of individuals — I was able to encourage and support them as they developed their gifts and applied them creatively to their work.”

Looking back at the past 25 years and charting the differences between now and then, Sister Elizabeth touched upon the theme of “continuity and change” that was at the heart of her inaugural speech.

“Technology has radically altered how we communicate, how we convey information and the channels that disseminate this are changing every single day,” she said. “The students we serve are also changing — we’re just as likely to serve a traditional age, 18 to 24-year-old student who still lives with their parents as we are a young person working full-time with children of their own and very adult responsibilities to manage.

“There’s also been a marked decline in civility and respect for one another in today’s polarized world,” she continued. “However, that’s where the role of a college is most useful and, in particular St. Joseph’s, with its emphasis on preserving the integrity and primacy of each of us as individuals.

“We allow for the exchange of ideas and foster honest, good debate in a respectful climate. This feeling of respect and the joy of learning and discovery — this is how we’ve always distinguished ourselves and we continue to do so.”

“Sister Elizabeth’s contributions to the College, and to its success, are well-known. St. Joseph’s current position as one of the leading institutions of higher education in this region is directly due to her efforts,” said SJC President Donald R. Boomgaarden, Ph.D.

Becoming a Leader at SJC Brooklyn

Thanks, S. Elizabeth, for all your accomplishments at SJC. I’m particularly grateful for mentioning the Council for the Arts that you initiated.

Congratulations Sister Elizabeth. Thank you for beung an exemplary role model to so many of us.