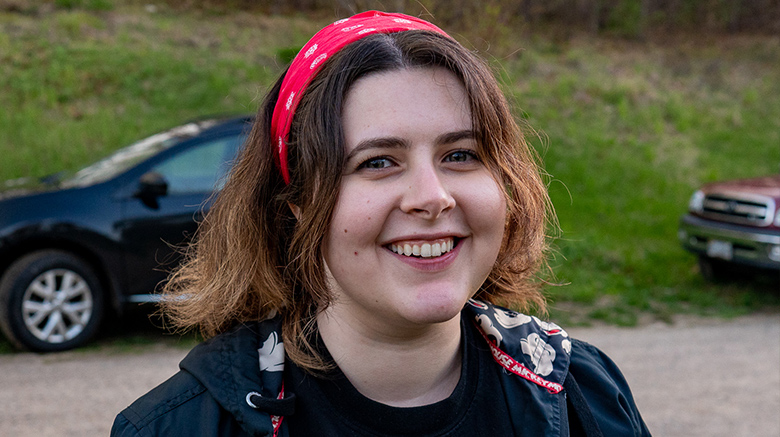 First, she majored in hospitality and tourism management. Then she switched to English.

Now, she’s working toward an MFA in Writing for Film and Television.

SJC Long Island alumna Kathleen Spica ’20 is thriving in Emerson College’s program — through which she’s had the chance to speak with such Hollywood professionals as Mara Brock Akil (“Girlfriends,” “The Game,” and “Being Mary Jane”), Alex Cox (“Repo Man” and “Sid and Nancy”) and Bill Hader (“Saturday Night Live,” “Skeleton Twins,” “It Chapter Two,” and “Barry”).

“I won’t lie, I was most excited to talk to Bill Hader,” Spica, 23, said. “‘Barry’ was one of the shows that got me interested in writing for TV, and Bill Hader is one of my comic inspirations, so talking to him over Zoom is one of the top five moments in my life.

“We were able to ask him questions about writing ‘Barry,’ about his process, and even about a few other personal things,” Spica continued. “Getting to talk to one of my greatest writing inspirations, virtual face-to-virtual face, was such a game changer. I am so grateful for the experience.”

A Passion for Writing

Although Spica originally pursued an undergraduate degree in hospitality and tourism management (HTM) with the goal of working either in a hotel or a Disney theme park, her passion for writing existed long before her change in major at St. Joseph’s College.

“All throughout my life, I wrote stories,” the Smithtown native said. “Writing was always my favorite hobby. Unfortunately, writing was something I didn’t really think I was good at, nor was it a ‘viable’ career option that would make me any money. After taking a few English classes, however, I quickly realized there’s nothing else I could really do.”

The decision to switch majors was easy, she said.

“It wasn’t that I didn’t enjoy my hospitality courses, they just didn’t excite me the way my few English courses had,” explained Spica, who ended up minoring in HTM. “At the end of my sophomore year, I handed in my forms to change to be an English major. It was such an easy choice for me, it felt so natural.”

Her interest in film stems from her time at St. Joseph’s College, where she took film courses with Peter Mascuch, Ph.D., and Thomas Grochowski, Ph.D., both associate professors of English. Dr. Mascuch is also the coordinator of the film/media studies program at St. Joseph’s.

“Without their courses and their own passion for the subject matter, I doubt my own interest in film would have grown. Dr. Mascuch, Dr. Grochowski, and Dr. Phagan were all pivotal members of my growth at SJC and are the reasons I am where I am today,” Spica said, adding thanks to Judith Phagan, Ph.D., professor and chair of the English department.

Spica decided to pursue an MFA because of her time at SJC Long Island.

“I originally wanted to be a fiction writer, but soon realized that I wanted to write dynamic, visual stories,” she said. “Screenwriting is the one part of the film and television production process that is done alone where no one can interfere with your vision.”

Through the MFA program at Emerson College, Spica’s had the chance to create two short films, develop a script for an original pilot and for a show currently on TV (called a spec script, which she did for the show “Barry”), pitch ideas to successful producers and directors, and develop an original feature. She also worked as a PA on her friend Peter Hogan’s first feature film, “How to Rob.”

“I would love to eventually write and produce my own feature,” said Spica, who expects to graduate in May 2022. “A loftier goal of mine would be to work on a ‘Star Wars’ project or adapt a popular book series to TV or film (I’m open to any and all). Making money is important to me, but it’s even more important that I’m doing something I love and that I don’t run myself into the ground and burn out.”

Spica hopes to move out to Los Angeles after graduating, where she is also interested in becoming a professor and teaching film — much like the professors who inspired her at St. Joseph’s.

“You don’t need to monetize all of your art,” said Spica, who hosts a podcast called “Raters of the Lost Arts” with fellow SJC alumnus Craig Saputo ’20. “I think it’s important to take some time just to create without expectation and share it with the people you love.”

SJC Long Island students interested in the topic of writing for film and television can register for ENG 106: Dramatic and Visual Writing, being taught by Dr. Mascuch in spring 2022.

Getting Ready to Study Abroad

Inspired by the Leadership of the Sisters