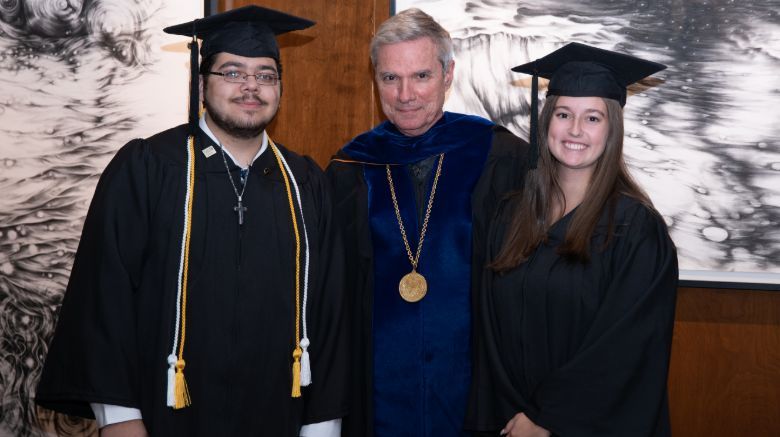 The event recognized members of the Student Government Association (SGA), campus clubs and organizations, and national and international honor societies, as well as recipients of various scholarships.

Students Emily Feit and Christopher Lo Re received the Thomas J. Wendt Alumni Scholarship, which is awarded annually to a continuing student in recognition of their service to the College and local community, as well as their success in the classroom. It is given in remembrance of Thomas Wendt ’88, a former student and employee who was dedicated to volunteerism and charitable causes, and who embodied the five pillars of St. Joseph’s College.

Lo Re also received The Congregation of the Sisters of St. Joseph Endowed Scholarship, which provides financial support to a student who chooses to live a life characterized by service to God and the community without reward. This scholarship was created in recognition of the vision of the Sisters, their fortitude and wisdom in their decision to create and design an institution of higher education for students who aspire to these virtues.

The following recipients received scholarships based on a combination of their outstanding academic achievements, class rankings, noteworthy SAT scores, participation in extracurricular activities and leadership potential:

S. George Aquin O’Connor assumed the presidency of St. Joseph’s College in 1969. Under her direction, SJC became coeducational, established a branch campus in Brentwood (which led to the creation of SJC Long Island), inaugurated the School of General Studies and established the College’s graduate program. She retired in 1997 after 28 years as president. She passed away in 2007.

An entering freshman female student who demonstrates outstanding academic promise and financial need is considered for this full-tuition award.

An entering freshman with an outstanding record of academic achievement is considered for this four-year full tuition award.