Students, faculty, staff, alumni and local community members gathered on campus in remembrance of the 20th anniversary of the terrorist attacks 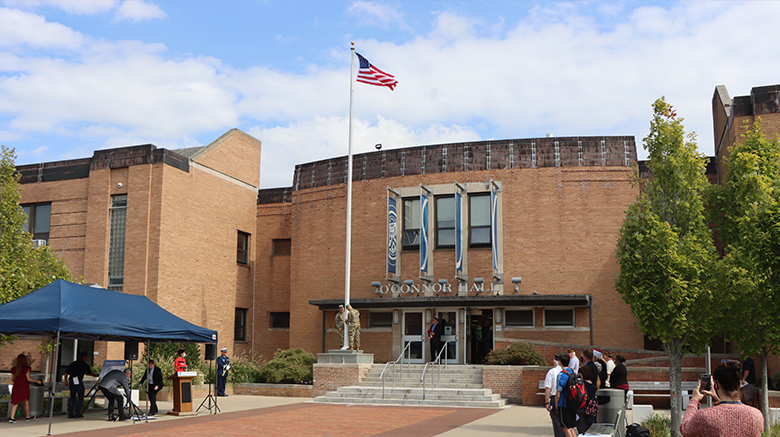 Erin D’Eletto, director of the Office of Military and Veteran Services, led the annual event, during which members of Brooklyn’s U.S. Army Recruiting Station Sgt. Brandon M. Ferraro ’20, M.S. ’21 and Staff Sgt. Juan C. Sanchez participated in the traditional changing of the campus’ American flag. The event had originally been scheduled for Thursday, Sept. 9, but was postponed due to poor weather conditions.

“We gather today to never forget the thousands of lives lost on that tragic day, and those lost in its aftermath,” D’Eletto said. “We gather to acknowledge the unending sorrow of their loved ones. We gather to recognize the heroic efforts that saved many, many lives. And we gather to honor our veterans and service members, who have and who continue to protect us and the homeland from further harm.”

Remembering the Heroes of 9/11

St. Joseph’s President Donald R. Boomgaarden, Ph.D., who led the ceremony’s opening remarks, encouraged the audience to try and live like the heroes who stepped up and risked their lives on 9/11.

Guest speaker Charlie Gambino ’18, MBA ’19, a board member of the 9/11 Responders Remembered Park in Nesconset and who was 5 years old and in kindergarten at the time of the attacks, spoke of his desire to help advocate for the responders who became sick due to their exposure on 9/11.

“I wanted to do the best damn job I could with honoring the legacy of those who had fallen ill and died due to a 9/11-related illness, and ensure they are remembered for the generations,” Gambino said. “It’s this goal and objective that brought me to the 9/11 Responders Remembered Park.

“It represents the selfless sacrifice of those who, without prejudice, tried to rescue those who may have still been trapped under the rubble at Ground Zero, or tried to recover the remains of an individual so their family could have some form of closure,” Gambino said of the park.

‘Be the Match’ Club Born From a Desire to Help Others