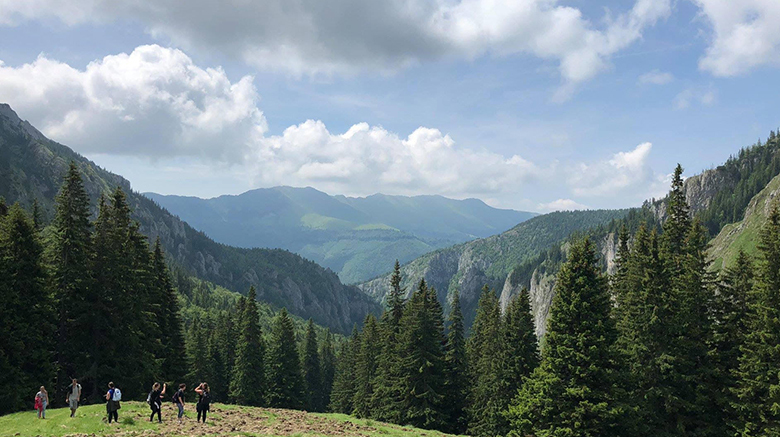 St. Joseph’s College students enjoyed all that and more while studying abroad in Romania, Poland and Oxford this summer.

“We became our own family,” Medford, New York, native Emily Heiser said of the group of students she traveled with to Romania. “We supported each other, solved our problems together, laughed and cried together. It was such a bonding experience. I never knew so many people could connect so quickly together.”

“The purpose of going to Romania was to see the effect of communism on Romania,” DiBlasi said. “Communism in Romania has led to a corrupt government, as well as people not trusting one another. We partnered with an organization in Romania called New Horizons that works to re-establish trust among Romanians. On a larger scale, the purpose of this trip was to see the effect of the environment on an individual. It allows us to answer the question, ‘How did I become who I am?'”

Murphy, adopted from Bucharest, Romania, at the age of 2, was ecstatic about the opportunity to return to Romania.

“Romania is such a beautiful place, yet it has so much pain and misunderstanding behind its history,” he said. “My favorite memory of the trip was listening to the students speak so highly of the country and watching them all fall in love with Romania. Witnessing them fall in love with the country for their own emotional reasons was so empowering and beautiful. Our students are such wonderful people, and I admired their ability to embrace Romania.”

This trip served as a learning experience for many of the students, exposing them to a different culture and different ways of living.

“What I learned most from this trip was to appreciate everyone and everything,” said Heisler, 21, who will be graduating from SJC Long Island with a Bachelor’s degree in psychology and criminal justice in January 2019. “So many people take things — and people — for granted. But in Romania, they live with only what they need, and they are happy! They enjoy each other’s company. I have learned to appreciate living a simpler life and not get caught up in the latest trends.”

Fifteen students from SJC Long Island traveled to Romania this summer as part of this study abroad trip.

“Besides all the trips to the salt caves and museums, I’d have to say my favorite part was the actual ambience of the country, specifically the city we were in,” Nicole Salas, 18, said. “The people were so lively and active, and the nightlife was insane; it was honestly like New York City times 10.”

The students stayed in Krakow, Poland, but they also traveled to Zakopane and Częstochowa during the trip.

“I learned how truly different the education system is in Poland compared to the United States,” said Salas, an adolescence education major with a concentration in math at SJC Long Island. “Not only is the structure and progression through grade school different, but there are also huge differences in what is being offered and taught.”

Bogumila Lai, Ph.D., an associate professor of mathematics and computer science at SJC Long Island, led the students in Poland. This excursion was part of a program that Dr. Lai developed. Students on the trip experienced math education at the college and high school levels.

One of Dr. Lai’s partnerships brings the students to a school considered to be Poland‘s version of Massachusetts Institute of Technology, AGH University of Science and Technology. Another partnership brought the students to the second-oldest school in Central Europe, Jagiellonian University, which Copernicus attended. During their time in Poland, students also toured various museums and landmarks in cities throughout Poland, with Dr. Lai, who speaks Polish.

“The country really gave me a different outlook,” Salas said. “The overall atmosphere of the country and the people residing in it is very calm. It is culture- and history-oriented, and that resonated really strongly with me and helped me better appreciate the importance of history as a whole.”

Salas was one of two students who went to Poland on the faculty-led global studies trip.

Ten students from SJC Long Island and four from SJC Brooklyn studied in Oxford, England, this summer as part of an annual St. Joseph’s College Honors Program excursion. While there, they examined the area’s rich history and the concept of place.

“One of the challenges is connecting academic study with the world outside the classroom,” said Wendy Turgeon, Ph.D., interim executive dean, as well as professor and chair of the philosophy department. “The Oxford Experience allows us to read about history and philosophy, and then confront the places and spaces where ideas were born and lived — and often were challenged.”

Students were accompanied by Dr. Turgeon and James Blakeley, Ph.D., professor and chair of the history department.

“The students formed a genuine community, supporting one another, both academically and personally,” Dr. Turgeon said.  “Dr. Blakeley and I really enjoyed the opportunity to bring history and philosophy alive as we collectively explored Oxford, Salisbury, Stonehenge, and the other sites.”

Check out Dr. Turgeon’s blog to learn more about this year’s trip.

BACK TO SCHOOL, READY TO THRIVE