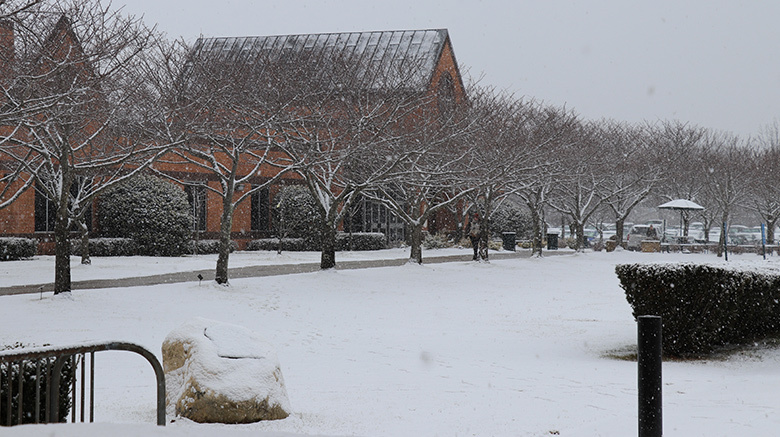 Both SJC campuses were in full swing this February. We dug out from a foot of snow before celebrating Valentine’s Day, and commemorated Random Acts of Kindness Day with our Director of Alumni Engagement Paige Carbone. We highlighted several outstanding students, such as NASA intern Matt Ramirez, vice president of the 9/11 Responders Remembered Park Charlie Gambino and student-athlete Kristen Candelaria.

What did you miss this month? OnCampus has you covered.

The ❄ has returned to SJC Long Island and SJC Brooklyn! Share a pic of a snowy campus and enter for a chance to win a gift card and a #SJCNY prize pack. Include #SJCNYWinter in the post and tag us (📸needs to be public.)

SJC Long Island junior Charlie Gambino ’18 was named vice president of the 9/11 Responders Remembered Park in Nesconset, N.Y. The transfer student, a native of Lake Ronkonkoma, said he is determined to make sure current and future generations never forget the heroic actions of the brave men and women who risked their lives for our nation’s safety in the aftermath of the Sept. 11, 2001, attacks in New York City; Washington, D.C.; and Pennsylvania.

September 11 Responders Fallen But Not Forgotten

SJC Brooklyn’s Kristen Candelaria was selected as one of only 40 student-athletes from across the country to participate in the Division III Immersion Program in Nashville, Tennessee. Held annually in conjunction with the NCAA Convention, the program brings together ethnic minority students to learn more about its governance process, and encourage a further interest in Div. III coaching or administration, in an effort to ultimately diversify the division.

We recognized the heritage, achievements and rich culture of African-Americans in the United States throughout the month of February with a month long series of events hosted by SJC Brooklyn’s Black Student Association and SJC Long Island’s Office of Multicultural Student Life in celebration of Black History Month.

Enjoy the snow day on Thursday and catch up on that school work. Or, get ahead of it. Maybe rest. Perhaps build a snow fort. pic.twitter.com/Mv9bGHGlgu

We highlighted our alumni SJC Sweethearts on both campuses with video tributes to loving couples.

Dozens of SJC Brooklyn alumni have found their #Valentines in #SJCNY’s classrooms and extracurricular organizations. https://t.co/DxSZ4993ZQ

We previewed the upcoming 2017 alternative spring break March 18-24 in Moore, Oklahoma. The annual trip – organized by the Office of Campus Ministry – gives members of both SJC campus communities the opportunity to travel and dedicate their time to helping communities recovering from disaster. Communities across Oklahoma have suffered devastating damage from a series of tornados and earthquakes.

We celebrated national Random Acts of Kindness Day with our resident on expert on kindness: Director of Alumni Engagement Paige Carbone. Here, Paige listed her eight tips to giving back and demonstrated them in an on-campus video. Relive the magic here!

After landing an internship at NASA’s Armstrong Flight Research Center (AFRC); SJC Brooklyn mathematics major Matt Ramirez — a former Chapel Player and a member of the College’s first-ever men’s swimming team — is one step closer to turning his lifelong dream of becoming a pilot and ultimately an astronaut into a reality.

Chris Distefano’s comedy series pilot was picked up by CBS. The Class of 2006 grad’s new show, Distefano, will be produced by How I Met Your Mother creators Carter Bays and Craig Thomas. “Doing comedy and entertainment is what I’ve always wanted to do,” Distefano told the St. Joseph’s College Alumni Magazine in fall 2013. “I know I’m not a celebrity or a millionaire, but I feel like I’ve made it.”

The SJC Nicaragua Project entered its 10th year of GSL programs with Subtiava this January. Over the years, the program has done smaller projects such as building and repairing homes, to more sustained commitments such as conducting a women’s writing workshop, and providing support for a preschool and children’s scholarship program.