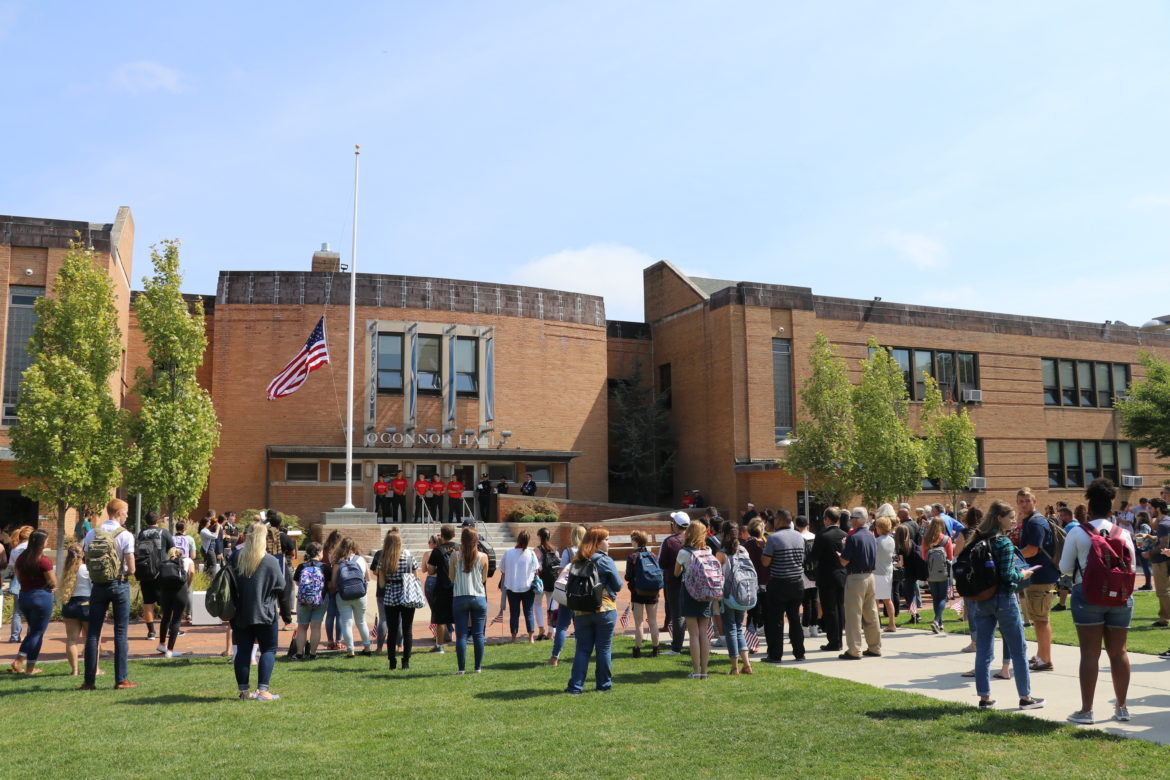 U.S. Army Sergeant D’nellio Bennett used one word to describe his country on the 18th anniversary of the Sept. 11 terrorist attacks: “United.”

Bennett, a senior biology major and chemistry minor, proudly wore his Army uniform at SJC Brooklyn during the campus’ annual 9/11 Service Fair, one of several events held Wednesday on St. Joseph’s College’s two campuses to honor the victims of the Sept. 11 terrorist attack.

“I feel very proud that St. Joe’s pays so much homage to those who are serving, those who have served, and those in other forces — like the police department and fire department,” said Bennett, an Army reservist. He has been in the Army for 11 years; he spent five of those years in the reserves.

Melissa Whiting, also a senior biology major and, like Bennett, a member of SJC Brooklyn’s Student Veteran Association, agreed with Bennett that there is a strong sense of unity in the country surrounding 9/11 — despite the magnitude of loss and destruction the country sustained.

“It brought the U.S. together, but at the same time it was a tragedy,” said Whiting, whose father and husband are veterans.

What Made Us One

At SJC Long Island, Director of the Office of Military and Veterans Services Erin D’Eletto spoke before a large gathering of students, faculty and staff during a remembrance ceremony in front of O’Connor Hall.

“We never forget the lives we lost, we acknowledge the grief of their surviving loved ones, we recognize the heroic efforts that saved many lives, and we honor our veterans and service members who have and who continue to protect us from further harm,” D’Eletto said.

VFW Suffolk County Commander Dave Rogers enlisted in the U.S. Army in 1990, serving 14 years. Deployed to Ground Zero after returning to New York, he was among the first responders on 9/11. While helping the military with search and rescue efforts, Rogers suffered traumatic injuries, including a broken neck.

“On Sept. 11, I didn’t deploy to a foreign country; I deployed to right here in our home,” said Rogers, who is also commander of VFW Patchogue Post 2913. “That changed me profoundly because, for the first time, I was protecting my country in my country.

“That day, things changed for all of us,” he continued. “As the ashes fell, we became one color. We became one race. It wasn’t about religion, it wasn’t about our differences. It was about what brought us together and what made us one.”

Student Veterans of America President George Poulos, a former U.S. Marine, spoke before leading the campus’ traditional changing of the flag ceremony, and Director of Campus Ministry Cristian Murphy closed the ceremony with a poem.

A Day of Service

Meanwhile, members of the SJC Brooklyn community flowed into Tuohy Hall’s auditorium Wednesday afternoon to take part in the service fair. More than 2,000 people have died from 9/11 related illnesses.

The service fair was organized by the Campus Activities Board (CAB), Campus Ministry and Outreach Club, and Students Taking a Role in Postivitely Empowering Society (S.T.R.I.P.E.S.).

Also on Wednesday afternoon, Rev. Juan Luxama led a highly attended remembrance mass inside the Kennedy Chapel of SJC Brooklyn’s Burns Hall, honoring fallen soldiers and first responders, among others who perished during the terrorist attacks. He had a clear message for those in attendance: hope.

“We stand together,” said Rev. Luxama at the end of the service. “We are overcoming this. We are better than we were before.”