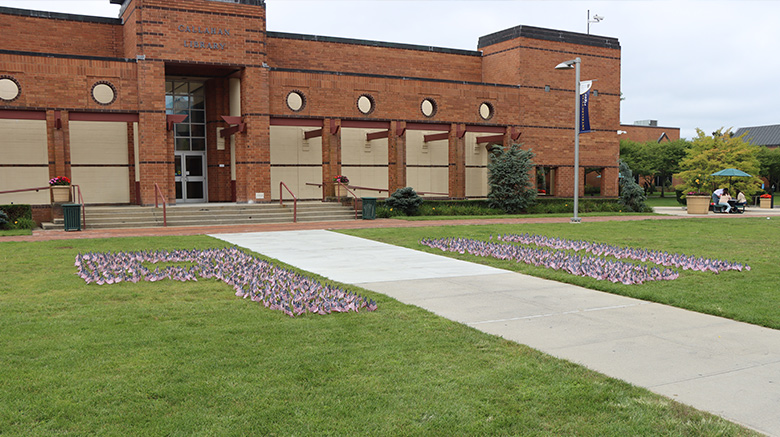 The St. Joseph’s University, New York community honored the victims of the 9/11 terrorist attacks during annual remembrance ceremonies at its Long Island and Brooklyn campuses Monday, Sept. 12, during common hour.

“We gather today to never forget the thousands of lives lost on that tragic day and those thousands lost in its aftermath, to acknowledge the unending sorrow of their surviving loved ones, to recognize the heroic efforts that saved many lives, and to honor our veteran and service members who have and who continue to protect us and our homeland from further harm,” said Erin D’Eletto, director of the University’s Office of Military and Veteran Services.

The Long Island Campus welcomed former FDNY firefighter Gerard Dombrowski during its Changing of the Flag Ceremony in front of O’Connor Hall.

Dombrowski served for 34 years at Ladder 175 in Brooklyn, where he became captain, and as a life member for Lakeland Fire Department (a hamlet of Ronkonkoma), where he has held the position of headquarters captain. He spoke of his FDNY experiences on 9/11 and its aftermath, as well as Lakeland’s loss of five department members on Sept. 11, 2001.

Remembering Alumni Who Died on 9/11

The heart-wrenchingly long list of those who lost their lives on 9/11 — 2,977 killed the day of, to be exact —  includes the names of three St. Joseph’s University alumni: Jennifer Mazzotta ’00, Paul Rizza ’99 and Richard Catarelli ’76.

Mazzotta worked as a young trader at Cantor Fitzgerald. She was engaged to be married at the time of the attack. Rizza worked as an investors services officer with Fiduciary Trust International. Catarelli was a senior vice president with Marsh & McLennan. Each worked at the World Trade Center.

In 2005, the University dedicated a memorial plaque, located in the St. Angela Hall Courtyard at the Brooklyn Campus, recognizing these alumni as well as relatives of St. Joseph’s alumni who died during the Sept. 11 attacks. In 2018, a new set of bushes shaped like the Twin Towers was dedicated in the Quad at the Long Island Campus, alongside a plaque honoring the men and women who were heroes on that day and the days after.

Since 9/11, more than 4,000 survivors and first responders have died from illnesses related to the attack, according to the World Trade Center Health Program.