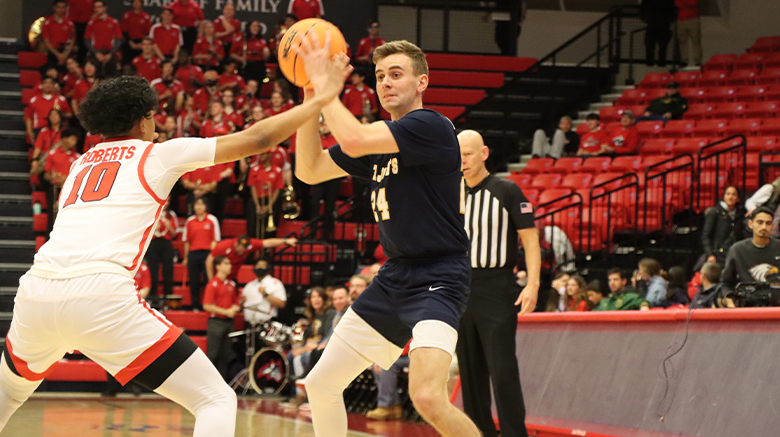 The Golden Eagles – who compete at the NCAA Division III level – held their own in front of over 2,000 spectators for most of the first half against Division I competition.

Despite ultimately dropping an 89-48 decision, the experience was memorable for many Golden Eagles who grew up attending Stony Brook games inside Island Federal Arena.

“Playing at Stony Brook was always a big dream of mine,” said graduate student Matt Hirdt ’22. “Being able to play on this court, it was awesome to finally do it in my fifth year.

“The guys worked hard, and for a good portion of the first half, we controlled the tempo. It was awesome and something I’ll always remember on the basketball court,” he added.

The Golden Eagles led three times in the first half and as late as 6:41 when Ryan McNeeley ’24 drained a three-pointer to put the guests up 29-25.

At halftime, St. Joseph’s trailed 46-33, and after the break the Seawolves showed their quality, scoring 43 of the second half’s 58 points en route to victory.

McNeeley shot 5-for-10 from the field and led the Golden Eagles with 12 points.

More than a game, but an opportunity

Though the contest was an exhibition for the Golden Eagles, the occasion marked significant growth for a program that won just seven games during the 2019-20 season.

Last year, the team posted a 15-9 overall record and qualified for the Skyline Conference playoffs for the first time since 2016-17.

Spencer Malloy ’24 and Alec Tabada ’25 collected a slew of individual honors at the season’s end, including regional accolades from D3Hoops.com.

Malloy appeared on the Skyline All-Conference First-Team, and Tabada was the D3Hoops.com Region 3 and Skyline Rookie of the Year.

“As a commuter school on Long Island, the opportunity for our program to compete against a local Division I team is incredibly unique.” said first-year head coach AJ Uhl.

Though the experience was memorable for current players, the game allowed Uhl to showcase the program to potential recruits.

“Throughout the fall, sharing the news with recruits that we’d be playing against Stony Brook garnered some excitement,” he added.

“We had about 15 recruits at the Stony Brook game that got a chance to see how hard we play and what it takes to be a member of our program.”

Director of Athletics Mel Cope echoed Uhl, adding “not only was it a positive experience for our current student-athletes, but also a great incentive for future recruits and their families.”