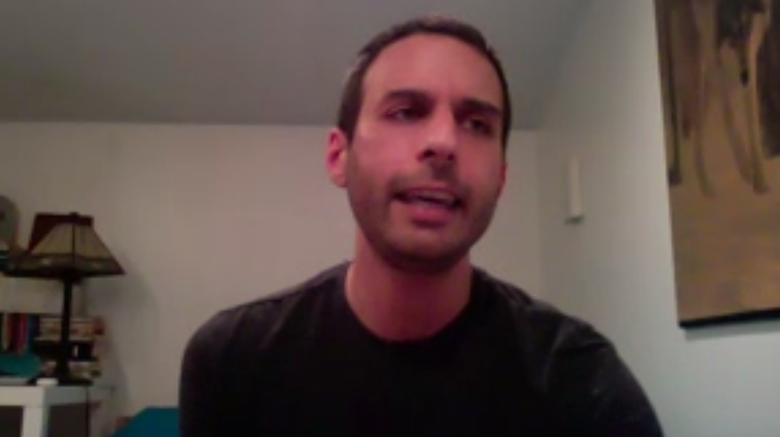 Armed with early successes from book reviewers nationwide, he was ready to hit the ground running to market his book.

But Shah had to change his strategy at the last minute when the coronavirus pandemic uprooted his plans, canceling all in-person events — including his book talk at St. Joseph’s College.

Shah ultimately presented his book virtually through a live Zoom webinar on Monday, April 13, as part of the Brooklyn Voices lecture series, hosted by SJC Brooklyn, in partnership with the Greenlight Bookstore.

Instead of sitting centered on a stage in the Tuohy Hall auditorium to talk about “Whiteout Conditions” as planned, Shah sat at his computer in his Brooklyn bedroom. Writer’s Foundry Director Lee Clay Johnson, who connected to the live Zoom webinar from his bedroom at his parent’s house in Tennessee, interviewed him. 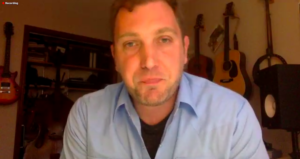 “I’m thankful to still be able to do events like these, but it’s weird,” said Shah, an Illinois native. “Everything is weird right now. Our entire relationship with the outside world has changed, and it happened super quick. There’s a learning curve here for all of us.”

“Whiteout Conditions” began as Shah’s creative thesis, required of each graduating Writer’s Foundry student. The book follows Ant, a death worshipper returning home to Illinois after a long absence to attend the funeral of a friend’s young cousin, who suffered a violent death. As the situation deteriorates, amid a nasty bit of weather, Ant reckons with his roots.

“That was a powerful reading, and it’s from a manuscript I remember well,” Johnson said after Shah read an excerpt of his book. “I experienced this novel in a very early stage of its development … I served as Tariq’s thesis advisor for his thesis called, you guessed it, ‘Whiteout Conditions.’

“Even back then when I read the first draft, the qualities that are still present in it struck me. What we just heard you read — the DNA of the novel is set right there,” Johnson added.

During the webinar, Shah and Johnson talked about how the story developed, beginning from the day Shah found inspiration to write the story. Shah said he remembers flipping through his writer’s notebook feeling defeated when a prior writing project wasn’t working out. As he turned the pages of his notebook, a single line jumped out at him: “I find criminals kind of fun.”

After that, the story rapidly evolved.

“I wanted to come away with something that was as complete as possible,” Shah said. “That was my personal challenge in my MFA — to show that I could do that. I wanted it to be a fast read — I wanted to prove that I could get someone to read 100 pages in a day or two.

“So far, I think it’s been pretty successful.”

Author Kathy Valentine is next up in the virtual Brooklyn Voices lecture series. She will present her book “All I Ever Wanted: A Rock ‘n’ Roll Memoir” on April 20 at 7:30 p.m. during a live Zoom webinar. Lizz Winstead, a comedian, radio and television personality, and a blogger, will interview Valentine during the webinar.