A small community 2,000 miles away has become an integral part of St. Joseph's College. 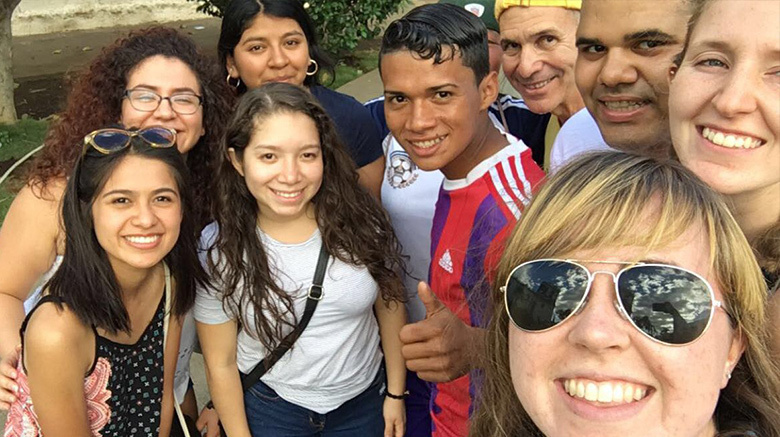 Community is what St. Joseph’s College is all about.

Enrolled students are part of a community of learners at SJC Long Island, SJC Brooklyn and SJC Online. Upon graduation, they enter the 34,000-strong alumni community. And within those broad groups exist smaller collectives: the Golden Eagles and Bears athletic communities; the community of elementary, secondary, ESL and special educators and the student-veteran community, among others.

Over the last 10 years, another distinct community has formed and flourished at St. Joseph’s with one more than 2,000 miles away, in the Subtiava area of Leon, Nicaragua. There, through the St. Joseph’s College Nicaragua Project, SJC students, faculty and alumni have banded together to cultivate a long-serving, global service-learning (GSL) venture.

The SJC Nicaragua Project entered its 10th year of GSL programs with Subtiava this January. Over the years, the program has done smaller projects such as building and repairing homes, to more sustained commitments such as conducting a women’s writing workshop, and providing support for a preschool and children’s scholarship program.

“St. Joseph’s College has done an incredible job at giving its students the opportunity to become a part of a community far away,” said Megan Lavery, a 2016 graduate at SJC Long Island, who was part of this year’s SJC contingent in Nicaragua. “No matter where I am, I carry Subtiava in my heart everyday.”

As the chairperson for the Department of Modern Languages, part of Antoinette Hertel, Ph.D.’s, job is to bring culturally enriching experiences to her students. Dr. Hertel has long been a part of the College’s academic study abroad programs — offering students potentially transformational cultural experiences in Spanish-speaking countries. 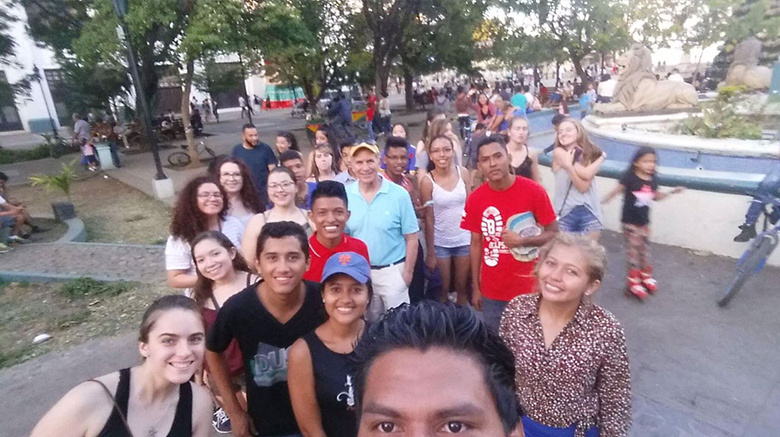 Benito Vargas (foreground) and many of the students (SJC and UNAN) in the Parque Central of León.

Eleven years ago, in the winter of 2006, Dr. Hertel and Thomas Petriano, Ph.D., of the Department of Religious Studies, wanted to bring that global studies experience back to the core essence of St. Joseph’s College. It was their hope to integrate a service element, one of the pillars of SJC’s mission, into international study — to partner with a community abroad and establish a new global-learning course at SJC.

“We wanted to do a course that would bridge the perceived gap between the U.S. and Latin America,” Dr. Hertel said. “It just so happened there was a Long Islander who was living in Nicaragua and had connections with this (Subtiava) community. He spoke to us while we were in the planning stage.”

between the U.S. and Latin America.” – Antoinette Hertel, Ph.D.

That December, Dr. Hertel traveled to Nicaragua to learn more about Subtiava, and to investigate whether there was potential to build a new program with SJC.

In interviews she conducted with the community, “there were over 60 people who wanted to tell us what their needs were,” Dr. Hertel said, noting that Subtiava was experiencing extreme poverty with makeshift homes without suitable rooftops, walls or floors, and sewage running through the edges of the streets. “The need was infinite, largely related to health care issues. It was so big — the people were so open.”

At the start of the spring semester, January 2007, The Nicaragua Project received the green light. Since then, yearly to semi-yearly cross-disciplined service-learning courses on both SJC campuses have incorporated a program in Nicaragua.

“The work is never finished…”

At its core, The Nicaragua Project is an extension of what students are taught in the classroom, augmenting a liberal arts curriculum that emphasizes educating the whole student — one who is eager to listen, learn and aid.

The readings and class discussions during the semester represent various aspects of the Latin American reality, including the culture and colonial history of Nicaragua as well as the Sandinista revolution in 1979. Topics such as human rights, indigenous peoples, liberation theology, colonialism and globalization are all discussed in their various aspects through literary as well as historical and theological texts. This background is essential to the program. Students are then required to reflect on their experience in Nicaragua in light of what they learned during the semester.

“The course very much hinges on action and reflection,” said Dr. Petriano, co-moderator of The Nicaragua Project. “The two are reciprocal.”

“There’s a lot of conscientiousness about not doing tourism of poverty,” Dr. Hertel said.  “We spend a lot of time in the beginning of our courses exposing students to material that questions their motivations. Questions the goals of different types of programs that might be more charity-oriented and less social-justice oriented.

“We make those distinctions between charity and justice with the students,” she added.

The difference between charity and justice is an important one to the faculty members involved in The Nicaragua Project. Where traditional charitable workers will donate food and efforts, their impact may be short-lived. With a focus on justice and understanding root causes for local conditions, The Nicaragua Project generates strong relationships deserving of a true community.

“The course very much hinges on action and reflection.

More and more, students appreciate the distinction between what The Nicaragua Project offers, and voluntourism. The purpose of this service-learning program is to support the projects identified by the College’s Nicaraguan community partner, year after year.

“I think that one of the most important things I witnessed was that the people of Subtiava were the happiest and kindest people I have ever met,” said Erin McDonnell ’17. “We went there to ‘help’ them, because they are ‘poor.’ But, I honestly think they helped me more than I could ever help any of them.” 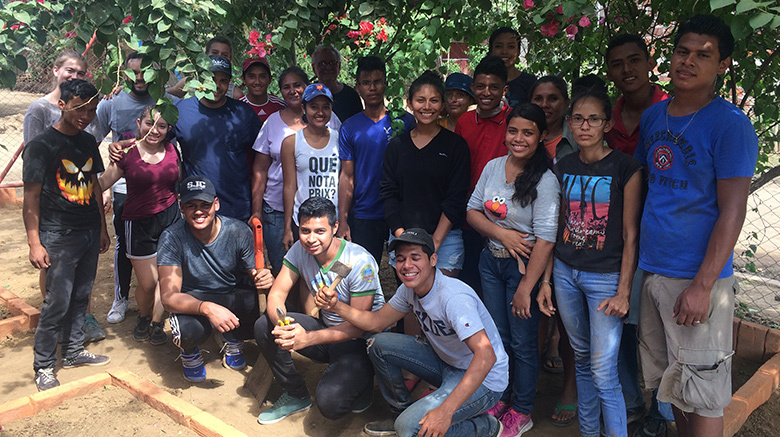 This year’s trip included volunteers in the form of local college students from UNAN (National Autonomous University of Nicaragua).

“The work is never finished,” Dr. Hertel said. “We see a lot of poverty with people who won’t escape the conditions. Our educational project is about them, but we have community partners who tell us what ongoing needs we can fulfill.”

In 2009, a group of SJC alumni formed the Nicaragua Program Alumni Group as a way to continue helping the people of Nicaragua. To date, more than 60 students in Subtiava have been sponsored by members of the SJC community, ensuring that they can attend their local private school. The Nicaragua Project subsidizes the salaries of the preschool teachers at the Preescolar San José, which serves the Subtiava community.

Students who participated in previous programs also formed SJC’s Nicaragua Project Club to enhance and expand upon the works of SJC’s service-learning Nicaragua Project by helping to raise funds and gather supplies, plan for future programs and raise awareness about the project.

This past year, as part of the course “Latin America at the Crossroads” taught by Dr. Petriano and Dr. Hertel, a group of 22 students from both campuses traveled to Subtiava, one of the largest groups to make the trip. This year’s project involved planting a sustainable educational garden at a local public school and renovating the exterior of San José Preschool, which is named after St. Joseph’s College, as well as the construction of a beautiful mural. 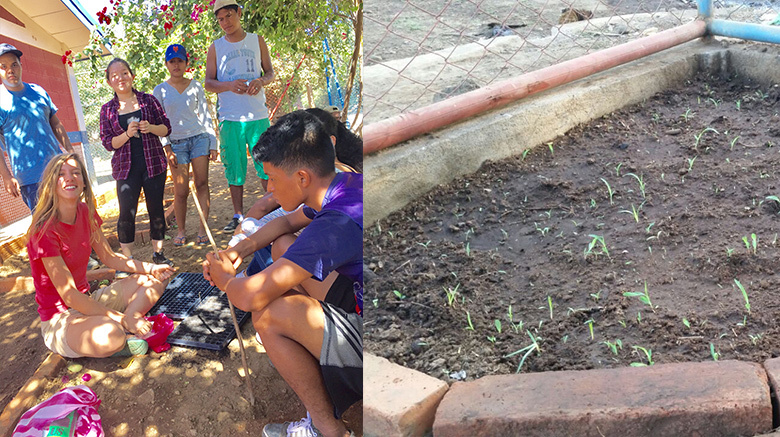 “Community leaders in Subtiava express needs of the area,” Dr. Hertel said. “This year, an educational green space was requested at the K-6 School. When we were asked to participate in this project, we contacted Emily Rehberger in the organization Edible Schoolyard NYC. She agreed to go with us, on her own dime.”

Assistance came in many forms for The Nicaragua Project. The group also had volunteers in the form of local college students from UNAN (National Autonomous University of Nicaragua). Together, the group prepared and fertilized soil for optimal gardening growth.

“For me the most significant development during this year’s program was the collaboration between our students and students from the community of Subtiava who attend UNAN.” Dr. Petriano said. “Our students worked side-by-side with the UNAN students, and in the process some good friendships were formed. Their emerging leadership and commitment was wonderful to see.”

The most significant development during this year’s program was

the collaboration between our students and students

from the community of Subtiava who attend UNAN.” — Dr. Petriano

Six small plots were left by the school, delineated by brick, laid out in such a way that young students could reach plants during garden lessons. 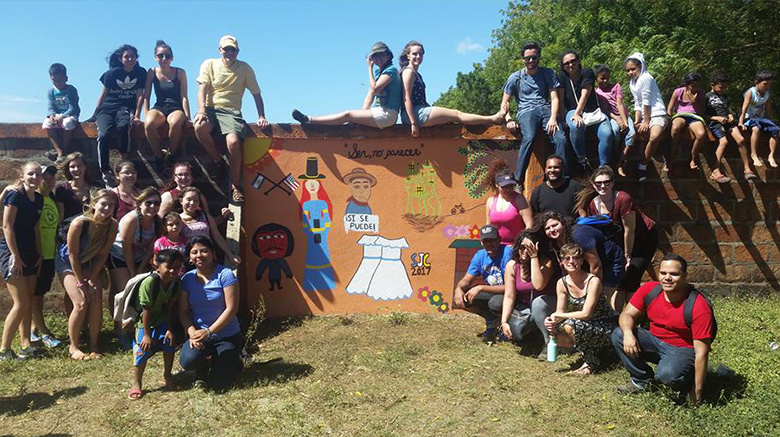 SJC volunteers constructed a mural as a tribute to the culture, heritage and community of Nicaragua.

In addition to the plots, students completed a mural project that paid homage to Nicaraguan culture.

“We incorporated the unity between SJC and Subtiava,” said Jasmin Tobon.” We wanted to show the community that we appreciate them welcoming us with open arms. A group volunteers spent two days to complete this mural — and a new familia was born out of the tireless work.”

As always, the SJC students enjoyed the new friendships with their Nicaraguan counterparts.

“I no longer see Subtiava as an outside community,” said Lavery, who also participated in The Nicaragua Project while she was a student at SJC. “I am a part of them and feel at home when I am with them.

Other students found their first experience in Nicaragua to be eye-opening.

“The trip was amazing.” Isabel Ospina, an SJC Long Island student. “Not only because of the native families we bonded with, but the families we built within our own student body. The sharing of the experience of this new culture were what I took away from this trip the most… That, and you can never have too much bug spray.”

Ultimately it is the impression left behind with the existing community members that makes the biggest difference.

“My experience was something incredible and very beautiful,” said Benito Vargas, a student at UNAN. “We started working in the garden as two groups, and ended up being one family. We hope to see our friends again in the future. They are a group and a family with a great heart.”

Dr. Hertel and Dr. Petriano are planning a Nicaragua Program honors course for 2018 and said they hope additional departments at the College participate in The Nicaragua Project. A single exploratory trip in 2006 has grown into a flourishing community of hundreds of SJC and Subtiava citizens. As the possibility for additional global service projects manifest on the horizon, it’s vital to remember the simple efforts put forth by a conscientious few that made it possible.

If you’d like to participate in an upcoming Nicaragua Project program, contact Dr. Petriano, Dr. Hertel or nicaragua.li@student.sjcny.edu.

Hey! First meeting is 3/2 room N-213 during common hour. Oh, and did I mention there will be pizza?? Happy Valentine’s Day. –Nica Proj