Home Featured The Sharks Among Us
FeaturedLong Island

The Sharks Among Us 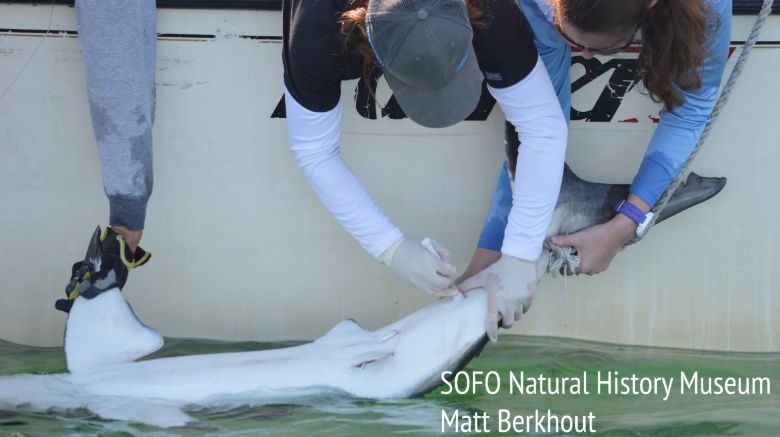 The habits and make-up of those and five other shark species that inhabit the waters around Long Island, New York City and New Jersey are becoming quite familiar to SJC Long Island graduate Matt Berkhout. The Westhampton High School biology teacher — who is also an adjunct professor in the biology department at his alma mater — is a key member of a group of scientists conducting a years-long shark research project in the Atlantic Ocean, between Cape May, New Jersey and Montauk, New York. 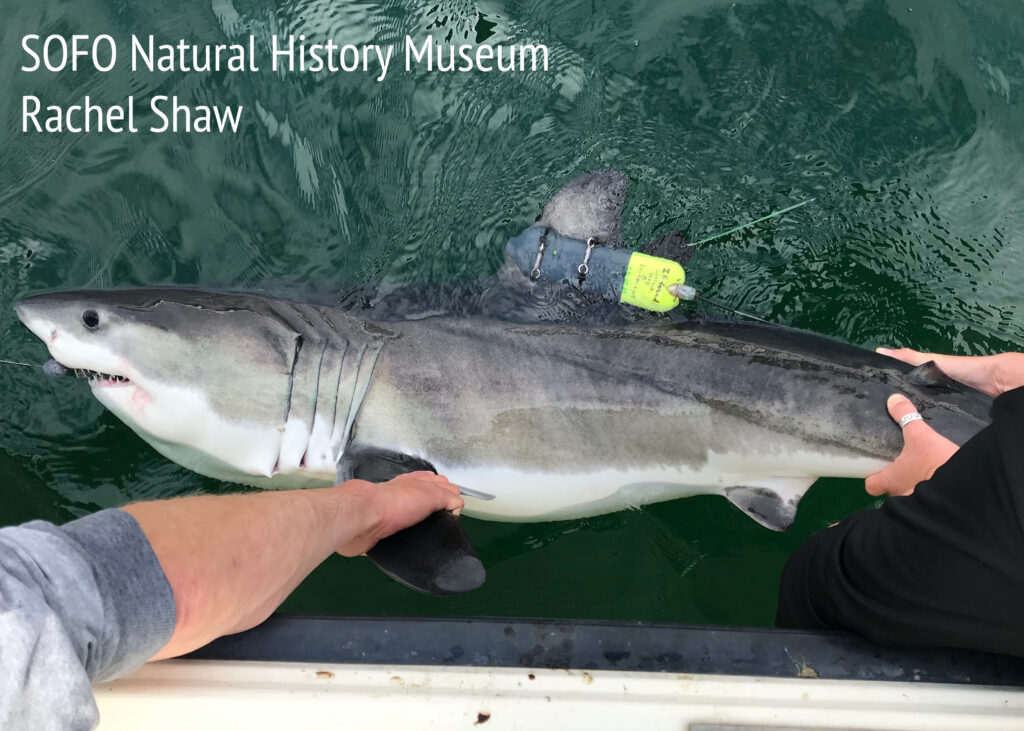 A CATS tag is secured for deployment on “Annette,” the second White Shark caught by Berkhout and First Mate Walter Zublionis, and the first YOY shark ever tagged with this cutting-edge tracking device.

“As much as many people fear predators, we know the healthiest ecosystems have healthy numbers of predators,” said Berkhout, who earned a B.S. in Biology with a Concentration in Adolescence Education from SJC Long Island in 2009. “Their role is to keep the populations of their various species of prey in check, and when the predators are not around, shifts in the balance are likely to occur.”

Since the project began in 2015, the scientists have focused their research on  “young-of-the-year” (YOY) sharks in the New York Bight — the triangle of ocean waters between the southernmost tip of New Jersey and the easternmost point of Long Island — to better understand the balance of our ecosystem. 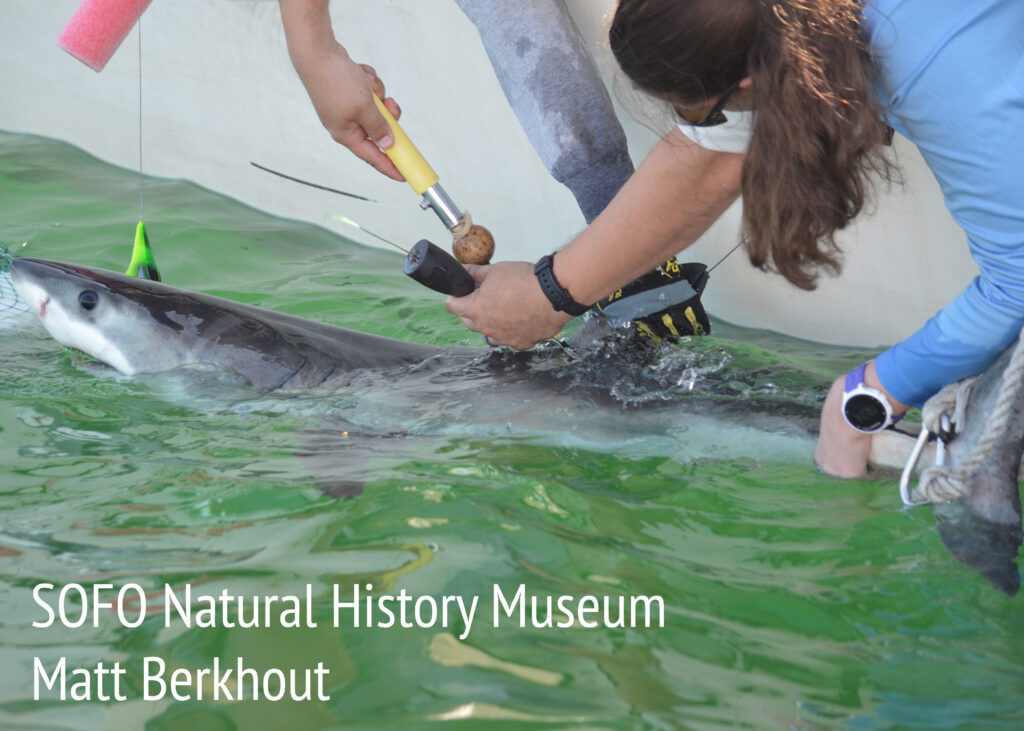 Dr. Curtis attaches a PSAT to a YOY White Shark with help from Rachel Shaw and Metzger.

The data collected from the juvenile sharks — including blood, fin clips, muscle tissue biopsies and parasites — provides a more in-depth look into the anatomy, physiology, pathophysiology, diet, genetics, trophic roles and overall health of the predators.

“We have achieved several scientific firsts for North Atlantic White and Thresher Shark research, including the first-ever deployment of a CATS (Customized Animal Tracking Solutions) tag and camera on an adult Thresher Shark, as well as a juvenile, young-of-the-year White Shark,” said Berkhout, who’s chief role in the research is that of captain: keeping his research crew safe aboard the vessel, and finding fish.

“Working with our chief scientist, Dr. Tobey Curtis of NOAA, and Capt. Greg Metzger (the SOFO chief field coordinator), fishing locations are chosen. Then, tackle, baits and techniques employed on any given day are my call,” Berkhout said. “If we don’t catch sharks on my boat, I own that as captain. If someone gets hurt, that’s worse. But we made it injury-free this season — no tangles, hookings or man-overboards.”

To date, the team has tagged 30 sharks.

How Berkhout Got Involved

It was through a network of science educators that Berkhout met Metzger, who has tagged sharks since 2002 as part of an ongoing Long Island Shark Exhibit funded by SOFO. 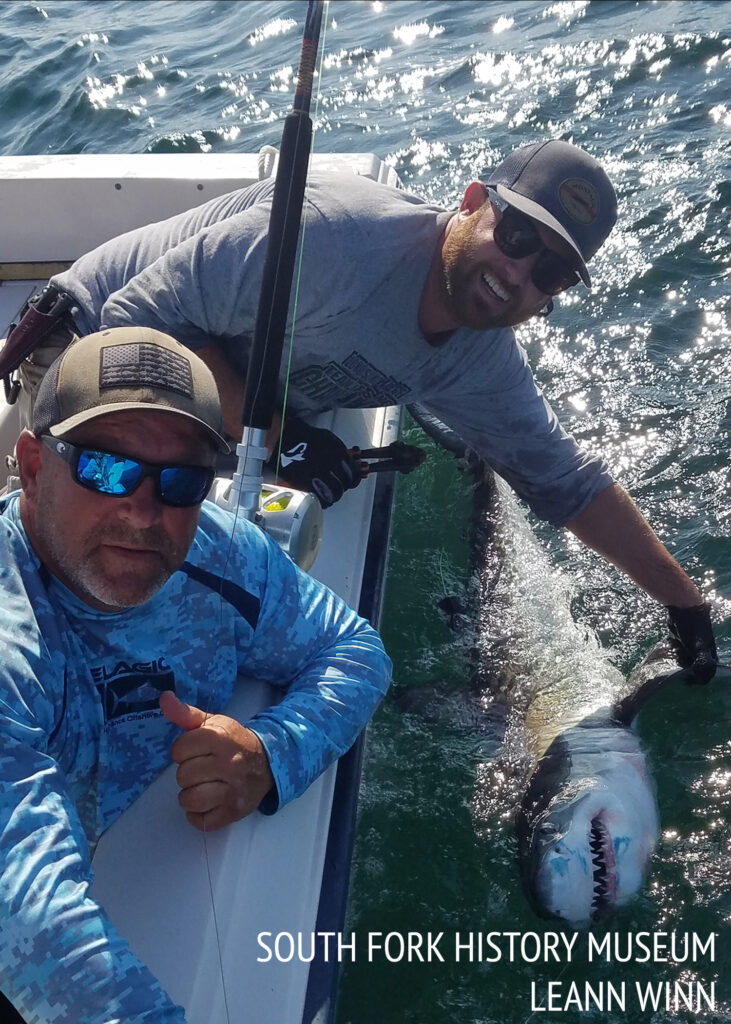 Zublionis (foreground) and Berkhout with “Salty Sailor,” their first YOY White Shark caught of the 2019 expedition.

“We became friends while fishing together,” said Berkhout, a native of Patchogue, New York. “Once I earned my captain’s license, (Metzger) invited me to officially join the team and operate my boat as a second research vessel — essentially doubling the team’s chances of access to these elusive animals.”

As someone who spent much of his youth lifeguarding on Long Island’s East End, Berkhout enjoys aquatic research.

“Let’s face it, fishing is exhilarating,” Berkhout, 34, said. “But what really gets me excited is that we are combining cutting-edge technology with novel techniques to answer questions about one of the most mysterious species on the planet. The tags we deploy on these animals are collecting all sorts of data: GPS locations, temperature, depth, velocity, acceleration, directional movement and, in some cases, even first-person video of the sharks’ activities.

“The new technology has reduced limitations on what we can learn, making way for real progress. I’m also incredibly lucky to be surrounded by some very smart people working really hard, asking the right questions and interpreting data in meaningful ways,” he added.

A Passion for Biology

It was a search for answers to his scientific questions that spurred Berkhout’s interest in biology.

“I think everyone wonders about what they’re made of, or how things work, or why sometimes they don’t,” he said. “These questions led me to science, where I’ve found a few answers, far more questions and, most importantly, a system for generating new investigations. I’ve always been interested in studying connections within and between systems of all sizes. That’s the beauty of researching the ocean’s systems — a limitless number of systems on every scale.”

Fuel Up with a Discount