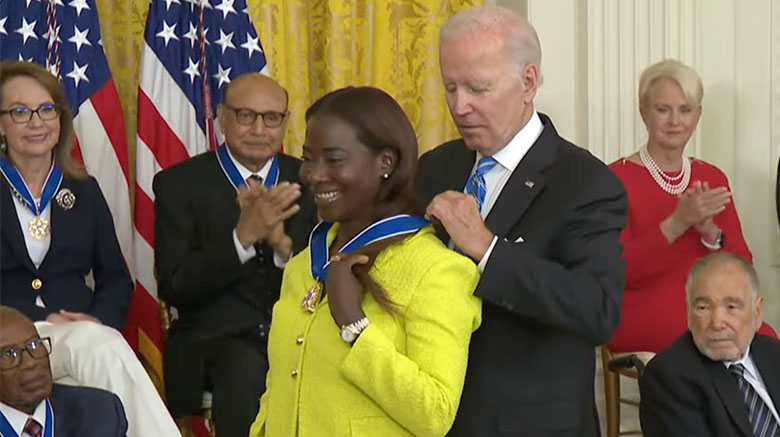 President Biden thanked Dr. Lindsay — a critical care nurse manager at Long Island Jewish Medical Center — for her tireless and heroic work serving on the frontline at the height of the COVID-19 pandemic and becoming the first American to be vaccinated against the virus outside of clinical trials.

“As director of nursing and critical care at a hospital in Queens in the heart of the pandemic, she poured her heart into helping patients fight for their lives and to keep their fellow nurses safe,” Biden said. “Sandra, as I told you before, if there are any angels in heaven, they are all nurses.”

The recipients come from varying backgrounds; each has played a unique role in making the country a better place.

In early December 2020, Dr. Lindsay learned she would become the first person in the United States to be vaccinated against COVID-19. She strode into her hospital’s conference room and sat down before she realized what was about to come. Former New York Gov. Andrew Cuomo was on the conference room screen telling her that she would be first to get the shot.

Dr. Lindsay received her two vaccination shots on Dec. 14, 2020, and Jan. 4, 2021. She told OnCampus last year she didn’t hesitate to receive the vaccine because she wanted to play a role in stopping the spread of the deadly virus. She and her colleagues saw firsthand the devastation wrought by COVID-19 and how imperative a vaccine was to fight the virus.

Biden during the ceremony noted that the empty Pfizer-BioNTech vial, vaccination card, hospital identification badge and scrubs worn by Dr. Lindsay when she received her first vaccine are now part of an exhibition in the Smithsonian’s National Museum of American History.

“This prestigious honor is yet another validation of Sandra’s heroism during the pandemic. She fought the virus on the frontline and ultimately made history by rolling up her sleeve and becoming the first American to be vaccinated against COVID-19,” Dr. Boomgaarden said. “We are humbled and extraordinarily proud to count Sandra among our alumni.”

Medal of Freedom reflects Dr. Lindsay’s Dedication to Help Others

A drive to serve her community comes naturally to Dr. Lindsay.

Originally from Jamaica, she emigrated to the U.S. in 1986, at 18 years old, in pursuit of her goal of becoming a healer. She received a nursing degree from St. Joseph’s in 1999.

Her Presidential Medal of Freedom citation reads that “She represents the best of America.”

“At the height of the pandemic, she directed a team of nurses, as they worked tirelessly to save patients while risking their own lives,” reads the citation, read aloud as Dr. Lindsay received her medal from Biden. “When the COVID-19 vaccine became available, she was a ray of light in our nation’s dark hours and continues to champion vaccinations and mental health for health care workers.”