When it was time for Cleyvis Natera to get serious about writing her debut novel — “Neruda on the Park” — she knew she had to restructure her life to revolve around creative writing. She quit her corporate job and began working as an instructor at the Writer’s Foundry at St. Joseph’s University, New York’s Brooklyn Campus. 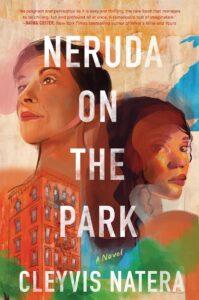 “I find that teaching creative writing helps me become a better writer,” Natera said. “For me, I’m one of those people who only teach books that I feel passionate about. Both the act of teaching literature from a craft perspective, and then workshopping students, really helps me become more in tune with what is the best way to do something, and to do my own writing.”

Her plan came to fruition last month when she released “Neruda on the Park” on May 24.

Published by Penguin Random House, the book tells the story of an immigrant community in New York City that comes under threat of gentrification when a developer enters the neighborhood with ambitious plans to build luxury condominiums. Many people in the community know what that means: displacement. The story follows a family in the community and shows how they deal with the looming gentrification.

Inspired by the World Around Her

Making time to write was far from easy.

Natera started writing the book in her late 20s, explaining that it was “slow going” because she was still working a full-time corporate job. Her early 30s came with more distractions, between getting married and having children.

“There were several years when I put the book away,” Natera said. “It was only about four years ago that I made a decision that I really wanted this book to be out in the world. And so that’s when I came back into the writing community, and I became very serious about trying to find a path to publication of the book.”

“A lot in my life changed in 15 years,” she continued. “I think a lot of that is reflected in the book because of how much I changed during the time I was writing it. “ 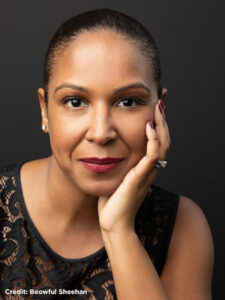 Many of the book’s themes were inspired by Natera’s life. She moved from the Dominican Republic to the United States with her family when she was 10 years old. Growing up in Harlem and Washington Heights, she learned about the changes that happen in neighborhoods because of displacement and gentrification first-hand.

But Natera’s biggest inspiration was community.

Natera said she put her whole heart into her debut novel — so the past several months leading up to publication have, understandably, been bursting with emotion.

Once her novel was ready, she sent it to authors she loves to read, asking them to share a blurb endorsing it if they liked it.

“It was very nerve-wracking getting my book out to all these people who I admire so much and whose books I loved because I was like, ‘If they don’t like my book, I’m just going to be destroyed!’” Natera recalled. “I was fortunate because every single person came back and gave me some really wonderful words of endorsement, so that was a high-high.”

That was just the start of her positive book reviews. “Neruda on the Park” is already gracing several book lists — including a roundup of must-read new releases on NBC’s Today show. It also received a positive review in the Summer Reading edition of the New York Times Review of Books.

Clay Johnson said he, and the rest of the Writer’s Foundry, are proud of Natera’s accomplishment.

“Cleyvis Natera is that rare combination of both a talented writer and a gifted teacher,” Clay Johnson said. “She is a refreshingly authentic presence here on our Brooklyn Campus, always making time for students, while taking her own work seriously.

“She balances teaching with the demands of creation, always while exhibiting her own brand of warmth and intellect – which centers on her experience as an immigrant,” he continued. “Cleyvis believes that community is the surest way to gain the confidence to find our authentic voices as writers, and to gain the skills to reflect, then transform through our art the conditions of our society. She is incomparable as a writer who is as committed to her own excellence in her craft as she is in her students gaining the skills to become better writers.”

A Field You Can Count On